Boulevard Room C (Hilton Chicago)
C. Rossignol (LEPMI, Université Grenoble Alpes-CNRS), G. Constantin (Université Grenoble Alpes-CNRS, LEPMI), P. Briois, A. Billard (IRTES-LERMPS), E. Djurado (LEPMI, LEPMI, France), and L. Dessemond (Université Grenoble Alpes-CNRS, LEPMI, France)
The challenging issues for the development of solid oxide fuel cells (SOFCs) include lowering the operating temperature down to 700 °C (IT-SOFC) in order to increase their lifetime and reduce the overall cost. Consequently, the overpotentials generated at the cathodic interface and the decrease in ionic conductivity of the electrolyte resulted in a loss of performances. Today, doped-lanthanum cobaltites (LSCF) [1–2] are known to be promising cathodes because of high mixed ionic and electronic conductivities. However, the major problem is the chemical reactivity between LSCF and the typical yttria-stabilized zirconia (YSZ) electrolyte. The reactivity between LSCF and YSZ starts above 1000 °C, inducing the formation of insulating phases in ionic conductivity (SrZrO3 and La2Zr2O7 )[3]. This reactivity is due to the diffusion of Sr and La, which results in the destabilization of LSCF structure at higher temperature. In order to improve the electrical performances of the cell by limiting the diffusion of cations, a buffer layer, based on gadolinia-doped ceria (CGO) [4-5], is usually deposited between the LSCF cathode and the YSZ electrolyte. A dense CGO interlayer has been reported to improve electrical performances of the cell and to favour Sr2+ [5] retention but no effect of the CGO thickness has been reported in the literature on its efficiency to improve the durability of the cell.

LSCF/CGO/YSZ half-cells were consisted in a dense Ce0.9Gd0.1O2-δ buffer layer, with different thicknesses (0.11, 0.45, 1.11 to 2 mm), prepared by DC magnetron sputtering on a homemade YSZ substrate. Porous La0.6Sr0.4Co0.2Fe0.8O3-δ cathode layer, 4 mm thick, was fabricated using electrostatic spray deposition [2]. The microstructure, thickness, crystalline state and composition of films have been characterized respectively by FEG-SEM, X-ray diffraction and microanalyses. An aging investigation of all LSCF/CGO/YSZ half cells was performed for 550 h in air at 700°C, using electrochemical impedance spectroscopy (EIS). Spectra of LSCF cathode were recorded at OCV using a Solartron (SI 1280B) potentiostat/galvanostat frequency response analyzer with frequencies ranging between 0.01 Hz and 20 kHz. For the electrolyte CGO/YSZ system, impedance measurements were carried out using a HP 4192 measuring unit within the frequency range from 5 Hz to 13 MHz.

EIS measurements have shown that the initial electrolyte series (RS) (Fig.1a) is strongly decreased from 80 to 40 Ω.cm since a 0.11mm thick CGO layer is added due to the enhancement of the ionic current collecting between YSZ and LSCF. After 550 h, a low RS variation is observed and becomes weaker with CGO layer due to a better contact. The relative Rpol variation after 550 h, is strongly reduced to reach a minimal value of 57% when the CGO layer is only 0.11 mm thick with comparison to 677% on the LSCF/YSZ system without CGO layer.

The electrode response resulted from a major contribution at high frequency (HF) (Fig. 2a) and a minor one at low frequency (LF) corresponding to cathode-electrolyte interface and oxygen-cathode exchange, respectively. These EIS data are consistent with X-ray microanalysis where Sr2+ migration was only detected at LSCF/YSZ interface.

The lowest Rpol and the lowest relative Rpol variation, has been observed for an optimized CGO thickness of only 0.11 mm, after 550 h at 700°C in air. 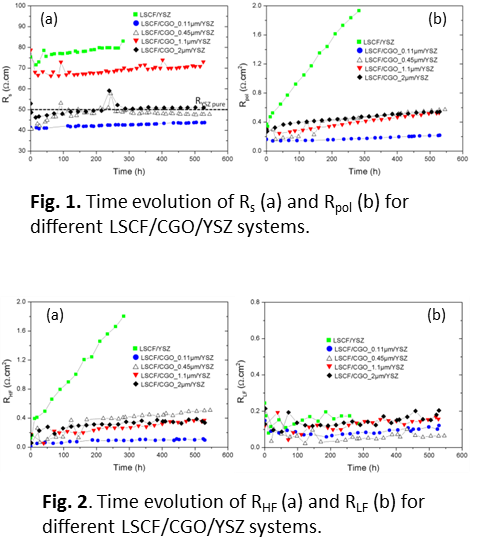