Williford Room B (Hilton Chicago)
C. Marquez, N. Rodriguez, J. M. Montes, R. Ruiz, F. Gamiz, C. Sampedro (University of Granada), and A. Ohata (Utsunomiya University)
Impact Ionization (I.I.) is an inherent phenomenon of very scaled MOSFET devices operated at a high lateral electric field regime (VD=VDD). From the Silicon-On-Insulator prospective, it leads, not only to possible reliability issues arisen from the hot carrier generation, but also to the accumulation of charge in the body of the transistor [1]. This particularity yields a set of effects that depending on the application may be desirable or not; among them: kink effect, body-to-source junction forward biasing or bipolar triggering [3].

The use of body-contacted devices has allowed us the direct monitoring of the Impact Ionization phenomenon in two sets Silicon-On-Insulator transistors: Devices with silicon film thickness TSi=7nm and Buried Oxide Thickness of TBOX=145nm, and devices with TSi=26nm and TBOX=10nm. Both of them fabricated in a 22nm process at CEA-LETI facilities.

Two types of measurements have been conducted by applying different contour conditions to the body-contacted device:

i) Zero-current measurements, have led to determine directly the evolution of the potential of the body (Figure 1), disclosing the conditions were the accumulation of positive charge rises the body potential up the point where the body-to-source junction is triggered.

ii) Zero-potential measurements, draining the impact ionization hole current through the body-contact. This has allowed a precise reconsideration of the commonly accepted models to describe the phenomenon (Figure 2).

From our study, an updated set of constants have been extracted for the calibration of the models [3]. The updated models (Selberherr and Crowell-Sze impact ionization [4]) have been validated comparing experimental data with commercial ATLAS-Silvaco simulations (Figure 3) for devices with different channels lengths and bias conditions.

The outcome of this work provides further insight on the I.I. in thin and ultrathin SOI devices, developing a new protocol for its electrical characterization. The updated models will be essential for the proper description of the phenomenon in TCAD tools. 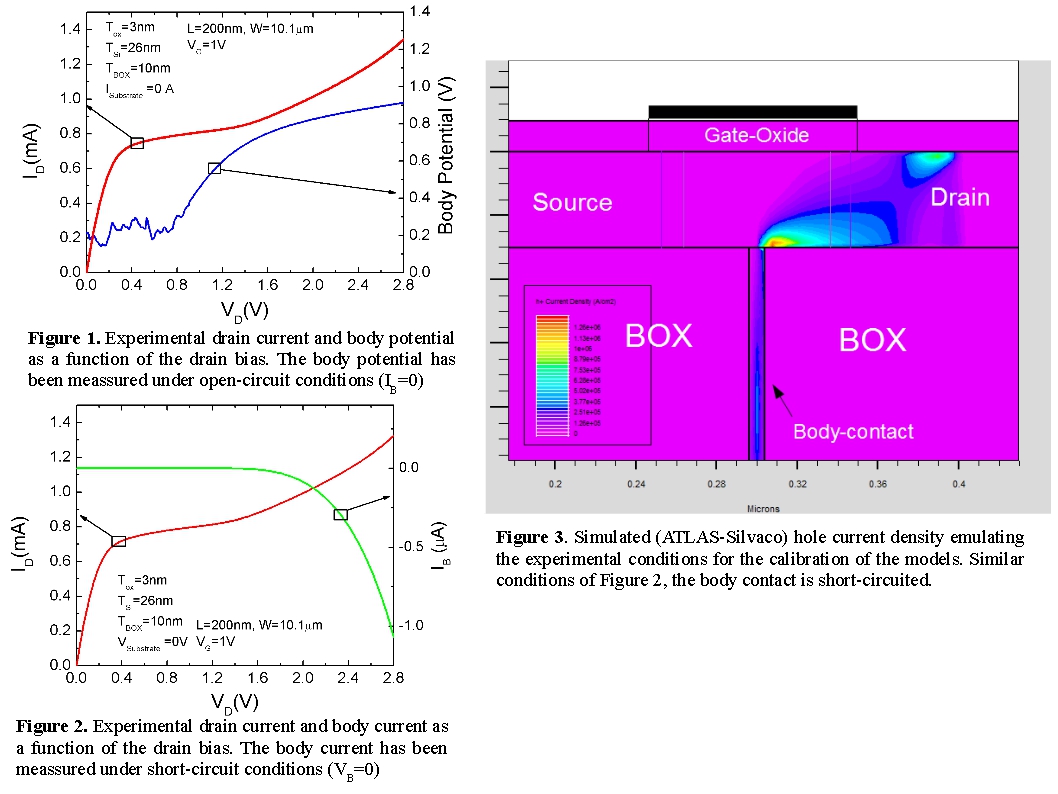