Introduction: The detection of ultra-violet is used in many applications fields [1,2] with operating temperatures of up 500K. The use of SOI PIN Photodiodes is required to provide high quantum efficiency [3]. These devices consist of a highly-doped P and N regions separated by an intrinsic region (with light P-type residual doping) with length LI (Figure 1).  The characterized devices follow the 0.13μm technology from ST described in [6]. They consist of five devices with different intrinsic lengths (LI), but keeping the same total area by changing the numbers of fingers (m), i.e. when LI=1 μm, m=105, when LI= 2μm, m=75, and so on.

Experimental Measurements: In Figure 2 the higher temperature is shown to produce an increase in the ITOTAL (UV illumination with λ=387nm and optical power of 0.57μW) mainly due to the thermal generation of carriers [4]. The variation of VBG modifies the operation mode (accumation, depletion or inversion) of the silicon film [5], the accum. mode is obtained for VBG < -10V, the depletion mode occurs when increasing VBG and the current abruptly raises, and then the inv. mode is achieved for VBG>3V. Since the total current can be approximated by the sum of diffusion and generation (drift) currents [7], if the device is operating at lower temp., the generation will dominate, and then the current will be composed by minority carriers which are the electrons. However, for higher temp., the diffusion current dominates, because of the strong thermal generation of carries. Moreover, the diffusion component is composed of majority carriers, which are the holes. This change in the component that dictates the current has an influence when comparing the ratio between the accum. and inv. currents that can be seen in Figure 3. The devices with shorter LI present the higher variations, showing to be more susceptible than the longer ones. So far, only total current was analysed, however Figure 4 shows the dark current as a function of LI  for T=375K, and it is possible to see that when the mode of operation is accum., IDARK decreases with LI, while in inv., it increases. This fact can be explained as follows: IDARK is proportional to the size of the depletion region of each device. In accum., there is only the presence of a lateral depletion formed between the intrinsic and N+ region, which is not affected by the LI, but rather by the numbers of fingers. Thus, as the LI increases, m decreases, which results in a decreased total depletion region, so, reducing IDARK level. On the other hand, in inv., beyond the lateral depletion, there is also a vertical depletion region, in the second interface, caused by the VBG, which is highly influenced by LI. This means that, by increasing the intrinsic length, there is a raise in the vertical depletion size, thereby enhancing IDARK. Again, the more negative VD, the higher the current level. Although Figure 4 shows the case for temp. of 375 K, similar behaviour was observed for the other temp. The quantum efficiency (QE) as a function of LI is ploted in Figure 5. The QE is defined as the ratio between the photocurrent and the maximum current that would be generated if there was no kind of loss [8]. It presented almost no variation with VBG for T=300K. Besides that, the maximum QE of 33% was achieved for the device with LI=5μm at room temp. However, for T=500K, the efficiency is affected by VBG in a way that for inv. mode, the QE is inversely proportional to LI, while for accum. mode, it is directly proportional to LI (except for LI=100μ), this last one has the same trend as when T=300K. Still for T=500K, a maximum QE of 56.2% was obtained for LI=1μm in inv. mode and 21.7% for LI=10μm in accum.

Conclusions: It was shown that when the device requires operation at higher temp., the best technological choices are the devices with smaller intrinsic lengths in inv. mode of operation because that can achieve 56.2% of  QE. While at room temp., the higher QE was found to be 33% for LI=5μm independently of the mode of operation. 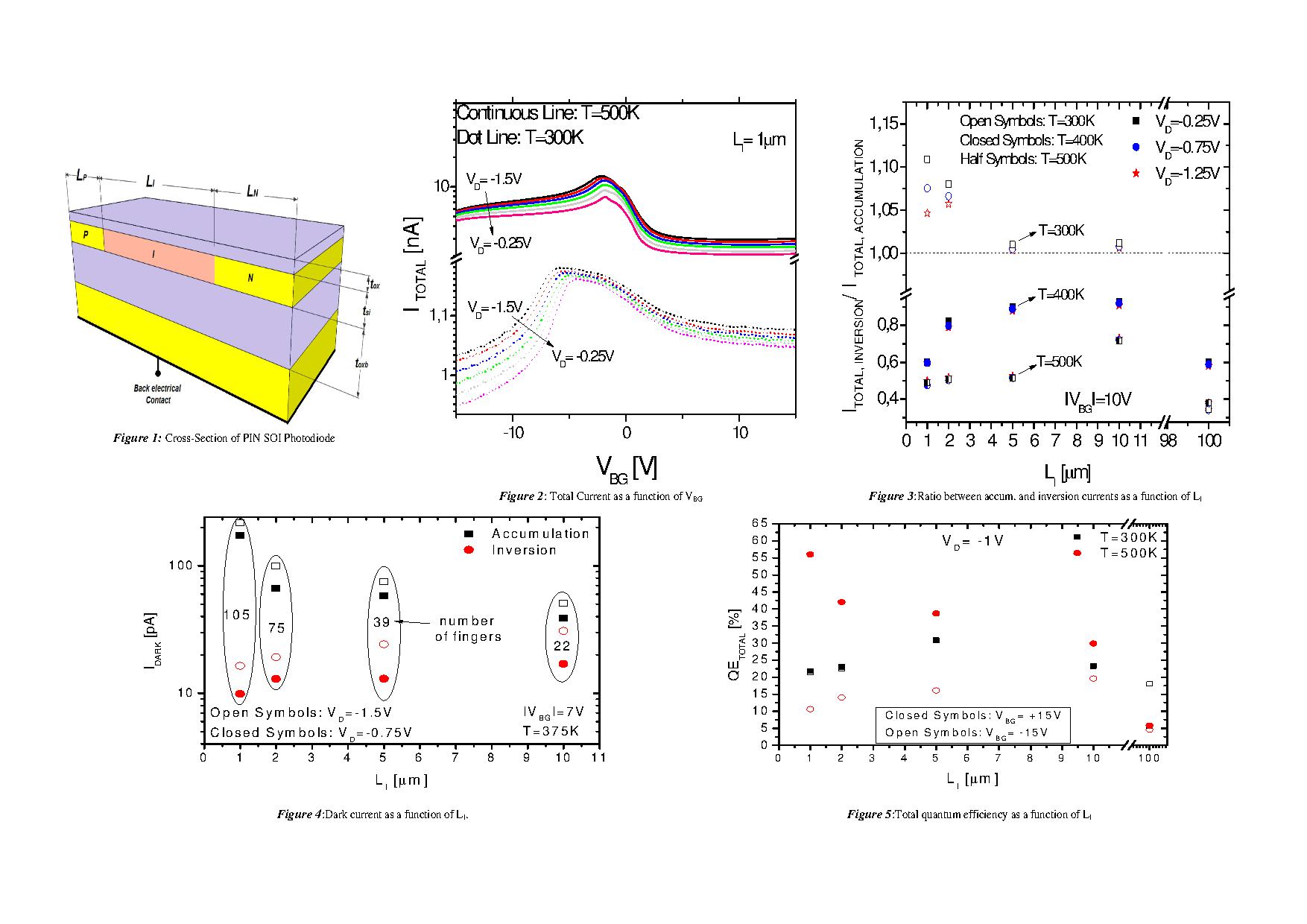