Marquette (Hilton Chicago)
B. Narayanan, A. Kinaci, F. G. Sen, M. J. Davis, S. K. Gray, M. K. Y. Chan, and S. K. R. S. Sankaranarayanan (Argonne National Laboratory)
Gold nano-clusters, owing to their exceptional chemical, optical, and electronic properties, hold promise in a wide range of applications, such as optoelectronics, bio-recognition, and catalysis. Interestingly, Au nano-clusters are known to exhibit a diverse variety of structural configurations including planar, hollow cages, chiral tubes, and bulk-like pyramids or icosahedra. Despite these earlier observations, a fundamental understanding of the atomic structure of Au nano-clusters is still lacking – in particular, dependence of the structure of an Aun cluster on its size n (i.e., number of atoms). For instance, there is an open debate on the critical cluster size nc beyond which globular isomers become energetically preferable over planar ones, with reported values of nc ranging from 7 to 15. Furthermore, the knowledge of structural transitions between energetically close isomers (~20 meV/atom) at a given size is still in its infancy. Global optimization and molecular dynamics (MD) simulations via empirical force fields (EFFs) provide an ideal route to address these issues. However, none of the available EFFs can adequately capture the dimensionality effects from bulk to sub-nanometer clusters. Popular pairwise Au EFFs, such as Morse, or those that account for multi-body effects via an embedding function (e.g., EAM, MEAM) tend to artificially over-stabilize bulk-like isomers. We introduce a new hybrid EFF wherein the short-range Au-Au interactions are described by a bond-order based Tersoff potential while the long-range Au-Au attractions (called aurophillicity) are accounted via a Sutton-Chen like multi-body embedding function. We employed genetic algorithms to parameterize a hybrid EFF of Au by training against cohesive energies of representative clusters and condensed phases of Au computed by density functional theory (DFT) calculations. Our structural searches using this new EFF showed that such a hybrid functional form is capable of describing the diverse range of structures of Au nanoclusters consistent with previous reports, e.g., planar structures circa Au13, hollow cage at Au19, and space-filled structure at Au55. Furthermore, an atom-by-atom formation of Au13via long time MD simulations using our hybrid EFF results in a configuration identical to the global energy minimum structure predicted by DFT. Finally, our new hybrid EFF, which can describe Au very well over sizes from bulk down to sub-nanometer (few-atoms), will open doors to structure prediction of technologically relevant mid-size Au clusters (n=20—80) that are not tractable by DFT alone.

Use of the Center for Nanoscale Materials was supported by the U. S. Department of Energy, Office of Science, Office of Basic Energy Sciences, under Contract No. DE-AC02-06CH11357. 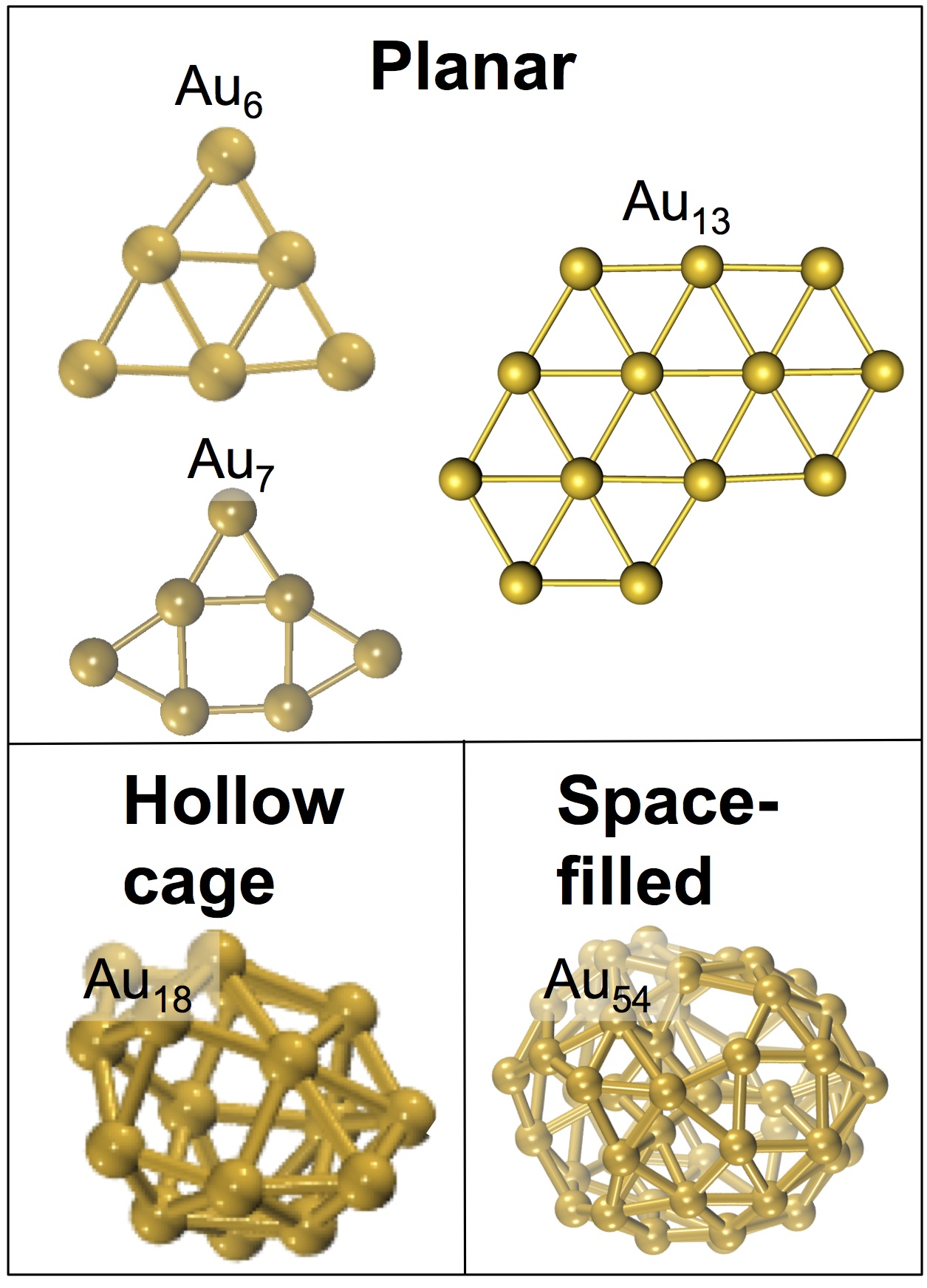