In this context, the development of low flammability and no volatile electrolytes to replace classical liquid electrolytes is then highly popular. One alternative electrolyte was proposed: polymer based electrolytes. Polymer electrolyte composed with PVdF/HFP and Pyrrolidinium bis(fluorosulfonyl)imide (P13FSI) was chosen for their good electrochemical, mechanical and transport properties.

Concerning microbatteries, due to its high theoretical gravimetric capacity of 3579 mAh.g-1 at room temperature, silicon (Si) is a candidate to use in microbatteries. Bulk single crystalline silicon wafers are not suitable for a reliable negative electrode material because of strong volume changes that Si undergo during lithiation and delithiation reactions [1]. Nanostructured Si materials would be stable towards volumetric expansion and would limit crackings and pulverization during cycling, and hence improve the capacity retention [2]. We present an inexpensive and industrially scalable procedure to prepare porous silicon (pSi) based anodes. Meso or macroporous Si is prepared by electrochemical etching of a Si wafer to form a pSi layer, which is then simultaneous peeled-off and transferred onto a metallic current collector. Free standing and flexible films of porous silicon are thus achieved.

Transferring a macroporous silicon layer onto a copper current collector follows these steps : 1) Electrochemical etching of Si wafer to achieve pores (Fig.1a) 2) Copper nanoparticles seeding by electroless deposition (Fig.1b) 3) Electroplating of a copper film 4) Mechanical peeling-off of the pSi/Cu film. SEM observation after peeling shows that the obtained pSi/Cu film surface is homogeneous (Fig.1c) and at higher magnification it is possible to descry the Cu seeding film at the bottom of the pores (inset of Fig.1c). The photograph of the final device (Fig.1d) shows, at a macroscopic scale, the homogeneity of the integrated pSi on the Cu current collector and the flexibility of the pSi/Cu film.

Microbatteries were assembled by hot pressed polymer electrolyte on the pSi/Cu film. After that, lithium foil was put on it and sealed in button cell. 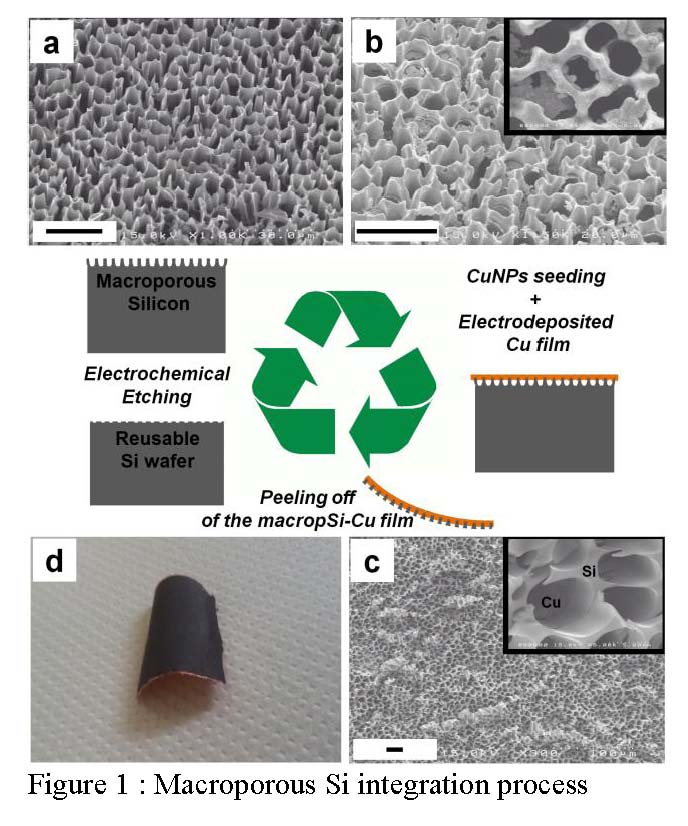