West Hall 1 (Phoenix Convention Center)
J. Yano (Niihama National College of Technology) and A. Kitani (Hiroshima University)
Much effort has been made to prepare better dye-sensitized photoelectrochemical solar cells and enzymatic biofuel cells to convert sunlight and biofuel into electric energy.   Since the last decade, furthermore, hybrids of the solar cells and the enzymatic biofuel cells have also been designed [1].   These hybrid cells possess several advantages over either the solar cells or the biofuel cells operating individually.   When the dye-sensitized semiconductors (photoanodes) are irradiated, they oxidize NADH to produce NAD+.   Using this NAD+, the corresponding enzymes oxidize the biofuels and NADH is reproduced from NAD+ during the oxidation process.   Unfortunately, however, the availability of the sunlight energy in these cells is not high because sunlight is available only on the photoanodes.   In other word, the surface areas of the photoanodes limit the amount of the generated NAD+and the available biofuels.
If the oxidation of NADH took place in the entire electrolytic solution, the biofuels could be oxidized more frequently than in the hybrid cells, and besides, no photoanodes could be required.   As is well-known, direct electrochemical oxidation of NADH requires extremely large overpotential.    Although several organic compounds were employed as current mediators such as catechol, their redox potentials still far apart from the formal redox potential of NADH/NAD+ couple.   In our previous communication [2], however, we have shown that the redox reaction between NADH model compound (1-benzyl-1,4-dihydronicotinamide, BNAH) and riboflavin (RF) was remarkably accelerated by the light irradiation.   Therefore, electrochemical oxidation of NADH is possible at extremely low overpotential (the oxidation potential of reduced flavin) when two different kind of catalysts, flavin and light, are used.   In the present study, we tried to utilize a cell reaction instead of using an external power source.   The cathodic reaction is the reproduction of hydrogen ion in acidic media.   If the photocatalyzed galvanic cell proposed here works well, both electric power and molecular dihydrogen are obtained in the oxidation process of NADH to NAD+.
The anode compartment was a quartz tube equipped with a platinum plate (3 x 2 cm) as the anode.   Dimethylsulfoxide (DMSO) solution containing both BANH and RF was the anolyte and 0.1 M (1 M=1 mol/dm3) tetraethylammonium perchlorate was added as the supporting electrolyte.   The cathodic compartment was a Pyrex glass tube equipped with a platinized platinum plate (0.5 x 2 cm) as the cathode.   The catholyte was 2 M sulfuric acid and both compartments were connected with an agar salt bridge.   A 150 W tungsten lamp was used as a light source and only the anode compartment was irradiated.   The current transient of the galvanic cell was measured under the constant load of 890 Ω.   Measurements were done under nitrogen atmosphere at room temperature.
The characteristics of a galvanic cell were studied with NADH/flavin model system using RF and BANH.   Figure 1 shows the change of cell current with time under the irradiation.   The cell current increases steeply by the irradiation and then decreases gradually to reach a steady value.     The output current-voltage relationships were measured by changing the external load.    Measurements were made after the cell current reached to the steady value.   The open-circuit voltage and the short-circuit current was 0.86 V and 300 µA, respectively.   The maximum power of 80 µW was obtained when the cell voltage was 0.45 V.
The BANH concentration dependence of steady cell currents was examined at 1 hour after irradiation.   Although experimental points were rather scattered, the observed steady currents were fairly constant (134 ± 13 µA) when the concentration of BANH was above 2 mM.   In addition, the relationship between the quantity of electricity passed and the amount of generated BNA+ (oxidized and deprotonated form of BNAH) showed straight line and the line was almost the same as calculated one assuming 100 % current efficiency.   It is obvious that the production of BNA+ from BNAH is quantitative and RF acts as a current mediator.   Thus, highly efficient electrochemical conversion of BNAH to BNA+is possible with obtaining both electricity and dihydrogen as by-products.   NADH behaves in a similar manner as BNAH does. 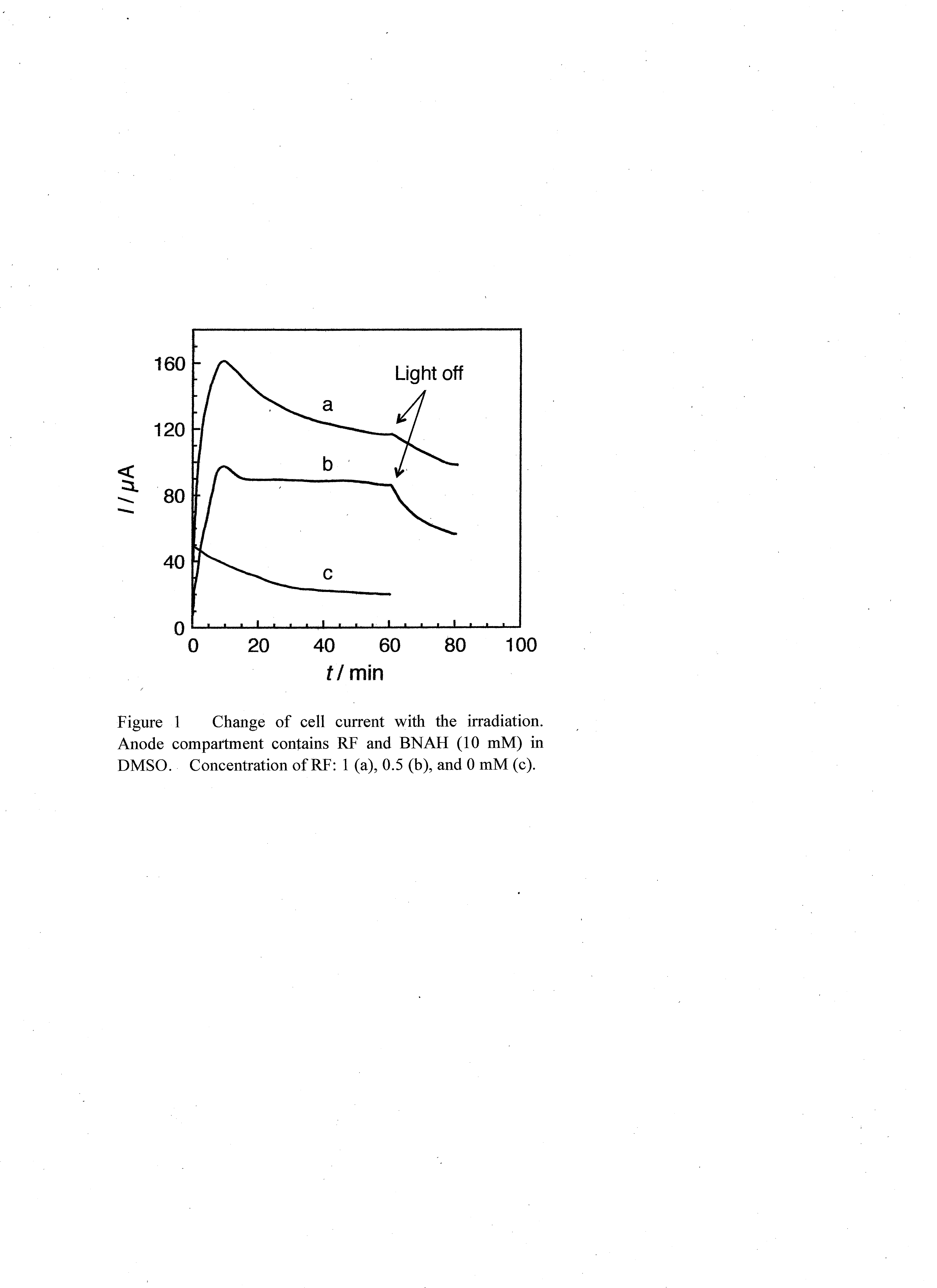