For an increasing demand of energy density in lithium-ion batteries, there is room for further research into composite electrode fabrication [1]. Although a simple way to enhance the energy density per volume is to increase the amount of active materials in the electrode, this way ends up an intense drop of electrochemical capacity, called “package-limitation” in this study. For understanding of this mechanism, we have developed energy-scanning confocal X-ray diffraction (ES-XRD) analysis having high time and spatial resolution, and succeeded in direct observation of the delay of the Li+ supply in the electrode with using a model electrode [2]. In this study, we discussed how the Li+concentration in the pores affects the package-limitation based on spatially-inhomogeneous electrochemical reaction reveled by ES-XRD.

LiNi1/3Co1/3Mn1/3O2 (NCM), acetylene black and polyvinylidene fluoride were mixed in a gram ratio of 90:5:5, and then was casted onto an aluminum foil as a current collector, yielding finally two kinds of 100 µm-thick electrode having the density of 2.96 and 3.36 g cm-3. Aluminum pouch-type three-electrode cells consisting of the composite electrode as a working-electrode and lithium foils as a counter and reference electrodes were fabricated. LiPF6 in a 3:7 (by volume ratio) mixture of ethylene carbonate and ethyl methyl carbonate solution was used as the electrolyte of which the concentration was 0.3, 1 or 2 M.

The in-situ ES-XRD measurements [2] were performed on the BL28XU of SPring-8 (Hyogo, Japan). The incident and diffracted beams collimated by pairs of slits formed lozenge-shape probe having resolution of 30 µm (vertical) and 243 µm (horizontal). We set four measurement positions in the cross-section of the composite electrode, namely the center of each position being at the distance of 10, 35, 65 and 90 µm from the electrode surface. All cells were initially pre-charged to Li0.5Ni1/3Co1/3Mn1/3O2, and were discharged to 2.0 V during the ES-XRD measurements.

Electrochemical reaction in the 2.96 g cm-3 electrode using the 1 M electrolyte progressed homogeneously at 1C rate or less. With increasing the electrode density to 3.36 g cm-3, inhomogeneous electrochemical reaction owing to the poor communication of the Li+in the current collector side, i.e., the deepest position, occurred at 1C operation, resulting in the discharge capacity drop.

This work was supported by the “Research and Development Initiative for Science Innovation of New Generation Battery (Rising project)” of the New Energy and Industrial Technology Development Organization (NEDO), Japan. 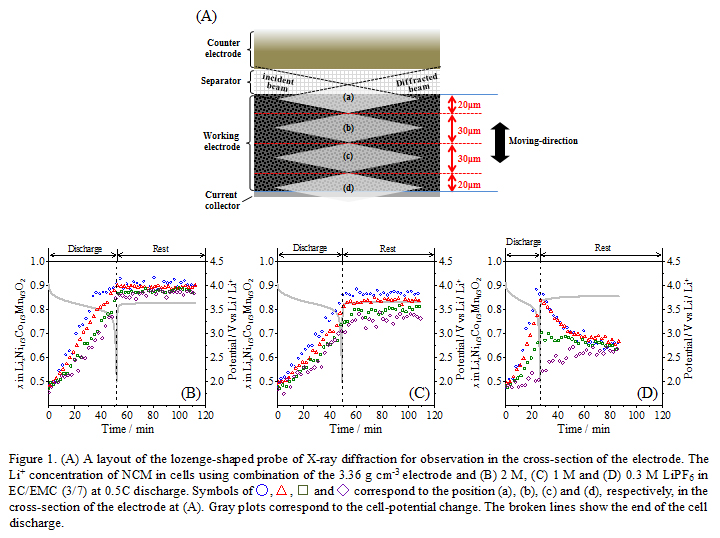