Commercially available lithium-ion batteries comprised of LiCoO2 as the cathode and graphite as the anode. Graphite is being considered for use as the anode material for lithium-ion batteries for several reasons, such as the fact that the Li+ ions can easily intercalate/de-intercalate into/from the graphite structure, low irreversible capacity at the first cycle, a flat and low potential profile, a long cycle life, abundant and relatively low cost. However, in spite of its advantages, graphite has several drawbacks, such as its low energy density, low theoretical capacity (372 mAh g-1), easy exfoliation and safety issues related to lithium deposition. These drawbacks limit its application to electric vehicles, hybrid electric vehicles and plug-in hybrid electric vehicles. Therefore, searching for new electrode materials which can act as an alternative to graphite with a high specific capacity and excellent electrical conductivity is an urgent task in building the next-generation high-power lithium-ion batteries, in order to fulfill the ever-growing demand in various consumer electronic devices. Recently, ZnMn2O4 has been considered as one of the most attractive compounds, because of the low oxidation (delithiation) potential of zinc and manganese nanoparticles: 1.2 V and 1.5 V, respectively, which ultimately increase the battery output voltage compared to that provided by simple binary metal oxides. Furthermore, zinc and manganese are abundant, environmentally friendly, and relatively inexpensive compared to nickel and cobalt. Interestingly, ZnMn2O4 can store Li+ions through both conversion and alloying reactions, because Zn, one of the products of the conversion reaction. However, as in the case of other anodes, the poor electric conductivity and large volume change of the ZnMn2O4 nanostructures during the electrochemical reaction lead to a fast capacity decrease. However, a few attempts have been made to overcome the aforementioned drawbacks of ZnMn2O4 by focusing on controlling the morphology accompanied with synthesis of nano-sized particles and graphene based nanocomposites using expensive and tedious methods. Nanostructured materials have become a subject of great interest in a variety of mechanical, electrical and optical applications, due to their unique physico-chemical properties.

Therefore we are synthesized ZnMn2O4/C nanoparticles by one step polyol assisted pyro-synthesis for use as the anode in rechargeable lithium ion batteries without any post heat treatment. The as-prepared ZnMn2O4/C is tetragonal with a spherical particle size in the range of 10–30 nm. Electrochemical measurements were performed using the as-prepared powders as the active material for a lithium-ion cell. The nanoparticle electrode delivered an initial charge capacity of 666.1 mAh g1 and exhibited a capacity retention of 81% (539.4 mAh g-1) after 50 cycles. The capacity enhancement in the as-prepared ZnMn2O4/C may be explained on the basis of the polyol medium that enables to develop a sufficient carbon network that can act as electrical conduits during electrochemical reactions. The carbon network appears to enhance the particle-connectivity and hence improve the electronic conductivities. 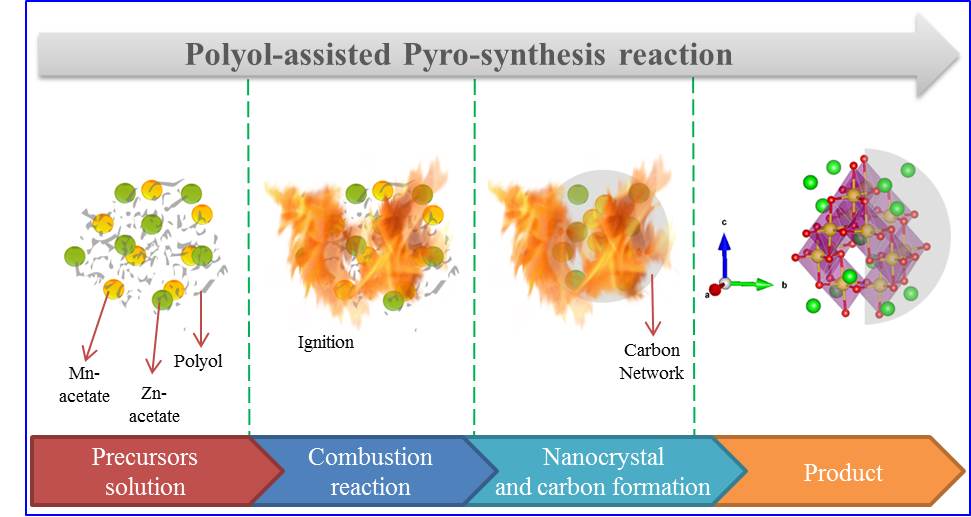