102-A (Phoenix Convention Center)
A. Chiba (National Institute for Materials Science (NIMS)), S. Shibukawa (Institute for Materials Research, Tohoku University), I. Muto (Department of Materials Science, Tohoku University), T. Doi (Nippon Steel & Sumitomo Metal Corporation), K. Kawano (Nippon Steel & Sumitomo Metal Corporation), Y. Sugawara (Department of Materials Science, Tohoku University), and N. Hara (Department of Materials Science, Tohoku University)
Stainless steels suffer from pitting corrosion in chloride-containing environments. Sulfide inclusions, such as MnS, are known to act as the initiation sites of pitting on stainless steels. In our previous works, we studied the pit initiation behavior at the MnS inclusions in stainless steels. The pit initiation mechanism was found to be as follows: 1) the dissolution of the MnS inclusions in chloride-containing solutions leads to the deposition of elemental sulfur on and around the inclusions; 2) the synergistic effect of the elemental sulfur and chloride ions causes the dissolution of the steel matrix at the MnS/steel boundaries, resulting in the formation of trenches; 3) the hydrolysis reaction of Cr3+ released from the steel matrix dissolution decreases the pH in the trenches, and at the same time, the electrode potential at the bottom of the trenches decreases due to the IR-drop. Finally, the pit initiation is defined as the local transition from the passive to active state at the bottom of the trenches. It would appear that inhibiting the dissolution of the steel side at the MnS/steel boundaries improves the pitting corrosion resistance of stainless steels in chloride-containing environments. In recent years, it has been reported that low-temperature carburizing treatments which result in interstitial carbon content of more than 10 at% with no precipitation of carbides improve the corrosion resistance of stainless steels; however, the mechanism is not well understood. In addressing the improvement of the pitting corrosion resistance of stainless steels, it is necessary to understand the mechanism of the effect of low-temperature carburizing treatments on the pit initiation at the MnS inclusions in stainless steels. 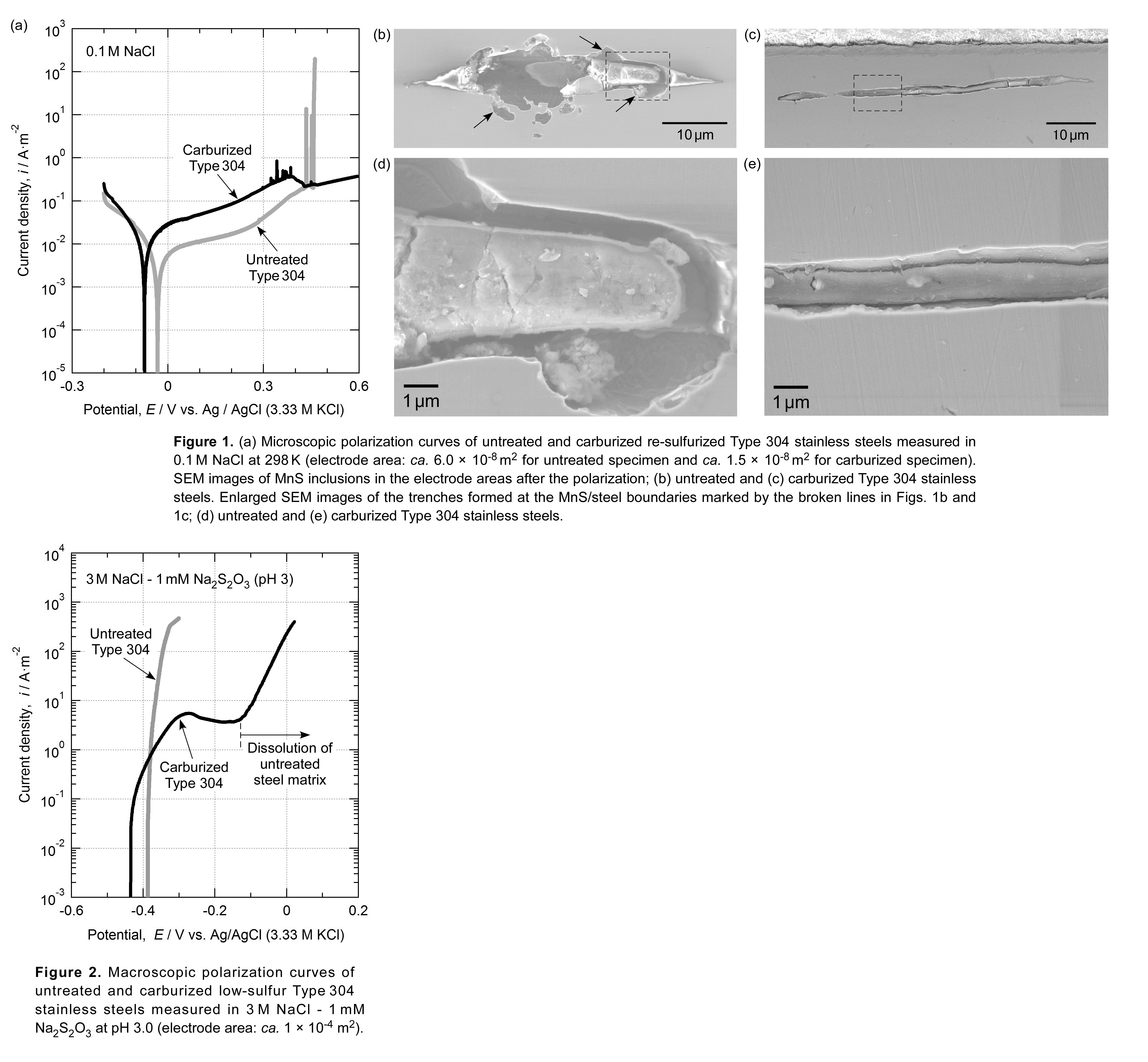