Hydrogen isotopes are important elements for nuclear and fusion reactors. The technique of hydrogen isotope separation has been investigated in several approaches [1-3]. However, the most methods are ineffective processes and shows low separation factor. That is, a large scale plant is generally necessary to deal with enormous water for the isotope enrichment. In Japan, a novel separation technology of tritium in Fukushima Daiichi nuclear power plant is urgently required.

The kinetic study was conducted by the rotating electrode with the rotation rate of 900, 1600, 2500 and 3600 rpm. The working electrode was a 0.785 cm-2 polycrystalline Pt disk and the counter electrode was coiled Pt wire. The reference electrode was Hg/Hg2SO4 saturated with K2SO4. The polarization curves were recorded by linear sweep voltammetry at the scan rate of ±0.01 V s-1. The electrolytes of 0.05 M D2SO4and 0.05 M KOD were maintained at 298 K.

Figure 2 shows Tafel plots of mass transfer corrected currents for the hydrogen oxidation reaction (HOR) and deuterium oxidation reaction (DOR) at low anodic overpotential (η ≤ 0.08 V). The Tafel region of HOR began to be observed at η ≈ 0.04 V. The slope value of HOR was 0.091 V dec-1, which was larger than that of DOR (0.055 V dec-1). Concerning on the exchange current density, the ratio of i0(H2) / i0(D2)was 0.46. The present kinetic comparison of deuterium with protium data supported the isotope effect by which the deuterium was more easily dissociated on platinum electrode, pointing out a new separation by fuel cells.

We will calculate the total energy consumption in fuel cell and water electrolysis and discuss the possibility of new separation system for heavy water production.

The authors appreciate the financial aid given by the Ministry of Education, Culture, Sports, Science and Technology (Project NO. 26870234). One of the authors, H. Matsushima, wishes to express his sincere gratitude to Inamori Foundation in Japan. 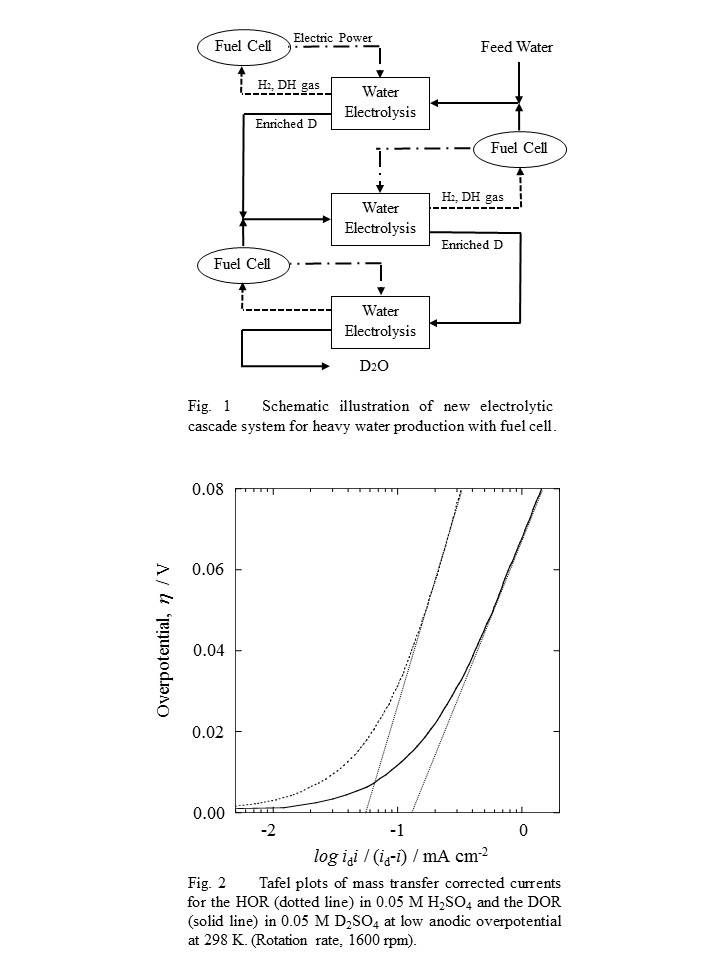