911
Light Assisted Electrodeposition for the Metallization of Silicon Solar Cells

Russell B (Hyatt Regency)
Q. Huang, S. Papa Rao (IBM TJ Watson Research Center), and K. Fisher (IBM TJ Watson Research Center)
Cu electroplating is of a great deal of interest for the metallization of silicon solar cells due to its comparable resistance with the current silver metallizaion, and its lower cost for both the material and the operation.[1,2] However, the notorious Cu diffusion into Si is of great concern to the devices performance degradation during the life cycle of the cells. Ni silicide and Ni metal layers have been recently reported as part of the integration scheme to enable the Cu metallizaion and greatly improved the solar cell reliability.[3,4] The formation of this Ni silicide and Ni stack structure is to provide a low-resistance contact between the silicon and metal grid, a good adhesion of metal grid, and a diffusion barrier for the Cu. Among them, the Ni silicide formation needs to be well controlled so that it is not too thick to shunt the solar cell.

This paper will present the light assisted plating of Ni and the silicide formation on single crystalline silicon solar cells fabricated with CMOS p-Si on a semiconductor line. The solar cell substrates for plating comprise ~ 60 ohm/sq emitter formed by POCl diffusion, PECVD SiN passivation layer, and evaporated Al back surface field. Electrodeposition of Ni was studied on 4 cm x 4 cm solar cells in different solutions containing Ni salt and other plating additives. Back contact through the Al BSF was used and front-side illumination was applied. Silicidation was achieved by rapid thermal annealing at different temperatures for different time. The study is focused on the effect of light, chemistry and the plating current on the film in terms of morphology, impurity and its salicidation. 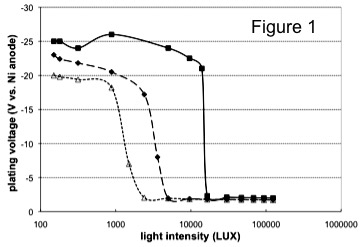