Russell B (Hyatt Regency)
S. Sun (Northeastern University) and E. J. Podlaha (Northeastern University)
Intensity modulated photocurrent spectroscopy (IMPS) is a technique conventionally used to characterize the semiconductor/electrolyte interface.  It is used here in a new way, to track the presence of adsorbed, photoactive intermediates during the electrodeposition process, using Ni-W alloy electrodeposition as an example. Interest in Ni-W alloys are related to their high corrosion resistance, ability to catalyze the hydrogen evolution reaction from water, and superior wear resistance. The Ni-W deposition behavior from aqueous solutions is described as a coupled reaction mechanism and better understanding of the mechanism can help to control the deposit composition, which in turn is related to the resulting properties. To this end, IMPS was used to examine codeposition using an ammonia free citrate-boric acid electrolyte. The IMPS spectra was generated for different applied potentials. A significant current response to the incident modulated UV light was detected where steady state Ni-W codeposition takes place. The results confirm the presence of photoactive intermediates during codeposition, and demonstrates the first use of this technique in the electrodeposition process of a metallic alloy.

The attached figure shows a typical response during cathodic deposition of a Ni-W alloy at -1 V vs AglAgCl  (42 wt % W) during IMPS compared to a potential where open circuit conditions are achieved and when clearly the alloy is treated anodically. A three electrode, single compartment cell with a flat quartz window was used with the following electrolyte: 0.375 M sodium citrate, 1.0 M boric acid, 0.075 M sodium tungstate, and 0.1 M nickel sulfate at a pH of 7. The response during deposition is significantly larger than that which occurs when a surface oxide is purposely generated; helping to valid that the deposition intermediate contributes to the observed impedance results. A simple model that includes the generated photocurrent contributing to an electrochemical reaction at the electrode/electrolyte interface or being lost to recombination was used to interpret the IMPS results. The dominate process occurring during IMPS is electron-hole pair recombination and thus, the modulated light does not significantly change the deposit composition, which was experimentally confirmed.

This material is based upon work supported by the U.S. National Science Foundation under Grant No. 0957448. 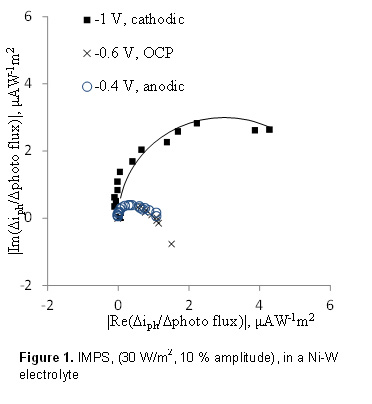