Russell B (Hyatt Regency)
C. Reale Hernandez (INRS-EMT), Z. Karkar (CNRS-IMN; INRS-EMT), D. Guyomard (CNRS-IMN), B. Lestriez (CNRS-IMN), and L. Roué (INRS-EMT)
For several years, great attention has been paid to silicon as negative electrode material for Li-ion batteries, due to its very high gravimetric capacity (3579 mAh g-1) in comparison to that of graphite (372 mAh g-1). However, Si electrodes suffer from poor cyclability due to the large volumetric expansion (up to 300%) of Si upon its lithiation, resulting in the electrode architecture disintegration, and in the instability of the solid electrolyte interphase (SEI).

We have recently shown that low-cost and high-performance Si-based electrodes can be obtained by combining (i) the use of ball-milled (nanocrystalline) Si powder resulting in a smoother phase transition; (ii) the processing of the electrode at pH 3 with carboxymethylcellulose (CMC) binder favoring the covalent grafting of the CMC to the Si particles; (iii) the use of fluoroethylene and vinylene carbonates (FEC/VC) electrolyte additives resulting in a more stable SEI.1

In the present study, it is shown for the first time that the storage conditions of the Si-based film before assembling in the electrochemical cell has also a major impact on the electrode performance. This is illustrated in Fig. 1 which compares the evolution of the discharge capacities with cycling* of ball-milled Si-based electrodes prepared after storage at room temperature of the composite film** (a) for 1 day and 55 days in air and (b) for 6 days in air (10-15% relative humidity) and in humid air (70% relative humidity). It clearly appears that the film storage in air has a very positive impact on the electrode cycle life, which is accentuated under humid atmosphere. A possible explanation is that during the film storage, water molecules from air react with the film and modify the chemical links between the Si particles and the CMC binder. This tends to be confirmed by attenuated total reflectance Fourier transform infrared spectroscopy (ATR-FTIR) analysis of the composite electrodes***. Indeed, as shown in Fig. 2, a significant increase of the peak centered at 1630 cm−1 assigned to the stretching band of the carboxyl group of CMC is observed for the film stored in humid air, while the peak centered at 1750 cm-1assigned to a covalent bond between Si and CMC is decreased. This suggests an increase of the hydrogen bonds between the Si particles and CMC binder (Fig. 3), which could increase the deformability of the electrode, favorable to its mechanical stability with cycling.  We believe that an optimum covalent / hydrogen bond ratio is required to obtain a film sufficiently rigid to maintain electronic connections but flexible enough to vary in volume without breaking/peeling off during cycling.

* Electrodes were cycled in Swagelok-type cells with Li as counter/ref. electrode at full capacity between 1 and 0.005 V at a current density of 480 mA g-1 of Si. The electrolyte was LP30 + 10wt%FEC.

*** Electrodes were dried at 100°C under vacuum prior to ATR-FTIR analysis (same procedure as prior electrode cycling). 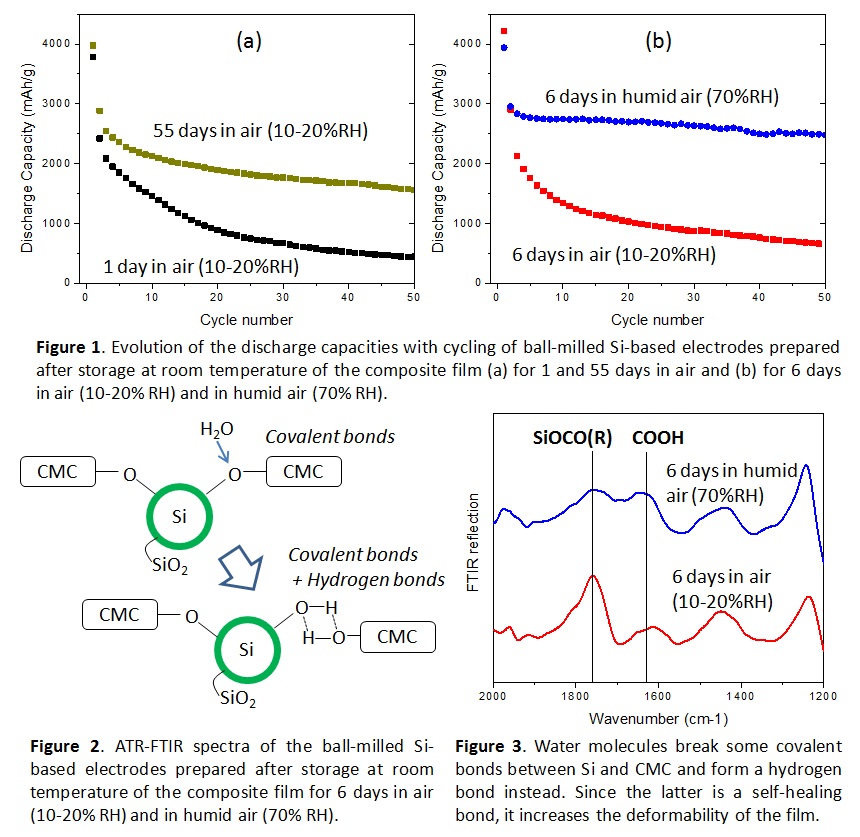