698
The Effect of the Flow-Regime, Reversal of Polarization, and Oxygen on the Long Term Stability in Capacitive De-IonizationĀProcesses

102-A (Phoenix Convention Center)
I. Cohen, E. Avraham, Y. Bouhadana, A. Soffer (Bar-Ilan University), and D. Aurbach (Bar-Ilan University)
The demand for potable water is continuously increasing. Therefore energy-efficient water desalination methods are the focus of intensive research1–3. Capacitive deionization (CDI) is an energy-efficient water desalination technology. The presentation will address the problematic corrosion which develops in CDI cells during periodic water desalination processes.4–8 Cells comprising identical pairs of activated carbon electrodes, which are initially symmetric, lose their symmetry upon cycling as illustrated in figure 14,6. The positive electrodes are gradually oxidized and their pore systems are damaged. In order to understand corrosion processes of the positive electrodes in CDI cells and to learn how to avoid it, our research focused on electrodes oxidation in CDI cells in three different aspects4.

The first one is the effect of the geometry of the cells and the flow regimes. We compared CDI cells that were operated in flow-through and flow-by modes. We were able to conclude that the geometry has an impact on the electro-oxidation of the positively polarized electrodes. Flow-by cells were found to be more stable than flow-through cells. It is explained by a local basic environment developed at the negative electrodes which affects badly the stability of the positively polarized electrodes. Such an inter-electrodes impact is relevant only to flow-through cells.

The second aspect that was examined was operation by alternating application of potential on flow-through CDI cells: the electrodes were polarized periodically to negative and positive potentials.  It was clearly demonstrated that such a mode of operation pronouncedly extends the stability of the electrodes by mitigating their oxidation due to the positive polarization.

Finally, to better understand the effect of the dissolved oxygen in the solution on the electrodes’ oxidation, we operated flow-through CDI cells under nitrogen atmosphere. Operation under nitrogen did not avoid oxidation of the positive electrodes, when 0.9V were applied to the cells. However, the stability of the cells were extended by three fold, compared to operation under air. It is clear from these experiments that dissolved oxygen has a very detrimental effect on the stability of CDI cells, because trace oxygen reduction at the negative electrodes leads to asymmetric potential application, in which most of the potential applied falls on the positive electrodes. Hence, their oxidation is accelerated. In any event, it is impossible to avoid the presence of trace oxygen in a practical CDI operation.

Based on the results that will be presented, it is clear that alternating potential application, using flow-by mode, further optimization of the potential applied and electrodes modifications that will make them more resistive to oxidation, can help to extend remarkably the stability of CDI cells in desalination processes and promote their practical use.

Fig. 1. (A) Illustration of the operational parameters: potential applied, potential dependent concentration of adsorbed and desorbed ions (counter-ions and co-ions), of initially symmetric CDI cells. The electrodes are polarized upon charging (desalination step) and are shorted to 0 V upon discharge (extraction of waste, salty solution). (B) The situation when the inversion point is reached: illustration of the unsymmetrical situation developed with CDI cells, which positive electrodes are oxidized and their Point of Zero Charge (PZC) is sifted to positive potentials (compared to that of pristine electrodes). (C) Illustration of the operation of unsymmetrical CDI cells, which positive electrodes are oxidized and have high resistivity and low surface area because of detrimental oxidation processes. The electrodes’ PZC and the potential of cell shorting, E0, vs. a virtual reference electrode, are marked. 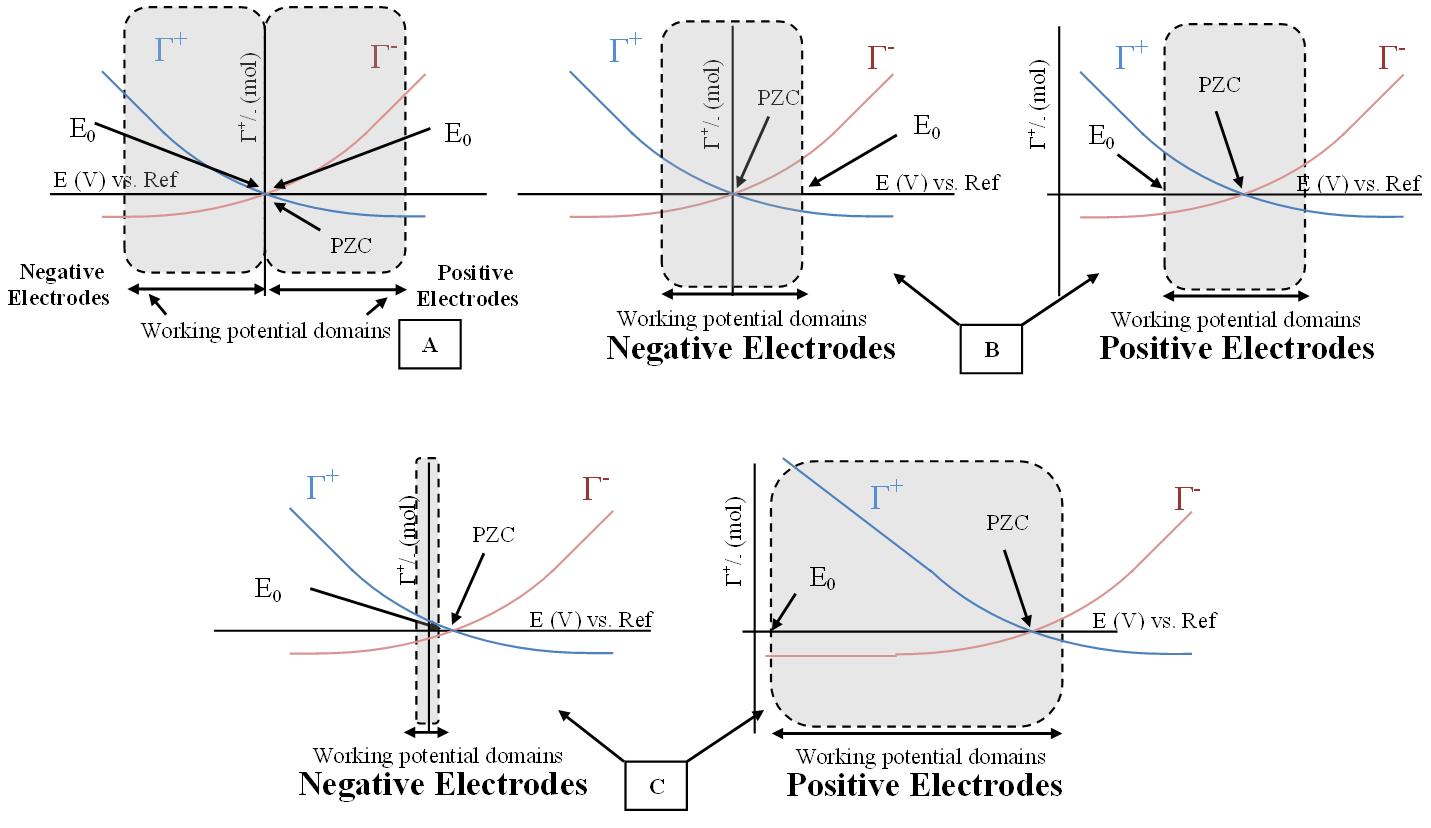