699
The Dezincification of Brass: In Situ Measurement of Zn and Cu Dissolution with Atomic Emission Spectroelectrochemistry

102-A (Phoenix Convention Center)
K. Ogle (Insitut de Recherche de Chimie-Paris) and P. Zhou (Insitut de Recherche de Chimie-Paris)
The dezincification of brass is a well-known form of degradation occurring during the exposure of brass to an aqueous electrolyte. The characterization of brass dissolution through conventional electrochemical techniques is however difficult due to the incongruent dissolution of Cu & Zn. To circumvent this problem, we are using the atomic emission spectroelectrochemistry (AESEC) technique to measure the instantaneous rates of Cu & Zn dissolution as a function of time at open circuit or under conditions of applied current or potential.

In this work, we investigate brass dezincification in a synthetic tap water solution. The dissolution rates of Cu and Zn were measured at open circuit and under an applied anodic current (5 to 80 µA). The selective dissolution of Zn was observed under all conditions, although the Cu/Zn ratio of dissolving species increased with increasing anodic current. The residual copper film consisted of both metallic copper and insoluble Cu(I) species. The quantity of insoluble Cu(I) species were determined quantitatively by dissolution in a pH = 5.0 citrate buffer. The mass balance between dissolved Cu and Zn, residual oxidized Cu, and the total electrical charge permits a determination of the residual metallic copper film. Finally, we have investigated the dissolution reactions using AESEC coupled to electrochemical impedance spectroscopy (EIS). This allows us to decompose the overall impedance into elementary Cu and Zn components. The two components behave differently based upon their relative solubility and dissolution mechanism for a specific experiment. This series of AESEC / EIS experiments allows us to characterize the overall mechanism of dezincification in considerable quantitative detail.

A typical example of an galvanostatic AESEC experiment is shown in the Figure below. Here a brass sample (57.5% Cu, 42.0 % Zn (% by mass)) was exposed to a synthetic “tap water” solution (32 mg/l MgSO4·7H2O, 103 mg/l MgSO4·7H2O, 275 mg/l Na2SO4 and 36 mg/l NaHCO3). During the first exposure period, the open circuit, spontaneous corrosion rate was measured at 0.1 nmol s-1 of Zn dissolution with the Cu dissolution rate below the detection limit. During the second period, a 80 µA galvanostatic current was applied to the sample. The Zn and Cu dissolution rates increased substantially however incongruent dissolution was always observed. Following a return to the open circuit potential, the dissolution of residual oxidized Cu, along with small amounts of Zn, was measured by dissolution in a citrate buffer. Assuming that Cu and Zn dissolve as the +2 cation in the tapwater solution and that Cu dissolves as Cu(I) in the citrate solution, comparison of the total dissolved species to electrical charge, gives a 98% yield.

The methodology shown here was applied to several Cu-Zn alloys over a range of electrolyte and potential / current parameters to give insight into the mechanism of brass dezincification. 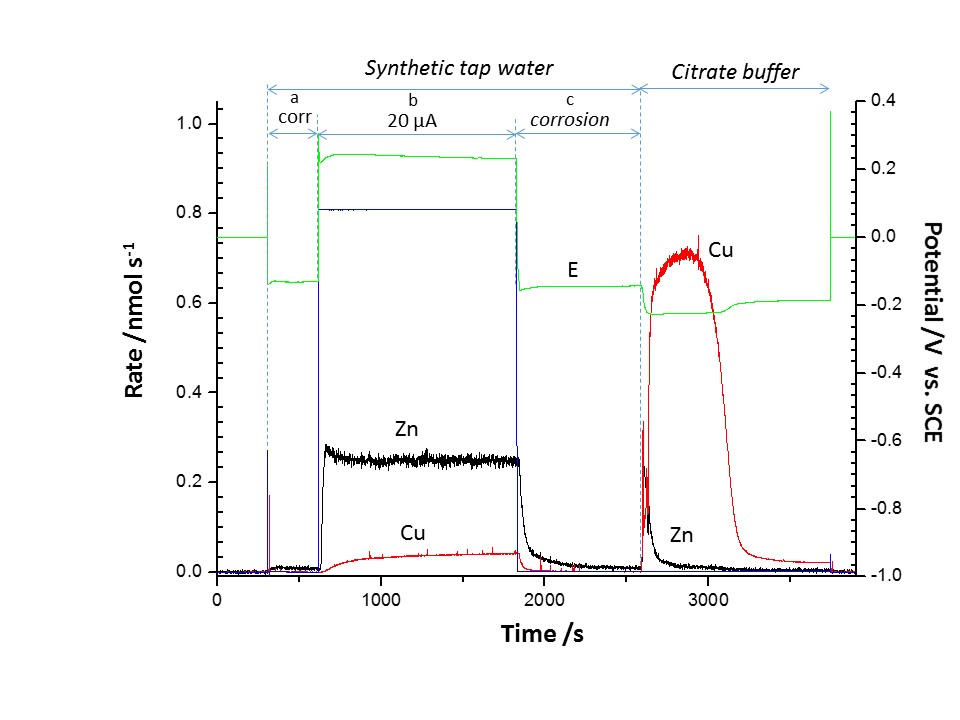