Russell A (Hyatt Regency)
S. Brankovic, E. Bulut (University of Houston), W. Dongjun (University of Houston), and H. Kilic (Marmara University)
The deposition protocol based on Surface Limited Redox Replacement (SLRR) reaction of UPD monolayers [[i]] has gained a lot of attention in recent years [[ii]-,[iii],[iv],[v],[vi],[vii],[viii],[ix]]. The monolayers as well as thin films of arbitrary thickness can be deposited with great fidelity using this approach [9,[x]]. Their nucleation and morphology is found to be a direct function reaction kinetics of SLRR [[xi]]. Understanding of the interplay between the experimental conditions during SLRR on one side and resulting SLRR reaction kinetics on the other is necessary if the true control of the deposit morphology is to be assumed using this deposition protocol.

Our work explores a fundamental relation between kinetics of Au deposition via SLRR of Pb UPD ML and experimental parameters of the SLRR process such as concentration of the UPD metal and depositing metal ions in the solution, effect of complexing agents and ions such as citrate, effect of temperature and effect of supporting electrolyte. The reaction solution in our kinetics studies contained both Pb2+ and Au3+ ions in 0.1 M HClO4 as a supporting electrolyte. The Pb coverage as a function of time during SLRR is calculated form the temporal change of the surface reflectivity.

The typical results for Pb UPD ML coverage change during Au deposition via SLRR of Pb UPD ML obtained from reflectivity data are shown in Figure 1. Data such as one in Figure 1 are fitted with the model-rate equation of first order in terms of Pb UPD coverage which also takes into account the contribution of parallel SLRR of Pb UPD due to oxygen reduction reaction (ORR). This allowed a more realistic and more reproducible values of the rate constant, k’, for Au deposition process to be obtained. Our results suggest a linear relation between the rate constant k’ and Au3+ concentration.  The increase in Pb2+ ion concentration for one order of magnitude increases the value of the fundamental rate constant for Au deposition via SLRR of Pb UPD ML for almost 100%. The presence of citrate ions in the solution lowers the value of rate constant but not significantly. The presented data show that effective manipulation of deposition kinetics can be achieved by proper choice of UPD and depositing metal ions concentration. This should have a strong implication when deposit morphology control is considered. 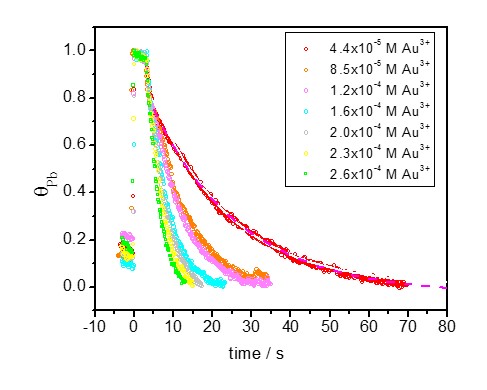