West Hall 1 (Phoenix Convention Center)
K. Tokutake (National Research Institute of Fire and Disaster), H. Nishi (National Research Institute of Fire and Disaster), D. Ito (Faculty of Engineering, Yokohama National University), S. Okazaki (EST committee,High Pressure Institute of Japan), and Y. Serizawa (Japan Oil, Gas and Metals National Corporation)
The internal bottom plates of oil storage tanks are exposed to a corrosive neutral electrolyte solution containing chloride ions and oxygen that are enough to cause severe corrosion. For this reason, the steel plates are generally coated with a heavy-duty coating aims to isolate the steel substrate from the corrosive electrolyte. Since the coating has exceptional durability, the visual defects of the coatings in many oil storage tanks are almost undetected in spite of a long period of use (i.e. over twenty years). On the other hands, it is supposed that the barrier properties of the coatings decrease due to the electrolyte solution uptake. For appropriately maintaining the coatings, an evaluation method for the visually non-defective coatings are required.

According to Van Westing et al. [3], the impedance characteristics of a high performance anti-corrosion organic coating are interpreted by CPE (constant-phase element). Therefore, it is suggested that the CPE is a useful circuit element to evaluate the impedance of the coatings on the internal bottom plates of oil storage tanks. However, there is possibility that the analysis of an impedance spectrum by using the CPE causes the ambiguity of the physical interpretation in an experimental object. Thus, it is necessary to evaluate the anti-corrosion performance of the coating considering the cause of the CPE behavior in the impedance spectrum.

In this study, the anti-corrosion performance of the coating applied to an actual oil storage tank is evaluated by using impedance measurements. The CPE behavior of the coating is explained based on the distribution of the coating resistivity along the thickness.

The field impedance data was obtained by the two-electrode impedance measurement setup, as shown in Figure 1. The impedance spectra were obtained over a frequency range from 200 Hz to 10,000 Hz with a 1 Vp-psinusoidal potential.

Figure 2 shows the representative impedance spectrum in the obtained data. The fitted curve analyzed with the electrical equivalent circuit consisting of a parallel combination of the CPE and the resistance Rpcorresponding to conductive pathways [1] are noted in the figure as dotted lines. The fitted curve was in good agreement with the field data, as can be seen Figure 2. Thus, the impedance spectrum can be interpreted by using the CPE.

In subsequent discussions, this CPE behavior is explained by the distribution of the coating resistivity according to a power-law along the thickness, which results from an electrolyte solution permeation in the coating [4][5]. The obtained results in this study will contribute the establishment of an evaluation method for heavy-duty coatings.

Acknowledgement: This research was performed with financial support from Japan Oil, Gas and Metals National Corporation.

[2] J. Kittel, N. Celati, M. Keddam, H. Takenouti, Influence of the coating-substrate interactions on the corrosion protection: characterization by impedance spectroscopy of the inner and outer parts of a coating, Prog. Org. Coat. 46 (2003) 135.

Figure 2 Typical impedance plots obtained for the coating on the internal bottom plate of the oil storage tank in the corrosive electrolyte: (a) Nyquist  and (b) Bode plots. 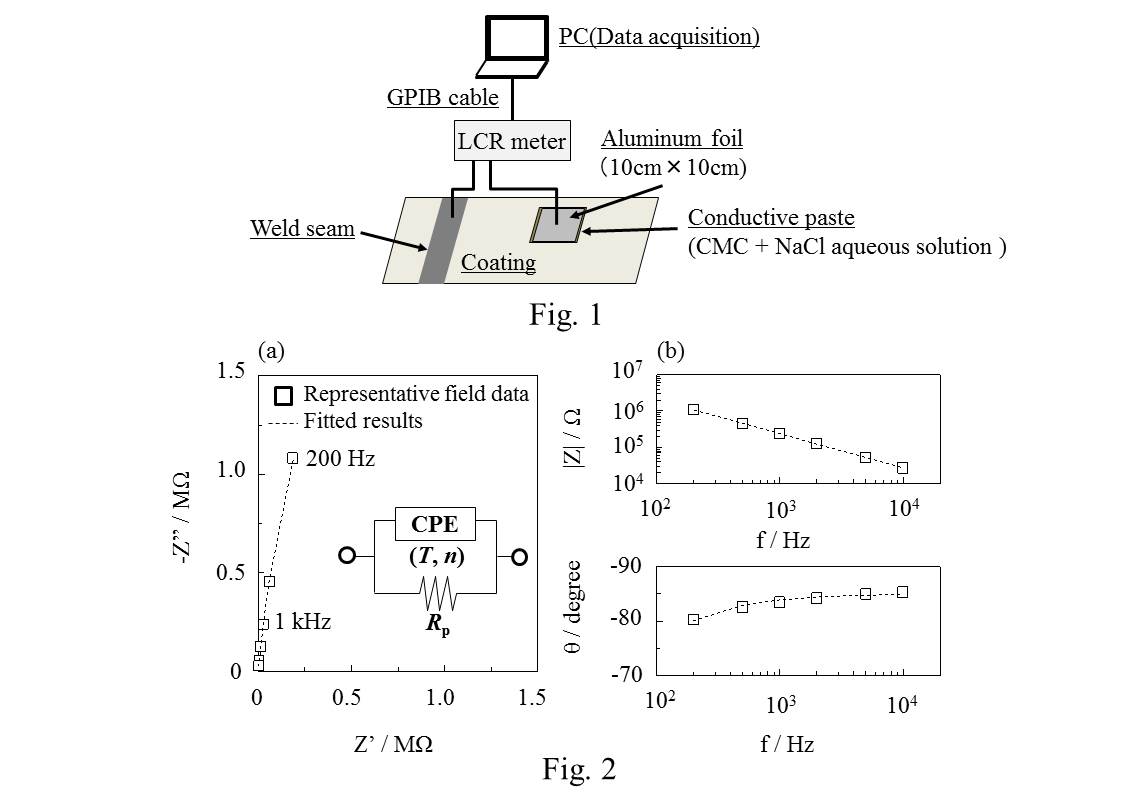