The current–time dependences recorded upon metal transition from the active to the passive state or at the potential jump within the passive range have been repeatedly studied in numerous works1. There is still no general theoretical description of the passivation kinetics of a freshly formed electrode surface2, but it is clear that there should be a time interval between the stages of dissolution without a passive film and repassivation, within which passive film islets appear and begin to grow.

As was noted, the hydrogen charging of iron, nickel, and stainless steels increases the rates of their corrosion, decreasing the resistance against pit formation3,4. The transition kinetics of hydrogen charged metal into the passive state is of certain practical importance and necessary for deep understanding of such phenomena as corrosion cracking, pitting corrosion, and corrosion–erosion wear.

The object of this work was to study the passivation kinetics of hydrogen charged iron in borate solutions in a broad range of potential values, including passivity, active–passive transition and prepassivity states of the metal.

The experiments were carried out on iron (0.009%С) membranes 100 mm thick in a 0.4 M H3BO3 + x ml 0.1M Na2B4O7 10H2O solution (pH 6.7 and 7.3) deaerated with argon at 20 ± 2°С. Experiments were carried out in a Devanathan–Stachurski cell. The cathodic current i(H) was put on the one (hydrogen charging) side of membrane. The value of i(H) corresponded to a certain hydrogen concentration of the other (working) side of membrane5. To the working side of the membrane, a potential step between the potential of cathodic pretreatment of the electrode surface (Ept) and the E value, at which anodic current transients were, was applied. Potentials are given in the standard hydrogen electrode scale (SHE).

In the current transients recorded on iron at the potentials of active–passive transition and complete passivation in a neutral borate buffer (Fig.), one can distinguish three time intervals, which correspond to the formation of primary passive film, the growth (the increase in thickness) of the barrier layer, and the quasi-steady-state dissolution. Hydrogen produces nearly no effect on the growth rate of the barrier layer, but increases several times the dissolution rate of the layer and, hence, decreases the time period that is necessary for attaining the steady state.

This work was supported by the Russian Foundation for Basic Research, project no. 14-03-00421. 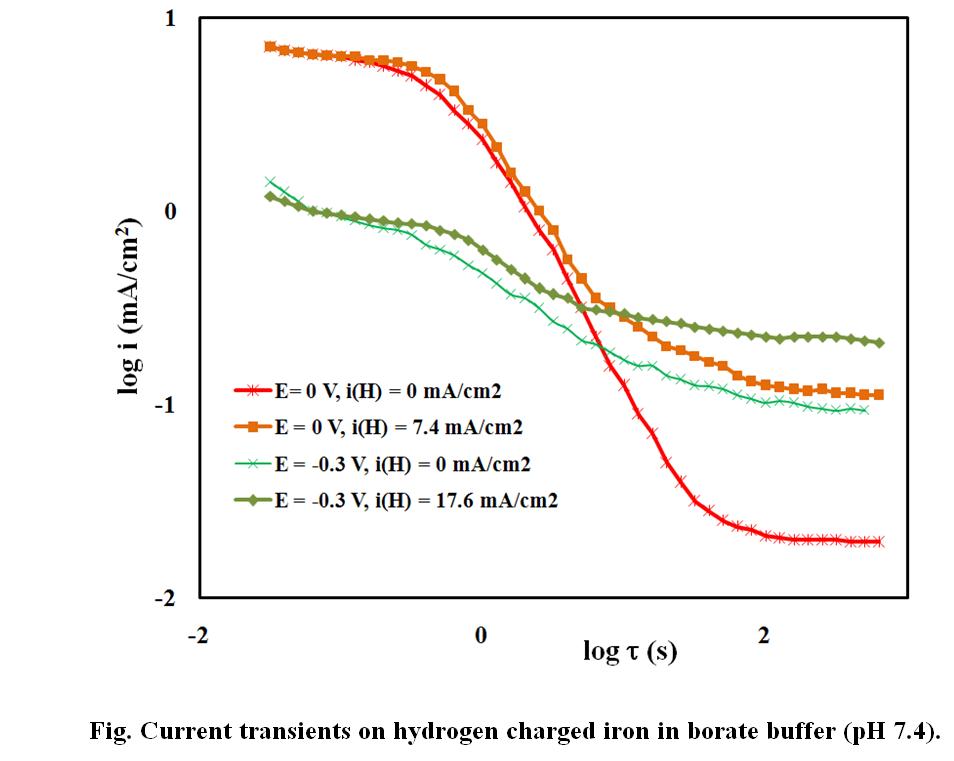