An anticorrosive organic coating have been widely applied to a large steel structure because the organic coating isolates the steel material from a corrosive environments. However, environmental factors such as water, UV, and temperature influence the deterioration of the coating, which leads to under-film corrosion or blistering. An oil spillage from storage tank is one of concern caused by severe corrosion of the steel plate under the organic coating. Therefore, Japanese regulation requires an inspection at least 8-years intervals. However, the appropriate interval in the case that the storage tank suffer a large scale earthquake have not been evaluated and studied. Therefore, it has been important for us to take a precaution against the large-scale earthquake and measures plan after damage.

As soon as the coating is cracked by a large deformation, a steel plate is exposed to the corrosion environment, and the corrosion reaction proceeds immediately. If a large scale earthquake causes the coating degradation, this lifetime could be shortened. For this residual lifetime evaluation, the researches based on both mechanical and chemical approaches would be required. EIS is a quantitative and non-destructive method to accurately monitor the degradation of the coating and the corrosion process. In this study, a coated steel plate painted with the organic coating was used to simulate the damage of the tank bottom coating by a large scale earthquake. Mechanical and electrochemical tests were simultaneously performed to identify a correlation between crack patterns and corrosion behaviors.

The experimental setup and a test piece are shown in Figure 1. Commercially available vinyl ester resin glass flake coatings with different composition were applied onto a mild steel plate (No.1～No.3). Acrylic tubes were fixed to the surface of all test pieces. Electrochemical measurements were performed in 3 wt.% NaCl solution using three electrode system containing saturate Ag/AgCl reference and platinum counter electrodes at room temperature (293 K±5). A stress generated by three point bending test was applied to a test piece in order to deform coating layer and induce a flaw or crack. At the same time, the deformation behaviors of the surface of coating and crack formation was monitored with high speed and precision camera(30 flame/s). The crosshead strain increased at average speed of 0.1 %/sec. After the crack penetrated the coating, the electrode potential immediately indicated corrosion potential of steel. The value of strain which corresponded to this penetration was defined as “threshold strain for corrosion: TSC in this paper. For comparison, the test piece without immersion test was also performed. When the crack was confirmed on the surface by the camera, this value of strain was defined as “threshold strain: TS”. After the corrosion potential reached to a steady state, EIS was measured. The frequency was swept from 10 kHz to 10 mHz with a 10 mV-rms perturbation amplitude. The Data analysis was performed by using the typical software (ZView) and curve fitting by various equivalent circuit models (Figure 2) were tried.

The values of TSC are shown in Table 1. The corrosion potentials were observed in all test pieces. However, the crack cannot be detected by camera in some test pieces. This suggests that micro cracks which will cause a decrease of anticorrosion performance are induced.

In our experimental conditions, after the strain reached to TS value, two patterns of cracking behaviors were confirmed. In the pattern (type A), some cracks were generated and they gradually expanded in almost same direction. In another pattern of (type B), one crack was generated and then it rapidly and linearly expanded. As shown in table 1, impedance model of type B,  A and No.3 without crack corresponded to fitting model Ⅲ, Ⅱ andⅠ, respectively.

This research was performed with financial support from Japan Oil, Gas and Metals National Corporation. 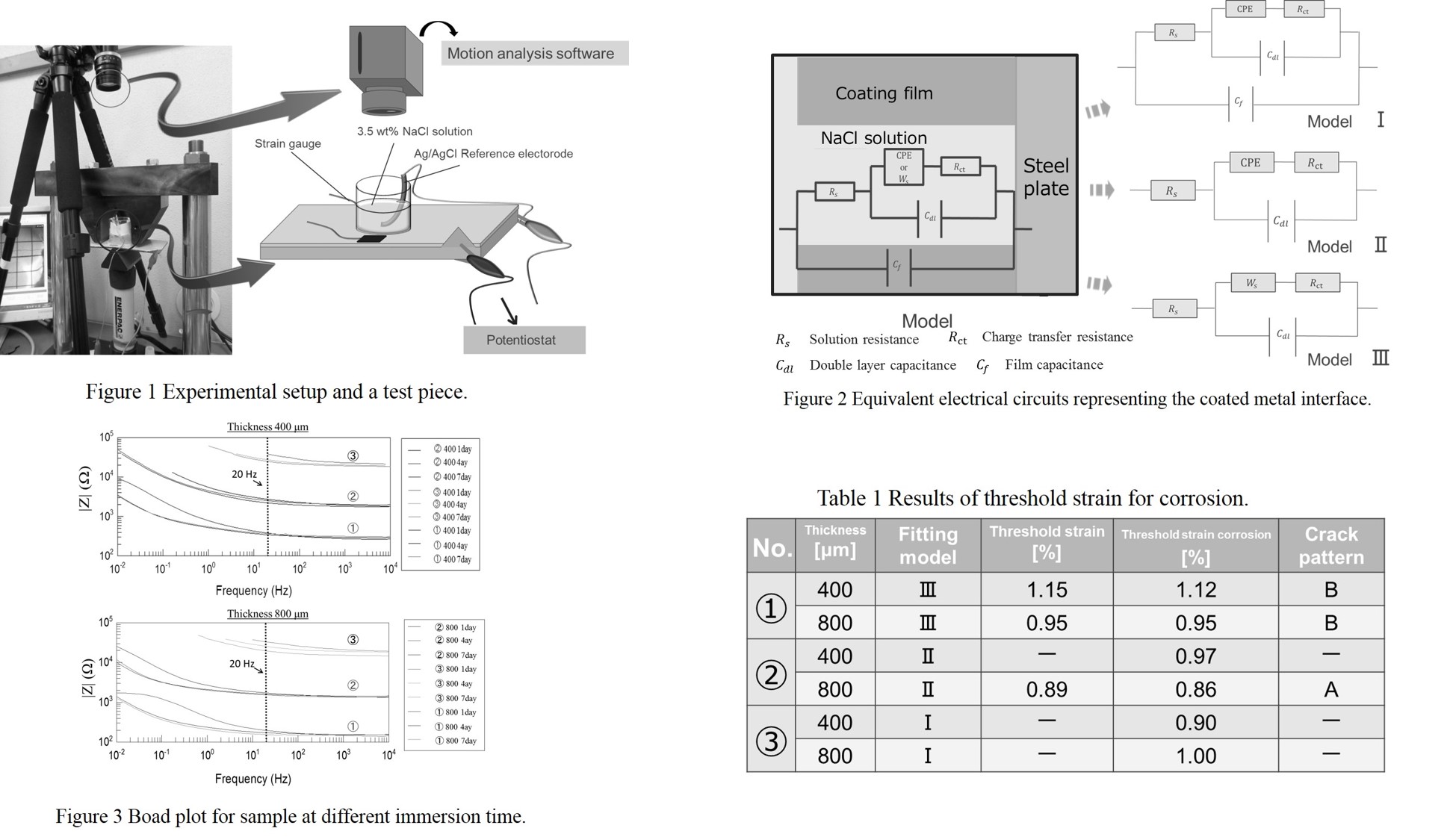