Lithium ion batteries (LIBs) with greater       energy density are required for use in energy-demanding applications such as electric cars and electronic devices. Silicon is an attractive candidate anode material for use in LIBs due to its high theoretical capacity (4200 mAh/g) compared to carbon (372 mAh/g) currently used in commercially available lithium ion batteries.

The commercial use of Si-based powders in anodes remains hindered by the low electrical conductivity of silicon and its huge volume change during lithiation and delithiation.

Many studies have been conducted to alleviate the pulverization of silicon during the charge/discharge process and to increase the conductivity of silicon materials. Recently, several approaches for synthesizing 3D porous Si-based anode materials that exhibit good cycling characteristics have been developed. Several approaches employ a wet-chemical etching process using hydrofluoric acid (HF) and silver nitrate (AgNO3). The fabrication process consists of two steps. First, Ag is deposited on silicon nanoparticles using HF and AgNO3. Subsequently, the particles are immersed into HF and hydrogen peroxide (H2O2), resulting in the generation of 3D porous silicon nanoparticles. However, HF is a dangerous chemical and thus a process not requiring HF for the fabrication of Ag-deposited silicon particles is required.1,2,3)

fabricated using an alkaline method and describe their charge/discharge properties as a LIB anode material.

The microstructures of the samples were observed using field-emission scanning electron microscopy (FE-SEM) and scanning-transmission electron microscopy (STEM). Charge-discharge cycle tests of the prepared samples were performed. A coin cell (Model CR2032) was used as the test cell and lithium metal foil was used as the counter electrode. The cut-off potentials for the charge/discharge processes were 0.02 V and 1.5 V (vs. Li/Li+).

Ag-deposited silicon nanoparticles were fabricated using an alkaline immersion plating method in the absence of HF. 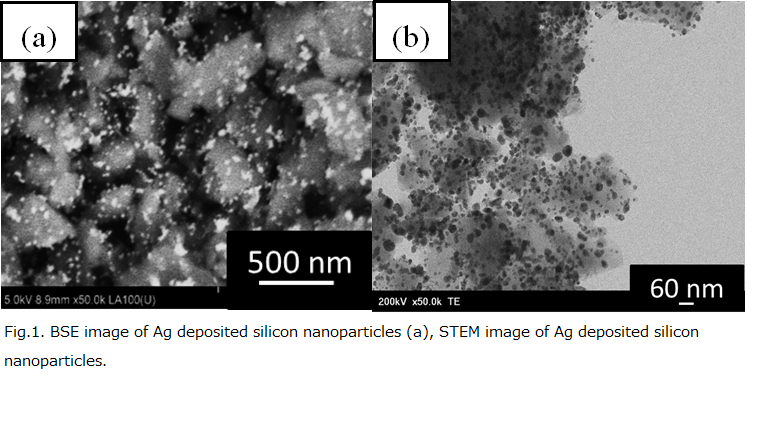