The Cu/SWCNT composite plating bath comprised 0.1 M CuSO4･5H2O, 0.2 M EDTA･2Na, SWCNTs (Super-growth SWCNTs, Zeon Co.) and dispersants. EDTA･Na was used as a copper chelating agent. A magnetic stirrer, an ultrasonic homogenizer and a mechanical atomizer (Star Burst Labo, SUGINO MACHINE Co.) were used to fragment the SWCNT bundles. The dispersibility of the SWCNTs was evaluated using a particle size distribution analyzer. Electrodeposition was conducted under galvanostatic conditions. A pure copper plate and a phosphorus-containing copper plate were used as cathode and anode, respectively. The morphologies of the composite films were observed by field emission scanning electron microscopy (FE-SEM) and the phase structures of the films were analyzed by X-ray diffraction. The thermal and electrical conductivities of the composite films were also evaluated. In addition, the SWCNTs were quantitatively analyzed.

The results demonstrated that fragmentation of the SWCNTs was improved significantly by using a mechanical atomizer. The content of SWCNTs in the films increased with increasing SWCNT concentration in the plating bath. Fig. 1 shows a surface SEM image of a prepared Cu/SWCNT composite plating film and indicates that the SWCNTs are incorporated relatively uniformly into the Cu film. The diameter of the SWCNTs is ca. 15 nm or less, indicating that the bundles of SWCNTs are highly fragmented. 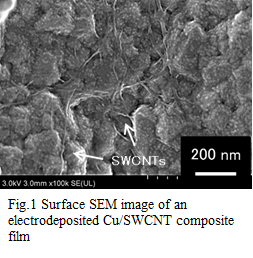