Usage amount of the expensive Pt cathode catalyst in the PEFCs should be reduced for their real commercialization. Core-shell structured catalyst, in which Pt monolayer (PtML) is formed on the other metal core surface, is one of the key technologies for the Pt usage reduction. Furthermore, it has been reported that ORR activity of the PtMLis enhanced when it is formed on Pd core nanoparticles [1, 2]. Recently, we successfully synthesized carbon supported Pd core-Pt shell structured catalyst (Pt/Pd/C) through a modified Cu under potential deposition (Cu-UPD) and Pt replacement processes, and we demonstrated that the ORR mass activity of the Pt/Pd/C catalyst is drastically enhanced with an accelerated durability test (ADT) performed at 80°C [3].

Although the modified Cu-UPD and Pt replacement are suitable processes for the mass-production of the catalyst, they are still complicated. In this study, carbon supported PtPd alloy catalyst (PtPd/C) was synthesized by a simple one-pot impregnation method.  Changes in the ORR activity and microstructure of the catalyst with the ADT and chemical de-alloying (CDA) are investigated.

The PtPd/C alloy catalyst was synthesized with a one-pot impregnation reduction process. Pt(C2O4) and Pd(NO3)2 were dissolved in water and a carbon support (Vulcan XC-72R) was ultrasonically dispersed, followed by evaporation of H2O. The resultant mixture was heat-treated at 600oC for 4 h in 15% H2/85% Ar atmosphere. The PtPd/C catalyst was characterized with TG, XRF, XRD, TEM, TEM-EDX, CV and CO stripping voltammetry. The ORR activity of the catalyst was evaluated by RDE technique in O2 saturated 0.1 M HClO4 at 25°C. The ADT was performed using a rectangular wave potential cycling (0.6 V (3 s)-1.0 V (3 s) vs. RHE) in Ar saturated 0.1 M HClO4 at 80°C for 10,000 cycles. CDA treatment was carried out in 2 M H2SO4 containing 10 mM CuSO4with coexistence of metallic Cu sheet. The PtPd/C catalyst was dispersed in the solution and stirred at 60°C for 24 h with air bubbling.

XRF analysis revealed that composition of as-synthesized PtPd/C catalyst is Pt20Pd80 (atomic %) and XRD pattern showed that Pt and Pd are well alloyed in the catalyst. CVs of the Pt20Pd80/C catalyst are shown in Fig. 1. Hydrogen absorption peak can be clearly observed in the as-synthesized PtPd/C catalyst in 0.05-0.1 V, implying that Pd exists on the surface of the as-synthesized PtPd nanoparticle catalyst. On the contrary, the hydrogen absorption peak almost disappeared with the ADT and the CDA, suggesting that the surface Pd atoms dissolved and Pt shell was formed. We conducted TEM-EDX elemental mapping and line analysis of the PtPd/C catalysts (Fig. 2), which showed that the catalyst changed into quasi core-shell structured catalyst with the ADT and the CDA. 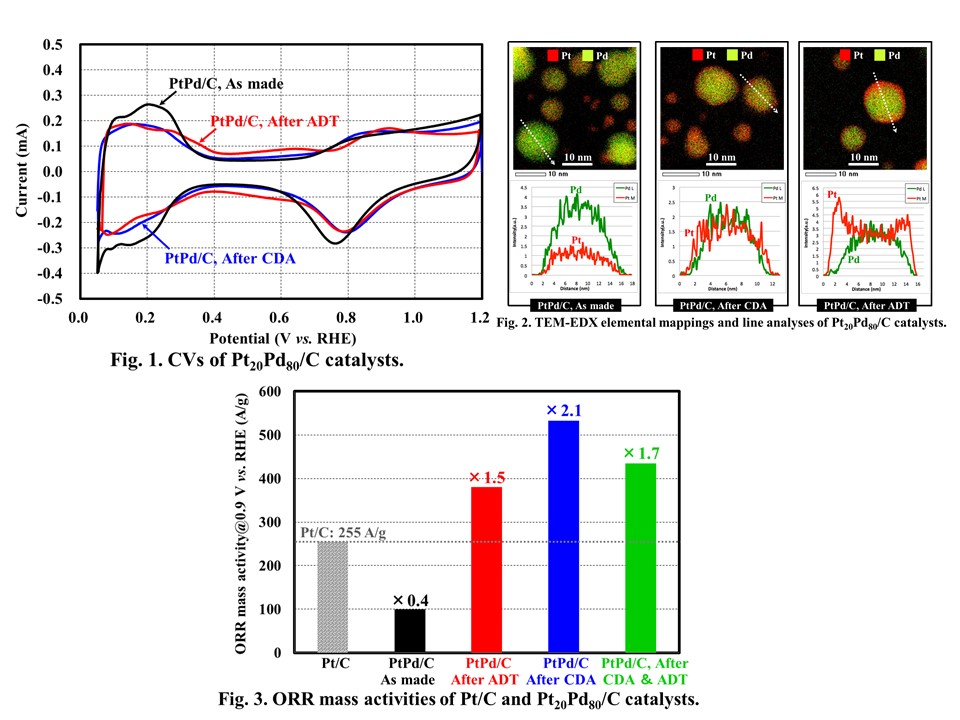