West Hall 1 (Phoenix Convention Center)
Y. Chino (University of Yamanashi), Y. Senoo (Engineered Materials Sector R&D Center), K. Kakinuma, M. Watanabe (Fuel Cell Nanomaterials Center, University of Yamanashi), and M. Uchida (Fuel Cell Nanomaterials Center,University of Yamanashi)
Platinum catalysts supported on carbon black (Pt/CB) have been widely applied as the cathode catalysts for PEFCs. It is well known that the CB degrades under high potential operating conditions. In order to improve the durability of the support, SnO2 have been proposed as an alternative to carbon.1 The enhancement of the electrical conductivity of SnO2 by doping of aliovalent cations (e.g., Sb5+) was shown to be accompanied by an improvement of the ORR activity.2 We also reported that the electrical conductivity of Nb-doped SnO2 nanoparticles improved by the fused aggregation of particles with nearest-neighbors and by construction of a CB-like randomly branched structure (fused aggregate structure).3 Moreover, the single cell performance using a Pt cathode catalyst supported on the Nb-SnO2 (Pt/Nb-SnO2) was reported to be higher than that using commercial Pt/CB.4-6 In this research, we evaluated the cell resistance using a Pt/Nb-SnO2  cathode catalyst layer as a function of cell potential, current density and AC frequency, and investigated the reason for the unique electrically conducting behavior of the catalyst layers.

The Nb-SnO2 supports with fused aggregate structure were synthesized by the flame combustion method and were loaded with nanometer-sized Pt catalysts by the colloidal method (Pt loading; 16.5 wt% and 9.6 wt%). The catalyst inks for cathodes were prepared with the Pt/Nb-SnO2, Nafion® binder, ethanol and pure water, and were sprayed onto the Nafion membrane by the pulse-swirl-spray technique. The Pt loading amounts on the cathode catalyst layers were 0.16 mg cm-2 (16.5 wt%) and 0.08 mg cm-2 (9.6 wt%), which meant that the Nb-SnO2 loading amounts were almost the same (1.0 ± 0.1 mg-support cm‑2). The Japan Automobile Research Institute (JARI) standard cell (active geometric area 29.2 cm2) was used for the electrochemical measurements. The impedance spectra were potentiostatically measured under steady-state operation, with hydrogen and oxygen/air at 80◦C under ambient pressure. The utilizations of the reactant gases were 70% for H2, 40% for O2 and 40% for air. Each cell resistance was estimated from the intercept of the x-axis of the Nyquist plots.

Figure 1 showed the cell potentials and ohmic resistances obtained by impedance spectra at 80 oC, 100% RH. In general, the cell ohmic resistance derives mainly from the proton conductivity of the membrane and is maintained stable value at 100% RH, as indicated in the cell resistance using heat-treated Pt catalyst supported on graphitized CB (Pt/GCB-HT). In contrast, the cell ohmic resistances using both Pt/Nb-SnO2 cathodes decreased with increasing current density. The resistance of the cell using 16.5 wt% Pt/Nb-SnO2 at 150 mA/cm2 was approximately the same as that using the Pt/GCB-HT cathode. The resistance using the 16.5 wt% Pt/Nb-SnO2 cathode was less than half of that using the 9.6 wt% Pt/Nb-SnO2 cathode. Figure 2 showed the Nyquist plots for these cells at 0.65 V. The intercept of x-axis of each Nyquist plot appeared at different frequency. In addition, we found that the ohmic resistances of the cell using Pt/Nb-SnO2 cathodes were strongly dependent on the cell potential, as shown in Fig. 3. In our previous research, we reported that the electrical conductivities of Nb-SnO2 supports were dependent on the atmospheric condition, and increased with increasing amounts of loaded metallic Pt. The conductivity of the catalyst reached the values more than three orders of magnitude larger than that of the bare support.3 Such phenomena should strongly be related to the thickness of the depletion layer of the Nb-SnO2 supports.3 which should not pertain to the GCB support, in principle. The cell potential dependence of the resistance using the Pt/Nb-SnO2 cathode indicated that the electrically conductive paths in the Pt/Nb-SnO2 catalyst layers should be improved with decreasing cell potential due to reduction of Pt oxide to metallic Pt.

This research was supported by funds for the “Research on Nanotechnology for High Performance Fuel Cells” (HiPer-FC) project from the New Energy and Industrial Technology Development Organization (NEDO) of Japan. 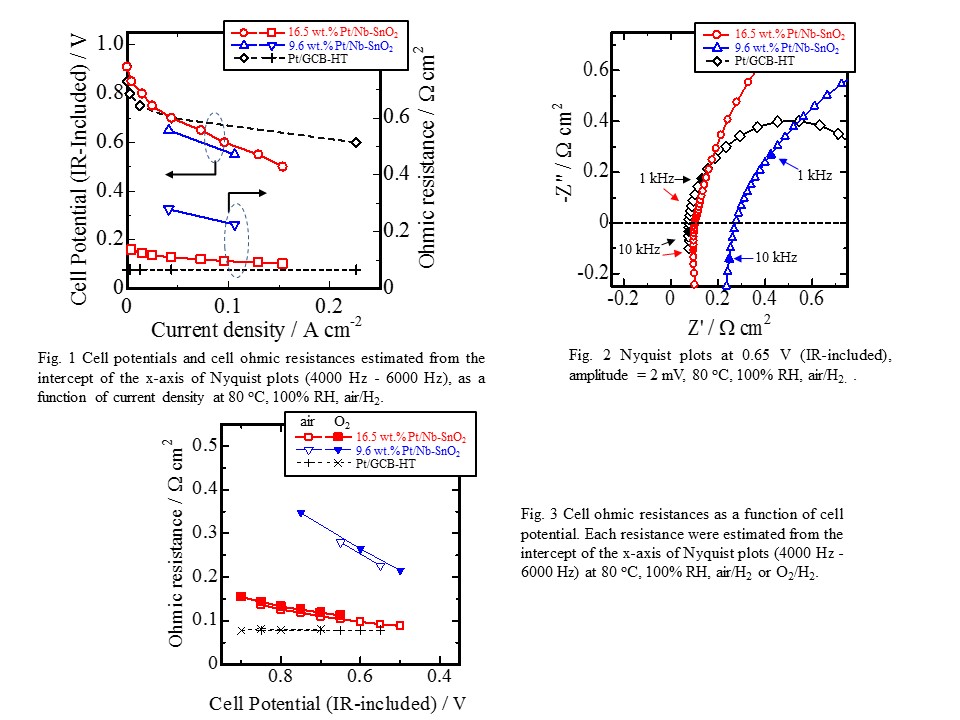