Silicon nitride films (SiNx) formed at low temperature are strongly required in very shrunk LSI process. The plasma silicon nitride formation technology with low damage at low temperature has been reported [1]. We have reported that the amount of active nitridation species in the process is important to form to high quality SiNx, especially on the side wall [2]. When the oxygen impurity is remained in the process gases, the oxygen is excited during the plasma processing. Then the excited oxygen is degraded the SiNx film quality [3-6]. However, it has not been reported the effect of inactive oxygen molecules in the nitridation process. In this paper, we report the effect of the impurity oxygen in post charge flows on the process of nitride formation.

Fig.1 shows the schematic diagram of the experimental setup used for the reaction products measurement in the gases. It has a mixing point placed at downstream of a Nitrogen Radical Generator [7]. The produced gases reacted from the nitrogen radicals and O2 gas are measured by Fourier Transform Infrared spectroscopy (FTIR). The impurity concentration of oxygen in N2 gas was less than 1 ppb, this indicates the oxygen impurity of supply gas did not affect the experimental results. Nitrogen radicals concentration was generated by the Nitrogen Radical Generator several ten ppm in the N2 gas [7]. The pressure in Nitrogen Radical Generator was varied from 30 to 120 kPa in the case of the N2 flow rate at 5, 7, and 10slm. The O2flow rate were varied from 8 to 190 sccm.

This research has been carried out at fluctuation free facility of New Industry Creation Hatchery Center, Tohoku University. 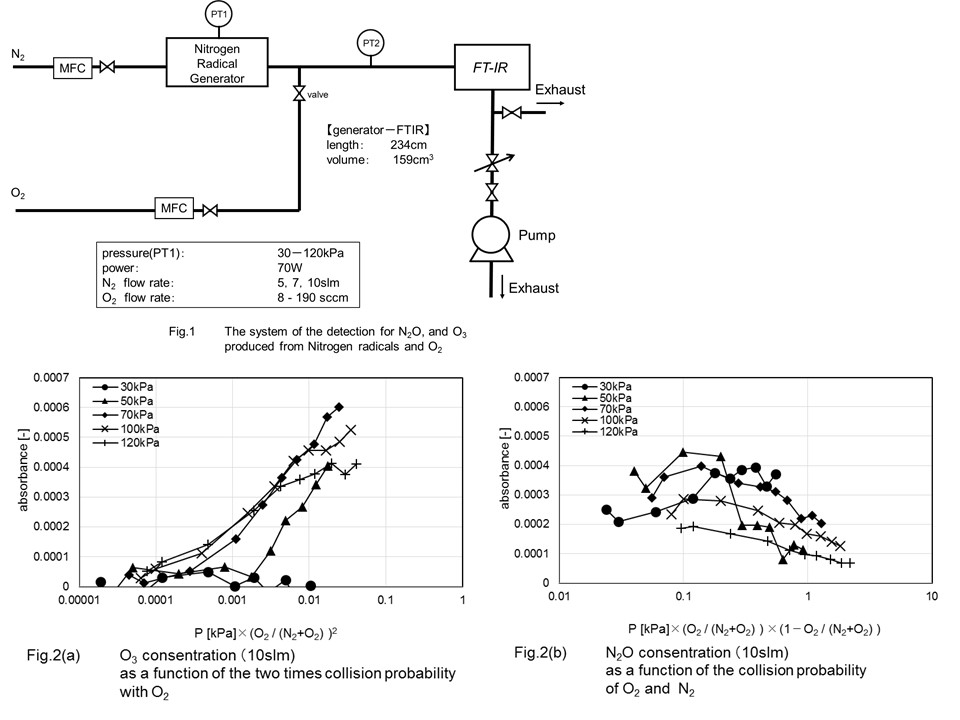