103-A (Phoenix Convention Center)
T. Yajima (JST-CREST, The University of Tokyo), G. Oike, T. Nishimura (The University of Tokyo), and A. Toriumi (The University of Tokyo)
In the fabrication of electronic devices, dopant distribution in the semiconductor has to be controlled on the microscopic length scale in the device structures. While ion implantation has widely been utilized for this purpose, it poses substantial cost as well as a technological challenge in activating implanted dopant impurities. Such a burdensome process is not applicable to all semiconductors, especially oxide semiconductors which are utilized for low-cost applications such as displays, sensors, solar cells, etc. As an alternative to ion implantation, electrochemical doping would be promising for oxide semiconductors given the relatively high diffusivity of ions in these materials. Various electrochemistry-related techniques have already been utilized in oxides, including cathodic oxidation for oxide growth [1], resistance switching for high-density memory [2], and electrochromism for smart windows [3]. These previous examples imply electrochemical doping could be a feasible doping technique in a range of oxide semiconductors.

In this work, electrochemical doping was demonstrated in an archetypical oxide semiconductor TiO2, reducing the Ti4+ to Ti(4-d)+ to drastically enhance electronic conductivity at room temperature. The experiments showed the dopants were relatively homogeneous in the plane, and distributed on the length scale of several tens nanometers from the surface, resulting in the average electron concentration of 1020 /cm3in the 30 nm thick film. Furthermore, the technique was successfully applied to photolithography patterns with sub-micrometer resolution. These results indicate electrochemical doping can be an attractive alternative to ion implantation, enabling electronic doping to oxide semiconductors in microscopic patterns.

In the experiments, polycrystalline single-phase anatase TiO2 films were fabricated by amorphous deposition at room temperature and crystallization by thermal treatment. Amorphous deposition was performed by pulsed laser deposition in 1 × 10-5 bar O2 with the film thickness of 20-35 nm on SiO2(119 nm)/n+:Si substrates. Crystallization was induced by thermal treatment in 1 bar O2 at at 500 oC for 30 min. Electrochemical doping was performed by using the TiO2 film as the cathode and the Al wire as the anode, leading to the increased conductivity of TiO2 films from < 1.0 × 10-4 S/cm to 35 S/cm. The sheet conductivity of the TiO2 films saturated as the film becomes thicker, indicating the dopants are distributed in the length scale of around 20 nm from the surface. In the plane, on the other hand, a relatively homogeneous conductivity was observed by conductive atomic force microscopy (cAFM). Electrochemical doping was further performed through the micro-patterned resist on the TiO2surface, leading to conductivity increase only in the exposed area (Figure 1). The edge of the conductivity pattern had the sharpness of ~100 nm (almost measurement resolution), indicating at least sub-micrometer control of dopant distribution was realized by this technique. The conductivity was maintained more than a few months without surface passivation, implying the feasibility of this technique as an alternative to ion implantation in various oxide semiconductor thin films.

This work was partially supported by JSPS Core-to-Core Program and The Foundation for The Promotion of Ion Engineering. 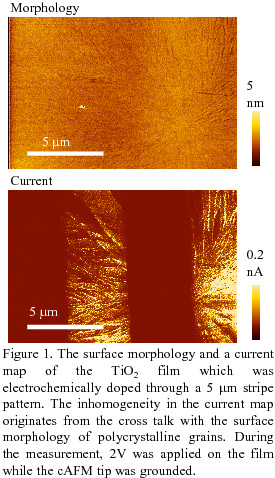