103-A (Phoenix Convention Center)
B. Unveroglu (University of Virginia) and G. Zangari (University of Virginia)
Low cost and non-toxic Cu2ZnSnS4(CZTS) absorber layers are promising candidates for high performance solar cells due to the high absorption coefficient and a suitable direct band gap [1]. The current world record efficiency is around 12% for CZTS (Se) absorber layer based solar cell [2]. Electrodeposition and annealing (EDA) method is one of the favorable production processes for CZTS solar cells [3,4]. An efficiency of 7% was obtained for CZTSe film prepaired from a sequentially electrodeposited metal stack of Cu, Sn and Zn precursor [3]. The champion  efficieny of 8% among the absorber layers manufactored by EDA method was achieved via selenization of metallic Cu-Zn-Sn alloy precursor film [4].

Alloy deposition of Cu-Zn-Sn enables the growth of ternary alloy from a single bath solution. However, the different reduction potentials of metal ions influence the uniformity and morphology of precursor films and the stability of the solution bath [5]. Our aim is to obtain a suitable solution bath for the electrodeposition of Cu-Zn-Sn with complexing agents and surfactants to manufacture compact, uniform and smooth ~ 1 cm2 precursors to form CZTS via sulfurization. Alloy electrodeposition was performed from an acidic solution at room temperature. Cu-Zn-Sn alloy precursor films have a suitable composition to form CZTS with atomic ratios Zn/Sn~ 1 and Cu/(Zn+Sn)~1 [Figure 1]. The electrodeposited Cu-Zn-Sn precursors were sulfurized in a quartz tube in argon atmosphere at 500-550°C for 1-2 hours. The crystal structure of the films was investigated by X-ray diffraction and Raman spectroscopy. XRD patterns after sulfurization of the precursors are shown in Figure 2. These films dominantly show peaks from the CZTS phase with a few reflections from secondary phases. Photoresponse of CZTS films was investigated in 0.1M Eu(NO3)3 solution with pH 2.3 under simulated solar light. The current-voltage plot for the CZTS film with Zn/Sn atomic ratio 1.37 is shown in Figure 3. The cathodic photocurrent increased gradually at more negative potentials, which suggests CZTS film exhibit p-type conductivity. The photocurrent produced around -0.95 V (vs. MSE) is 0.51 mA/cm2.

Figure 1 Composition of precursors as a function of deposition potential

Figure 2 XRD patterns for precursors after sulfurization at 500°C

Figure 3 J-V plot of the photocurrent response of CZTS film in 0.1M Eu(NO3)3solution 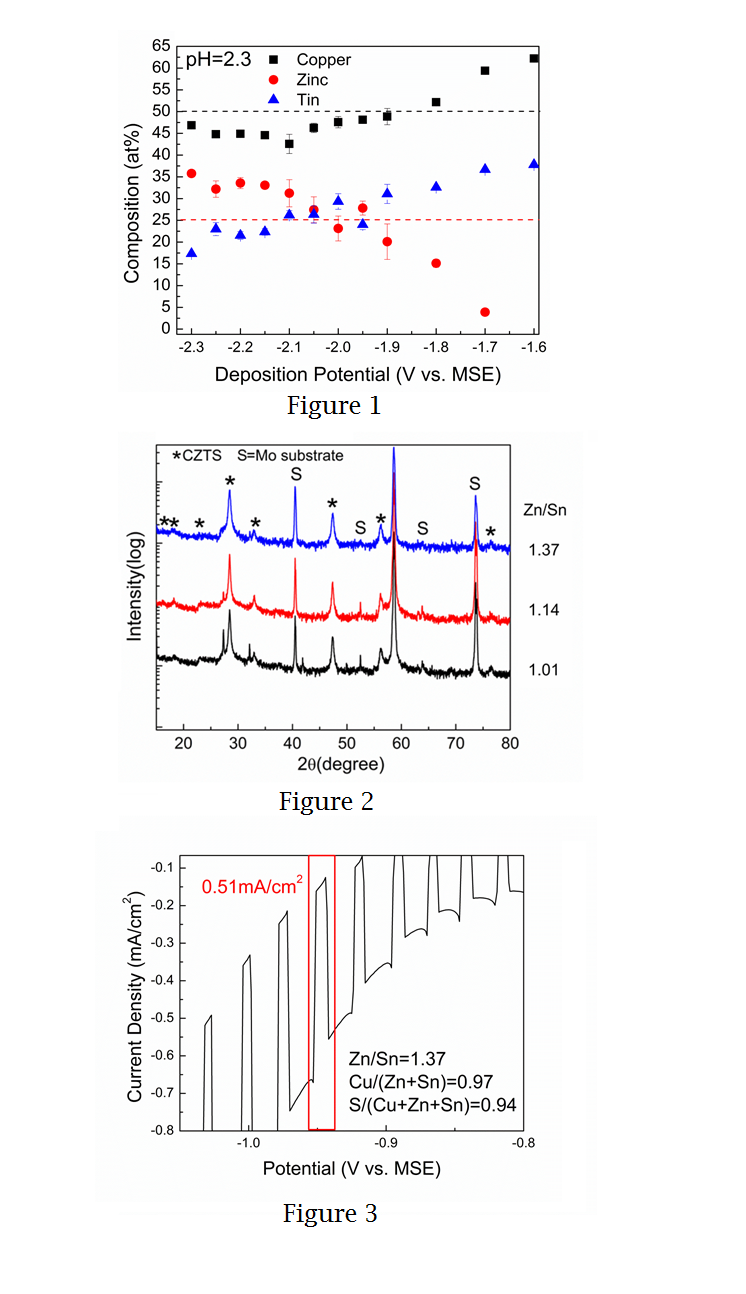