101-A (Phoenix Convention Center)
S. Solchenbach (Technische Universität München), M. Metzger (Technische Universität München), and H. A. Gasteiger (Technical University of Munich)
The high reversibility of lithium ion batteries is largely related to the use of electrolyte components that form a solid-electrolyte interphase (SEI) on the anode, preventing further reduction of the bulk electrolyte but allowing reversible intercalation of Li-ions into graphite. Regarding SEI formation, ethylene carbonate (EC), vinylene carbonate (VC) and fluoroethylene carbonate (FEC) have proven to be outstandingly effective. While EC is reduced around 0.9 V vs Li/Li+ to mostly lithium ethylene dicarbonate [1], VC is reduced at potentials > 2 V vs Li/Li+, forming an effectively passivating polymeric film of poly(VC) on the anode [2]. FEC has also been reported to form oligomeric or polymeric films when reduced, although their exact nature still remains debated [3, 4].

For high voltage materials like LiMn1.5Ni0.5O4 or LiCoPO4, the anodic stability of electrolyte components has become crucial. In the absence of water contamination, EC is oxidized significantly only above 4.8 V vs Li/Li+ to oligomeric species [5, 6]. In contrast, VC strongly decomposes around 4.6 V vs Li/Li+, making it unsuitable for the application with high voltage electrodes [7], although the mechanism of this reaction has not been investigated. As a fluorinated carbonate, FEC is thought to be less prone to oxidation than EC [8], but little is known about the nature of its oxidation products and their effect on cell performance. In the current study we investigate the anodic and cathodic decomposition reactions of EC, VC and FEC by on-line electrochemical mass spectrometry (OEMS) and examine the resulting decomposition products by different spectroscopic techniques.

Firstly, electrolytes based on pure EC, VC, or FEC with LiPF6 salt are used in combination with carbon black model electrodes. During anodic and cathodic potential sweeps to 0 V or 5.5 V vs Li/Li+, respectively, gas evolution is monitored potential-resolved by OEMS. In this way, decomposition pathways of the single electrolyte components upon reduction or oxidation are explored. For oxidative scans, isotopically labelled 13C-carbon electrodes are used to distinguish between CO2 and CO from solvent decomposition on the one hand and carbon corrosion on the other hand. To prevent any cross-talk with the lithium metal counter electrode, an improved sealed 2-compartment cell setup is used [5]. The decomposition products at different potentials are further investigated ex-situ by nuclear magnetic resonance (NMR) and Fourier-transformed infrared (FTIR) spectroscopy of electrodes and electrolytes. Additionally, surface film formation at different potentials is monitored via impedance spectroscopy. Furthermore, similar experiments with standard commercial electrolytes (EC:EMC 3:7 w/w + 1M LiPF6) with or without VC/FEC are performed. In this way, the obtained results can be compared to the situation in a real cell, and the effect of the single electrolyte component on cell performance can be estimated.

Acknowledgements:
This work is financially supported by the BASF SE Battery Research Network. 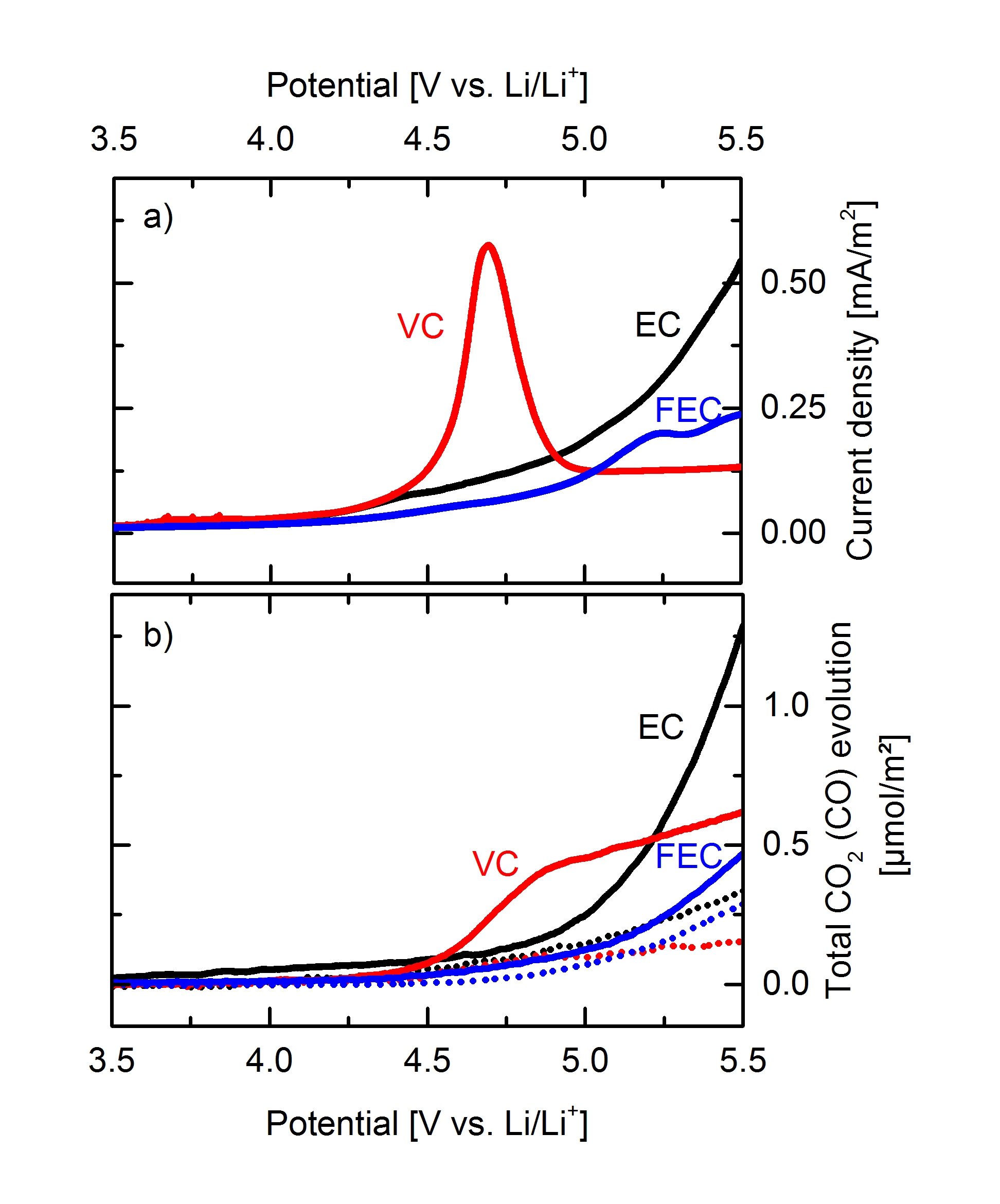