101-A (Phoenix Convention Center)
T. Jaumann, J. Balach, M. Klose (Leibniz Institute of solid state and material research), S. Oswald (Leibniz Institute of solid state and material research), U. Langklotz (TU Dresden, Institute for material science), H. Althues (Fraunhofer IWS, Dresden), J. Eckert (Montanuniversitðt Leoben, Department Materials Physics, Erich Schmid Institute of Materials Science), and L. Giebeler (Leibniz Institute for Solid State and Materials Research)
Silicon is a promising negative electrode in Li – ion and post Li – ion batteries owing to its low discharge potential and its high capacity of about 4000 mAh/g which is up to 10 times higher than commonly used graphite. A crucial parameter determining the electrochemical performance of particularly nanostructured silicon electrodes is the solid-electrolyte-interface (SEI). It is supposed that the SEI is instable on silicon due to the enormous volume change of about 300% upon lithiation/delithitaion. This instability causes a continuously growing passive surface film on the nano-silicon resulting in a low reversibility whereas bulk silicon rather suffers from pulverisation. An effective approach to stabilize the SEI and therewith enhancing the reversibility of nano-silicon electrodes is the modification of electrolyte components and the addition of additives (i.e. FEC). Most commonly carbonate-based electrolytes are used for such studies, but the investigation of ethers is gaining increasing attention due to their excellent compatibility in prospective high-energy lithium – sulfur (Li - S) batteries. Considering that silicon is a promising anode to replace disadvantageously metallic lithium which causes uncontrollable dendrite growth and depletion of electrolyte, an investigation with this focus is of particular interest. Only little is known how these electrolyte modifications influence the characteristics of the SEI on silicon-based electrodes, but a detailed understanding of the surface characteristics is of high importance to develop advanced electrolyte configurations and to enhance the reversibility.

Herein, we studied the interfacial characteristics on a nanostructured silicon electrode cycled in ether-based electrolytes and compared the results to our recent findings with carbonate-based electrolytes. The electrolytes have been modified with well-known additives for Li – S batteries, a fluorinated ether (TTE) and lithium nitrate. The silicon electrodes were exposed to long-term cycling in a half-cell set-up (vs Li/Li+) to demonstrate the importance of such additives (Figure 1). After cycling the post-mortem electrodes were carefully studied by different techniques including XRD, XPS and electron microscopy (SEM/TEM). We used a recently developed silicon-carbon nanocomposite composed of silicon nanoparticles of less than 5 nm embedded into a carbon scaffold. This nanocomposite provides a delithiation capacity of up to 2000 mAh/gSi (five times more than graphite) and an excellent cycle retention of nearly 100 % after 200 cycles in a carbonate-based electrolyte configuration (Figure 1). However, a considerable poorer reversibility is observed in an ether-based electrolyte which is supposed to be caused by a different SEI composition. Since the nanocomposite exhibits a high surface area, a detailed characterization of the interfacial characteristics is possible. The occurrence of diverse SEI-compounds like semi-organic carbonates, LiF, Li2O, phosphorous and sulfur species will be discussed in context of the electrochemical results.

Closing the gap between the basic-research and real application, we studied the effect of polysulfides on the electrochemical performance and on the SEI formation of the silicon electrode in a full-cell set-up. Therefore, a pre-lithiated silicon electrode was assembled with a conventional sulfur electrode and galvanostatically tested for long-term cycling. We will highlight the superior electrochemical performance of the nano-silicon anode instead of metallic lithium. The SEI characteristics of the post-mortem silicon electrode are compared to the silicon electrode cycled in the polysulfide-free ether electrolyte. The results will help to understand degradation mechanism and to design advanced electrolytes for silicon-based electrodes in high-energy lithium-based batteries. 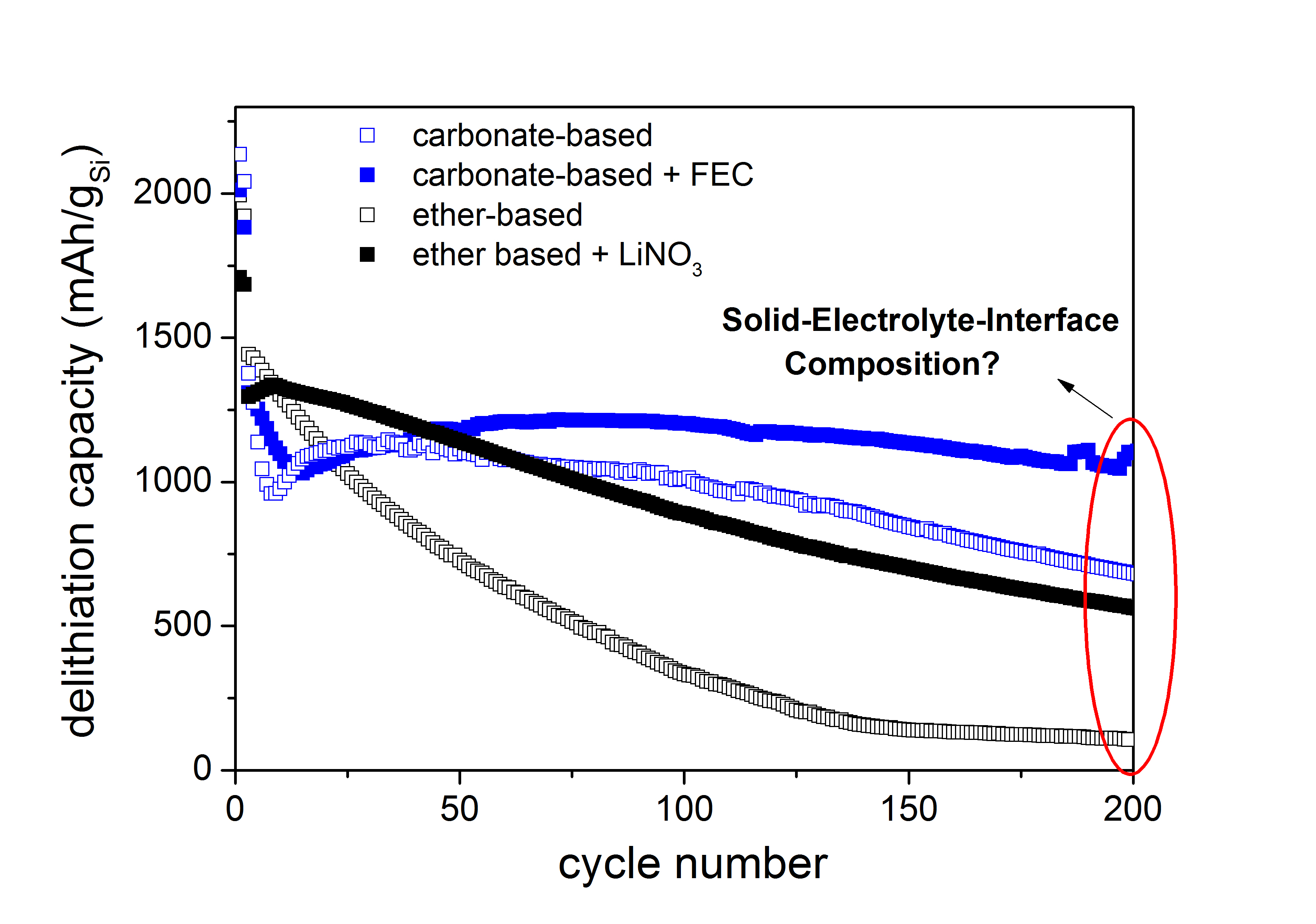