695
Role of Confinement in Localized Corrosion

102-A (Phoenix Convention Center)
R. Puranik (University of Rochester) and D. J. Quesnel (University of Rochester)
In context of localized corrosion, the dissolution of metallic species into a bulk electrolyte solution will produce negligible changes in the concentration of a bulk solution (Refer Fig. 1a).  However, if the immediate environment is confined and has limited electrolyte with respect to the metal surface area - as would be the case for a crevice, environmentally assisted cracking, or a deep pit - the limited amount of dissolved species produced as a result of anodic dissolution would be adequate to change the chemical composition (i.e. concentration) of the confined solution as shown in Fig. 1a.  Should the change in chemical environment be adequately adverse, these primary reaction products will lead to secondary reactions within the confined space, thus accelerating corrosion damage.  This research explores the quantitative effect of confinement on chemical reactivity of metals susceptible to pitting and stress corrosion cracking (SCC).

To investigate the effects of confinement, a simulated crevice was created by maintaining a tight spacing between the polished surface of  a flat pH probe and the metal test specimen, as shown in Fig. 1b.  The pH probe and the solution are held against the sample by an inert polyethylene fixture.  Sensitized AA5083 was chosen as the test material because of its susceptibility to SCC as a result of intergranular precipitates of Al2Mg3 known as β-phase.  The electrolyte was pH neutral 0.1 M sodium chloride solution.

Exposing AA5083 to neutral-pH NaCl solution under confinement in free corrosion conditions triggered a spontaneous localized alkaline corrosion, which resulted in a gradual evolution of the pH from 6.9 to roughly 9. At this higher pH value, the passivation film was damaged and hydrogen evolution that promotes the increase in pH was observed as the counter-reaction to aluminum oxidation.  This research presents the effect of different ratios of metal surface area to electrolyte volume on the reaction kinetics, as characterized by the evolution of the solution pH with time. Surface area to volume ratios ranged from 4 cm2/ml to 100 cm2/ml.  The results are supported with microscopic analysis and EIS studies. 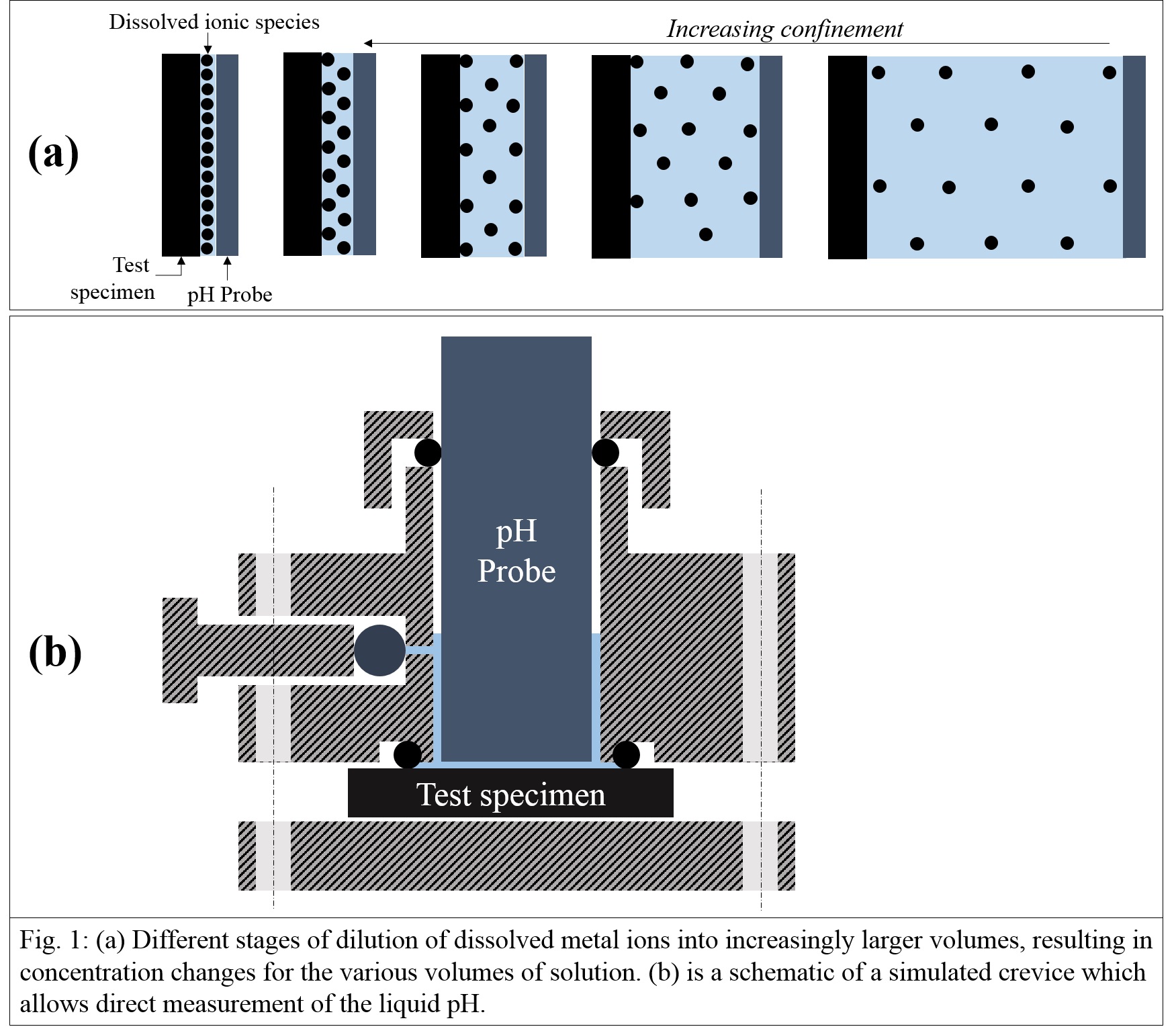