102-A (Phoenix Convention Center)
M. Parker, S. Shrivastava (University of Virginia), and R. G. Kelly (University of Virginia)
Aluminum-lithium (Al-Li) alloys are attractive for aerospace applications because of their improved strength-to-weight and stiffness-to-weight ratios, fracture toughness, and corrosion resistance compared to legacy alloys1. Because aerospace structures are exposed to corrosive atmospheric conditions, these alloys can suffer from various forms of localized corrosion. Localized corrosion susceptibility and attack rates are difficult to predict, so accelerated laboratory testing is used for lot acceptance, new alloy and temper development, and material lifetime predictions. Many standardized accelerated tests are currently used for high-strength aluminum alloys (ASTM standards G34, G85, G110, and B117), but these tests can produce drastically different results for the same alloy.  This disagreement among tests, which are all aimed at assessing localized corrosion resistance, limits their utility and hampers alloy and temper development.  Understanding the testing variables that control localized corrosion development is a goal of this work.

Four key accelerated testing variables have been identified for this study. These include elevated testing temperature, high chloride concentration, low solution pH, and increased reduction kinetics (either by adding an oxidizing agent or because of the short oxygen diffusion distance through a thin electrolyte film). Each accelerated test considered here incorporates several of these accelerating factors. The purpose of this study is to develop a quantitative understanding of the impact of each accelerating factor on the exfoliation corrosion of Al-Li alloys. This knowledge will be used to explain the discrepancies observed in current accelerated testing results and to suggest an improved testing protocol.

Previous work has shown that out of the four key testing variables, the presence of an oxidizer has the most impact on corrosion potential, and solution pH has the most effect on polarization resistance (when testing under constant immersion conditions). These results are shown in Figure 1. To better understand the effect of oxidizing agents on the corrosion kinetics of AA2060, polarization curves measured in various solutions containing oxidizing species such as KNO3, H2O2, and K2S2O8will be presented and discussed.

Other notable results indicate that in salt fog tests such as dry bottom (DB) and wet bottom (WB) MASTMAASIS, the thickness of the electrolyte film present on the sample during certain parts of the 6 hour testing cycle is critical. During the 195 minute dwell period in DB testing, the relative humidity in the chamber stays low, resulting in a very thin electrolyte film on the sample. In contrast, the relative humidity can rise as high as 95% during the same period in WB testing, resulting in a thicker electrolyte film on the sample. As shown in Figure 2, DB MASTMAASIS produces exfoliation in the susceptible AA2060-T3, but WB MASTMAASIS does not. This phenomena will be further investigated by measuring electrochemical kinetics for AA2050-T3 (susceptible) and –T86 (resistant) under a thin electrolyte film.

The authors would like to thank the Office of the Undersecretary of Defense Corrosion University Pilot Program under the Direction of Mr. D. Dunmire and Rolls-Royce for supporting this work, and we would like to thank Alcoa for providing materials and assisting with testing. 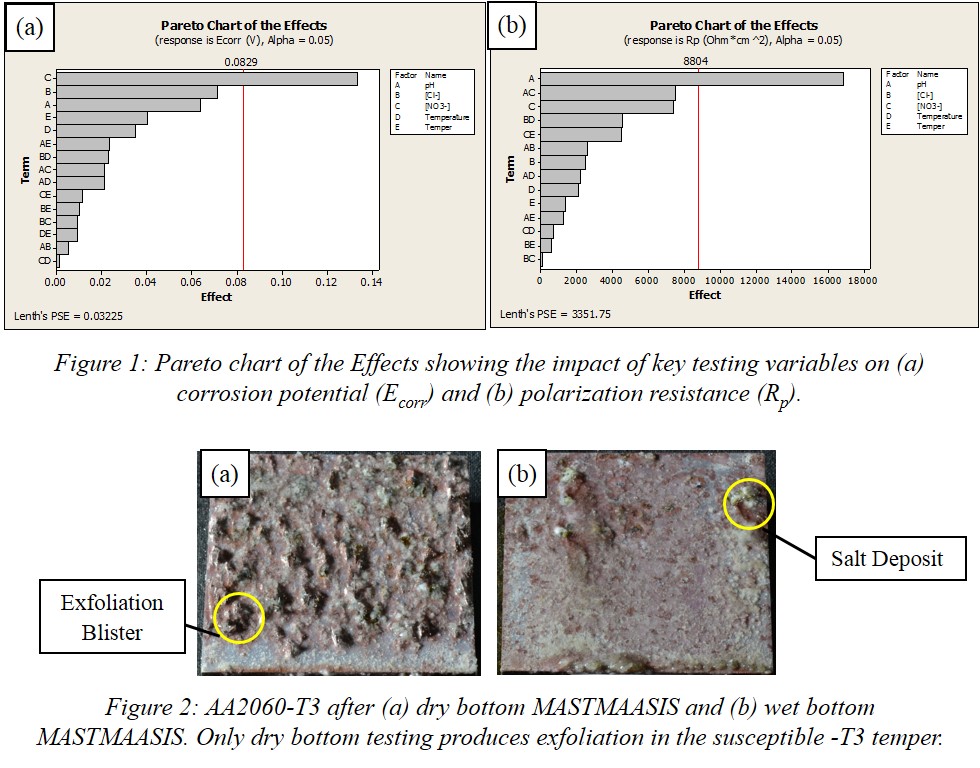