Fuel cell systems can be used as a power supply in autonomous underwater vehicles (AUVs). These typically battery driven small submarines are intended to be used by the German navy to map the seabed in ports in search for objects like mines and shipwrecks.

By using a fuel cell (FC) system, it is possible to extend the endurance of the AUV. The fuel cell system reloads the battery while it is powering the AUV’s motor and payload. Another advantage is that power (stack size) and energy content (gas tank size) of the fuel cell system can be scaled independently.

In the past several projects dealt with the integration of a PEMFC system in AUVs [1]. The challenges for under water FC systems arise mainly from limited mass transfer with the environment, i.e. the surrounding seawater.

Due to small amounts of inert gases in the hydrogen and oxygen gas supply an accumulation of inert gas in the system will occur over time. These inert gases diffuse through the membrane and accumulate at the anode which leads to local fuel starvation. A balance between diffusion to and from the anode will cause, in combination with the hydrogen depletion by reaction, an inert gas blanketing of a certain anode area. [2]

Degradation of the fuel cell is affected by the inert gas blanketing on the anode, as it may lead to local fuel starvation and higher carbon corrosion. [3]

In this study, we present measurements at different AUV related working conditions of a fuel cell stack from UBzM (Ulm, Germany) conducted with a Greenlight Innovation G400 test bench.

As shown in Fig. 2, the influence of inert gas (nitrogen) at the cathode on the stack performance is investigated. With high nitrogen concentration at the cathode, fuel starvation at the anode is supported which leads to a cell voltage drop. Experimental procedures to prevent the stack from failing like setting a pressure difference between anode and cathode or a cathodic over-stoichiometry, will be presented and their influence on the inert gas balance in the stack will be evaluated. Additionally it is planned to validate these results by testing an assembled fuel cell system under the same conditions.

The obtained results from the stack will be compared to single cell tests of similar membrane electrode assemblies supplied by UBzM.

Additionally the single cell tests will be complemented with gas analytics to obtain more accurate data on the nitrogen diffusion through the membrane and to further understand negative effects like carbon corrosion at dead ended anode conditions.

Fig. 2: Measurement of the UBzM stack with different Vol.-% of nitrogen on the cathode. 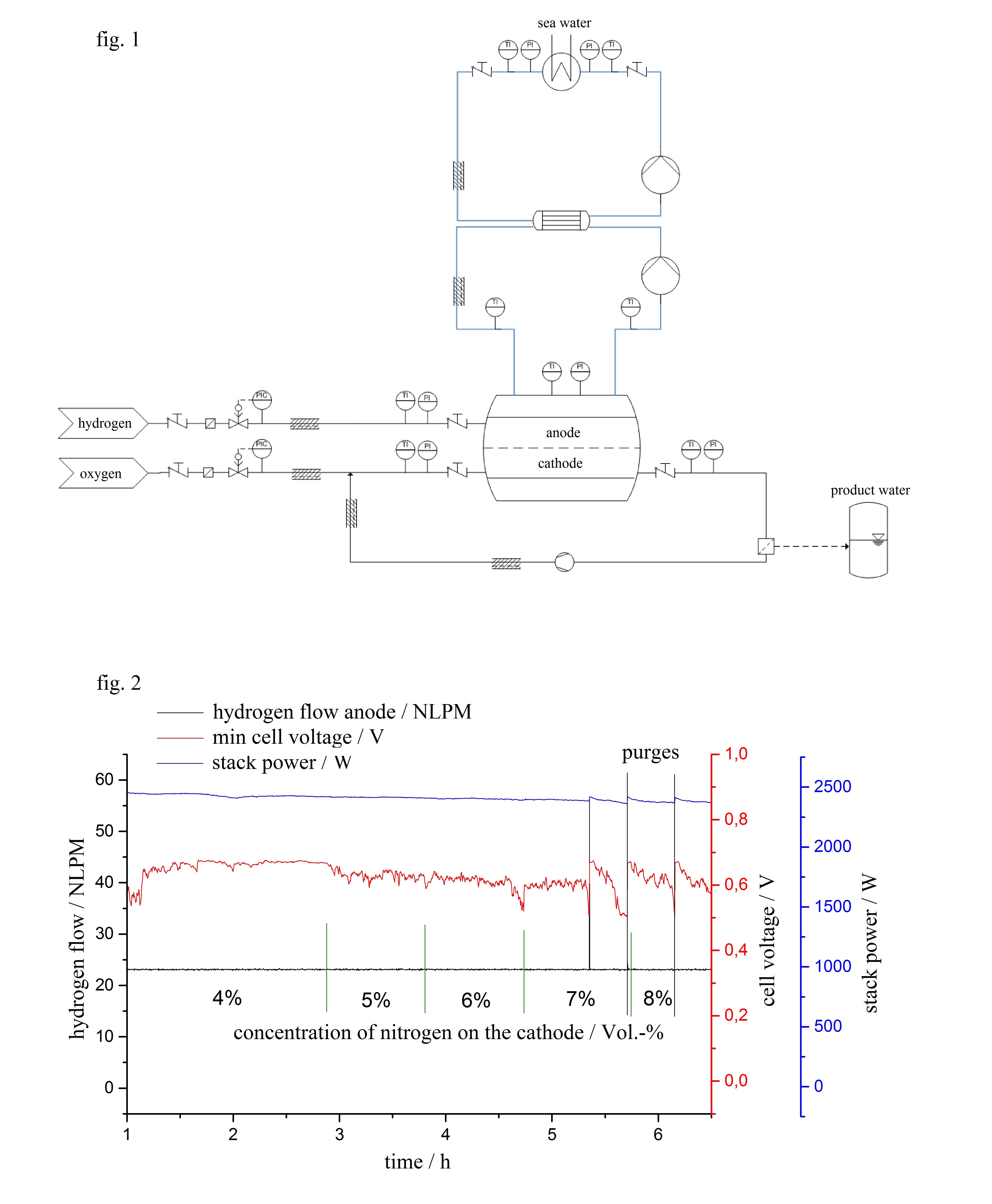