The National Aeronautics and Space

Administration (NASA) has led a thrust for the

(RFCs) to be used as energy storage for space-based

of the program has been to develop an RFC system

capable of a round trip efficiency of 64%. The focus at

the Jet Propulsion Laboratory (JPL) in RFC research has

assemblies (MEAs) for both the fuel cell and the

In a RFC system, energy storage is achieved via

the electrolysis of water to hydrogen and oxygen gases

during the charge phase. Consumption of the hydrogen

and oxygen gases then occurs during the discharge phase,

with the subsequent generation of water. For space

applications, the energy for the electrolysis of water will

be supplied via solar or nuclear power. The power

delivered during the discharge of the RFC system can be

operating on the moon, near-Earth asteroids or Mars.

Such a system could also be used for load balancing in

both space and terrestrial applications.

This paper will discuss fuel cell MEAs that have

been developed for a future NASA regenerative fuel cell

that will feature RFC-based energy storage systems will

The current-voltage polarization of two MEAs

are shown in Figure 1. To achieve high voltage

efficiencies, the MEAs will be expected to operate at

MEA will operate with reactants at a balance pressure of

designed to operate in a non-flow-through stack. The

that operate with a reactant feed rate of approximately 3x

As shown in Figure 1, the polarization for the

mA/cm2, respectively. The polarization of the NASAJPL

MEA is approximately 80 mV greater than the

commercially available MEA at a current density of 200

mA/cm2. The voltage efficiency for the JPL-NASA MEA

efficiency, the fuel cell MEA will need to operate at

approximately 73% voltage efficiency. It is envisioned

that MEA operation at current densities above 1 A/cm2

would be for short periods (< 1 hour) for NASA

The short-term durability studies for the NASAJPL

MEA is shown as Figure 2. The MEA operated at an

The initial voltage for the MEA is reported to be greater

hours of operation. The initial voltage is recoverable after

current cycling as shown at 243 hours of operation. The

cell degradation is reported to be approximately 7 μVolts

after more than 1000 hours of operation. The degradation

is, in part, attributed to test hardware. The minimum

MEA voltage efficiency is approximately 73% for the

duration of the test. Future work will investigate the

integration of the NASA-JPL MEA in NASA RFC

The work presented here was carried out at the Jet

for the National Aeronautics and Space Administration.

“Analysis of the Performance of Nafion-Based Hydrogen- 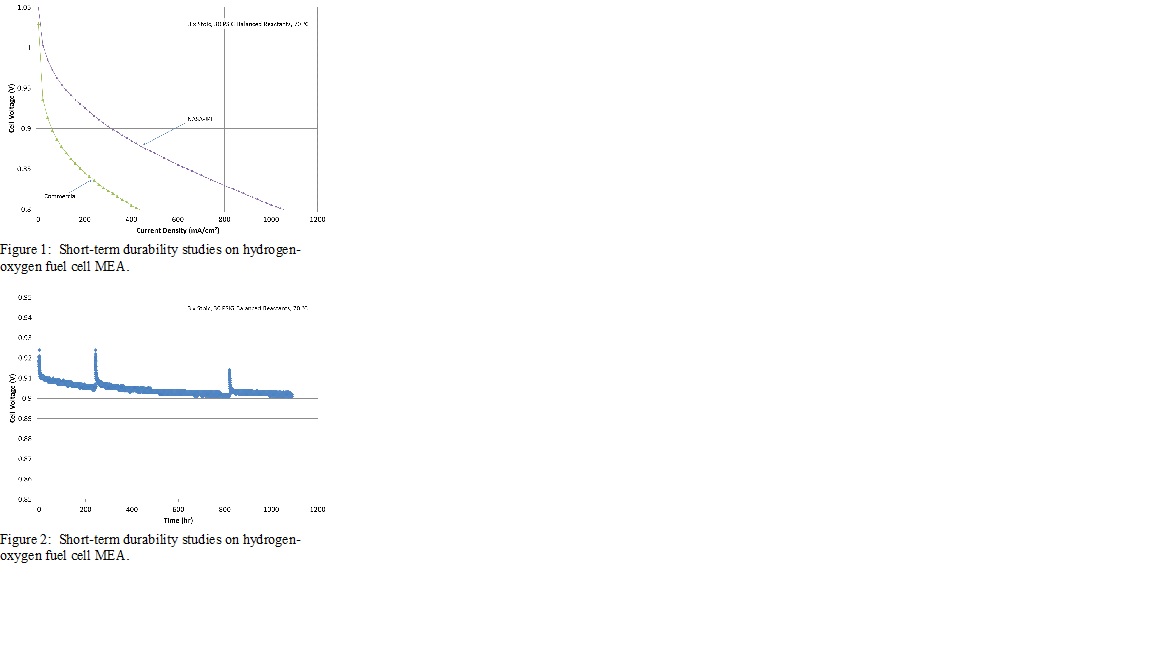