West Hall 1 (Phoenix Convention Center)
A. R. Crothers (Lawrence Berkeley National Laboratory, University of California, Berkeley), C. J. Radke (University of California, Berkeley), and A. Z. Weber (Lawrence Berkeley National Laboratory)
To optimize polymer-electrolyte-fuel-cell performance, it is critical to improve transport properties of the polymer membrane. The typical fuel-cell membrane is a perfluorosulfonic-acid ionomer that consists of a hydrophobic backbone with hydrophilic side chains terminated by a sulfonic acid group. The polymer phase separates into hydrophilic domains that are on the order of nanometers and enables water and proton transport around the surrounding hydrophobic matrix that provides structural integrity. Although there have been concerted efforts to use molecular-level theory and simulations to understand ion and water transport inside a single pore, there is a need to develop a robust multiscale methodology to bridge molecular descriptors through mesoscale structures to macroscopic properties. In this poster, we present a methodology for such an approach.

Building on previous multiscale modeling efforts1, we use a resistor-network paradigm to describe ionomers as a network of conductive nodes and throats. The effective network resistance is a function of the connectivity of the network and transport resistance between each neighboring node. We use common imaging methods to extract the network geometry from direct imaging of the ionomer2. Molecular theory and simulations are used to describe and calculate the proton conductivity in throats as a function of size. Kirchhoff's circuit laws are applied on each node in the system and the effective resistance across the membrane is determined for ion conduction. Once designed, a poroelastic model is used to change node and throat sizes and subsequent network connectivity with water content and swelling.

This work was funded by the Assistant Secretary for Energy Efficiency and Renewable Energy, Fuel Cell Technologies Office, of the U. S. Department of Energy under contract number DE-AC02-05CH11231 and by a National Science Foundation Graduate Research Fellowship under Grant No. DGE 1106400

Figure 1. 3D projection of pore-network generated from skeletonization of cryo-TEM tomography image of Nafion ionomer. The green cylinders show throats of the hydrophilic network connecting nodes, shown as red balls. The background is a cutaway of the network where blue is the hydrophilic domain and black the hydrophobic backbone. 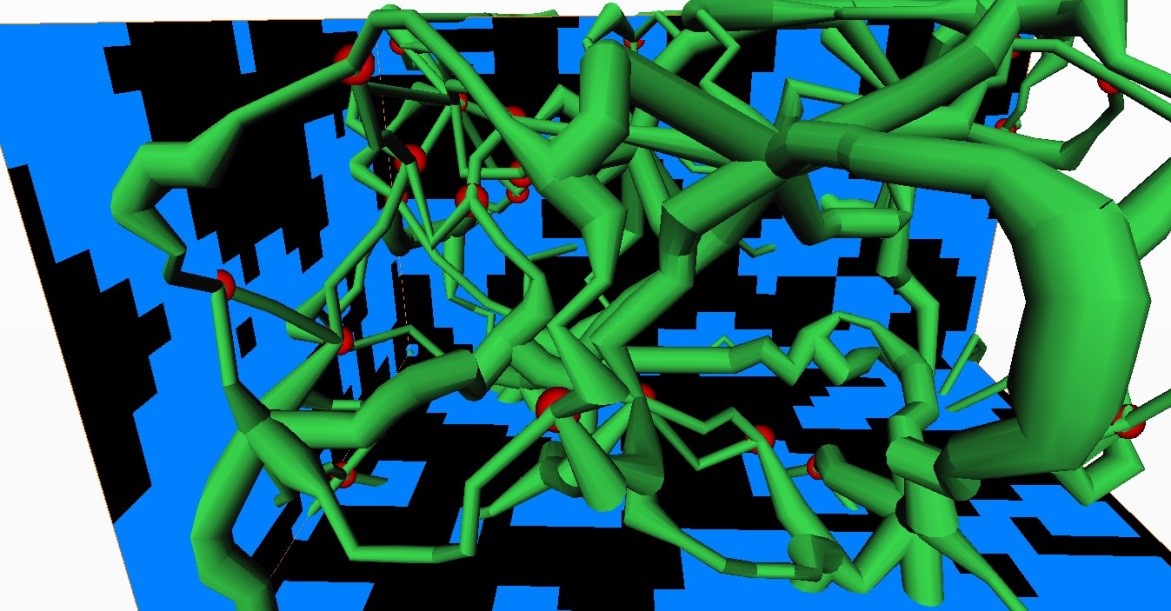