West Hall 1 (Phoenix Convention Center)
P. Dudenas (University of California, Berkeley, Lawrence Berkeley National Laboratory), A. Kusoglu (Lawrence Berkeley National Laboratory), and A. Z. Weber (Lawrence Berkeley National Laboratory)
Perfluorosulfonic-acid (PFSA) are a class of ion-conducting polymers (ionomers) that are in polymer-electrolyte fuel cells (PEFCs), redox flow batteries (RFBs), solar-fuel generators, and related electrochemical technologies. The prototypical PFSA, Nafion®, is commonly used due to its high conductivity, wide electrochemical window, and good thermo-mechanical and chemical stability. Within the porous electrodes or catalyst layers of these devices, PFSA exists as thin films, typically 2 to 50 nm, which act as a binder and is the electrolyte that carries ionic charge carriers. Previous work has demonstrated that PFSA ionomer thin films exhibit behavior that is different from their bulk form due to confinement driven changes1,2. To date, such studies have only looked at homogenous substrates of materials relevant to the aforementioned devices including smooth platinum, gold, silicon, and carbon substrates. Figure 1 shows Grazed Incidence Small Angle X-ray Scattering (GISAXS) profiles of Nafion® thin films on these substrates. The angular dependence of the ionomer peak intensity indicates anisotropy in the morphology on platinum and gold compared to carbon and silicon. How morphological anisotropies persist through the heterogeneous catalyst layer and the effect on the structure/function relationship has yet to be studied.

Building off these previous results, we extend the study of ionomer thin films to heterogeneous substrates that begin to more closely resemble the complex nature of catalyst layers. Using standard nanofabrication techniques, mixed substrate interfaces are manufactured to study the substrate/film interaction and the propagation of interactions. Ionomer is spin-cast onto the substrates under various processing conditions. GISAXS is performed to determine the morphology under varying relative humidity and temperature. The morphological changes are correlated with swelling studies to begin to elucidate the structure/function/performance relationship. Varying the distance between interfaces and film thickness, we determine how far the interfacial effects propagate into either side of the heterogeneous substrate domains.

Acknowledgements
This work was funded by the Assistant Secretary for Energy Efficiency and Renewable Energy, Fuel Cell Technologies Office, of the U. S. Department of Energy under contract number DE-AC02-05CH11231. The work utilizes beamline 7.3.3 at the Advanced Light Source, which is funded by DOE Basic Energy Sciences. We also acknowledge helpful discussions with Bryan McCloskey at University of California, Berkeley.

Figure 1. Angle dependence of ionomer-peak intensity from GISAXS data for Nafion thin-films on different substrates. The inset shows the GISAXS profile for the Nafion on Pt sample and the integration angle. The figure clearly shows the anisotropy for the metallic substrates compared to the Si and carbon ones2. 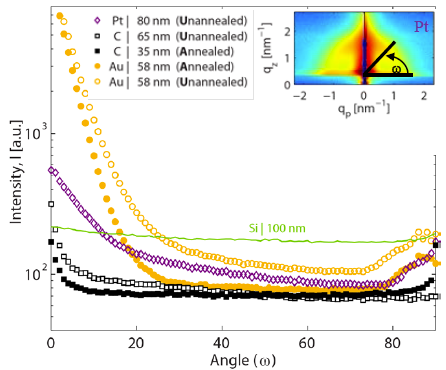