In this study, we investigated the durability of an aromatic block copolymer membrane (sulfonated poly ketone block copolymer: SPK-bl-12) and PFSA membrane (Nafion NRE 211), both 25 µm thick, under accelerated operating conditions appropriate for actual fuel cell vehicles. The durability of open circuit voltage (OCV) was evaluated under hydrogen (76% RH) and air (86% RH) at 90 oC and 160 kPaG pressure. In addition, we examined the effects of a practical startup process through a combined durability test (startup and OCV) for the membranes. For the practical startup process, first, air was supplied to the anode and cathode for 90 seconds, and then H2 gas was introduced to the anode for 90 seconds. Finally, N2 gas was supplied to the anode and cathode for 60 seconds. These three steps were defined as one cycle. The durability of the membrane electrode assemblies (MEAs) prepared with SPK-bl-1 and NRE 211 were evaluated for 1000 cycles. After the durability evaluation, the post-test MEAs were analyzed via gel permeation chromatography (GPC), nuclear magnetic resonance (NMR), and cross-sectional scanning electron microscopy (SEM). These results were compared with those of the initial MEAs.

Figure 1 shows the OCV evaluation for the cells using SPK-bl-1 and NRE211 membranes. The durability of the MEA using SPK-bl-1 was superior to that using NRE211. This may be attributed to the suppression of the decomposition of the membrane, because the gas permeability of the SPK-bl-1 was one order of magnitude lower than that of NRE 211, which would reduce the production of oxidative radical species from hydrogen peroxide generated on the anode side. However, the cell potentials of both membranes decreased significantly in the OCV evaluation combined with startup cycles, as seen in Figure 1 (open symbols). This indicates that the startup cycles accelerated the degradation of the membranes. The GPC and NMR spectra show that the weight-averaged molecular weight of SPK-bl-1 decreased by ca. 25% during the durability tests, and the hydrophilic blocks of the membrane were partially decomposed. These analyses indicate that the SPK-bl-1 membrane was likely to decompose in the hydrophilic blocks.

Figure 2 shows SEM/ electron probe microanalysis (EPMA) images of the MEAs using SPK-bl-1 before and after the durability evaluation. The sulfur content decreased near the anode side in the membrane, and Pt particles were deposited at the interface between the anode catalyst layer and the membrane (faint red line). To investigate the factors involved in accelerated aging in more detail, we used Pd/CB as the anode catalyst instead of Pt/CB and analyzed the distribution of Pt in the MEA. Figure 3 shows the ZC image and energy-dispersive X-ray (EDX) spectrometric analysis of the MEA using SPK-bl-1 after 1000 cycles of startup evaluation. The Pt particles in the cathode were dissolved into the membrane and were re-precipitated along with the Pd particles in the membrane. These analyses may suggest the possibilities that (1) the Pt ions dissolved from the cathode migrated within the membrane toward the anode, (2) even reaching the anode/membrane interface, and (3) then the Pt ions were reduced by permeated hydrogen.

In addition, we investigated the distribution of Pt particle size during the durability evaluation (Figure 4). The Pt particle size of the cathode catalyst (Pt/GCB-HT) decreased after the startup evaluation, whereas that of the anode catalyst (Pt/CB) increased. The former result was in accordance with that in our previous research3, but the latter might be ascribed to the Pt deposition from the anode catalyst layer possibly because hydrogen and air supplied to the anode during the startup evaluation caused the anode potential to vary between 0 V and 1.0 V vs. RHE.

This research was supported by funds for the “Research on Nanotechnology for High Performance Fuel Cells” (HiPer-FC) project from the New Energy and Industrial Technology Development Organization (NEDO) of Japan. 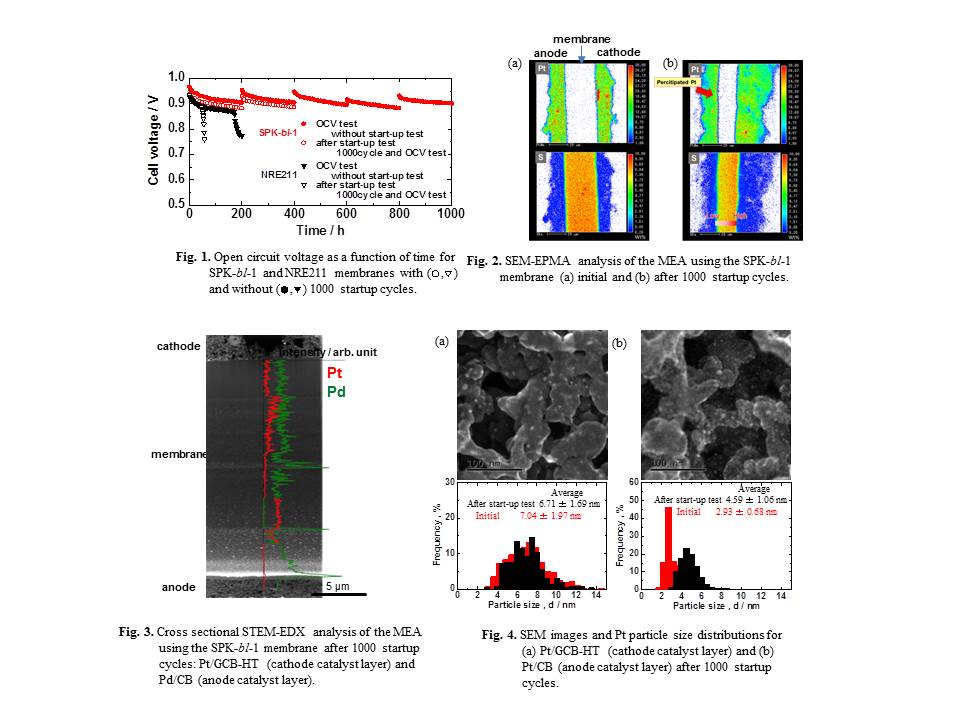