102-A (Phoenix Convention Center)
M. L. C. Lim, E. Trueman (NSWC Carderock Division), J. R. Scully (University of Virginia), and R. G. Kelly (University of Virginia)
The high strength-to-weight ratios, excellent uniform corrosion resistance, and weldability of Al-Mg alloys make them lightweight substitutes for steel in marine structures.  The vulnerability of these alloys becomes apparent after extended periods in service environments, making the alloys sensitized due to the preferential grain boundary precipitation of the more anodic β-phase (Al3Mg2), satisfying an electrochemical condition for an intergranular corrosion (IGC) path.  The increasing body of research on IGC of AA5083, resulted in several established characteristics such as the IGC spreading potential, the IGC propagation threshold potential, and the critical IGC propagation current density.[1-3]  However, the roles of these parameters on IGC stability remain unexplored.

The general consensus definition for stable localized corrosion of depassivated acidic sites calls for steady state anodic dissolution in the presence of a critical chemistry, an appropriate potential inside the corrosion cavity, or the combination of both.[4-6]  There are two known electrochemical thresholds for localized corrosion stability to determine whether these conditions are sustained: the repassivation potential, Erp, and Galvele's pit stability product, (i*x)crit.[4, 6]  When the potential is sustained to be more positive than Erp, or when the product of the dissolution current density and propagation depth exceeds a critical value, localized corrosion can propagate stably.  Although these stability criteria have been utilized in pit growth studies across a number of metal systems, there are currently no equivalent data for Al-Mg alloys.  An added complication is the heterogeneous grain boundary microstructure consisting of α and β phases.  Thus, the objective of this work is to develop a quantitative understanding of the IGC propagation stability criteria for sensitized Al-Mg alloys.

The pit stability products, i*x, were determined for 99.99% Mg, and sensitized and unsensitized AA5083-H131 wires of 127, and 112 µm diameter, respectively.  A series of potentiostatic holds were conducted on lead-in-pencil electrodes exposed to 0.6 M NaCl, pH 8.3.  Artificial pits of controlled depths were generated by polarizing the electrodes to 1 VSCE for 1200 s.  The potential was then rapidly scanned down and held at a lower potential for 100 s.  The i*x at a given potential (Figure 1) is the product of the actual pit depth and the respective average current densities at each potential.  These findings showed the influence of both alloying and sensitization on i*x, which could be attributed to the solution saturation at the pit bottom.  To investigate the effect of these pit solutions, polarization scans were conducted on composite α-phase and β-phase in electrolytes of varying compositions of AlCl3 and MgCl2.  Potentiodynamic scans were conducted following artificial pit generation in electrolytes of varying AlCl3 and MgCl2saturations to measure pit bottom dissolution kinetics and to identify critical pit chemistry.  Select experiments were also conducted on bulk AA5083-H131 exposed to the critical chemistry.

Erp measurements were conducted on unsensitized and sensitized AA5083-H131 in 0.6 M NaCl, pH 8.3.  For wire specimens, the method of Srinivasan, et al.[7] was employed wherein lead-in-pencil electrodes were held at a potential above the pitting potential to generate artificial pits of certain depths, followed by a downward potentiodynamic scan at 0.5 mV/s.  To ensure that no uniform corrosion occurred in bulk specimens, IGC were generated at the spreading potential (-0.73 VSCE), followed by the same downward potentiodynamic scan.  The Erp was identified at which the current density was just below 250 µA/cm2.  The Erp for AA5083-H131 was determined as the plateau potential on a potential versus accumulated charge density plot.  To verify the applicability of Erpas a stability criterion, current decay measurements and long-term potentiostatic holds were conducted.

The correlation between the two stability criteria presented aids in formulating a physical mechanism for stable IGC propagation in Al-Mg alloys in the context of threshold potential, critical applied current density, and sensitization.  Additionally, this knowledge will provide information for corrosion mitigation strategies in this alloy class. 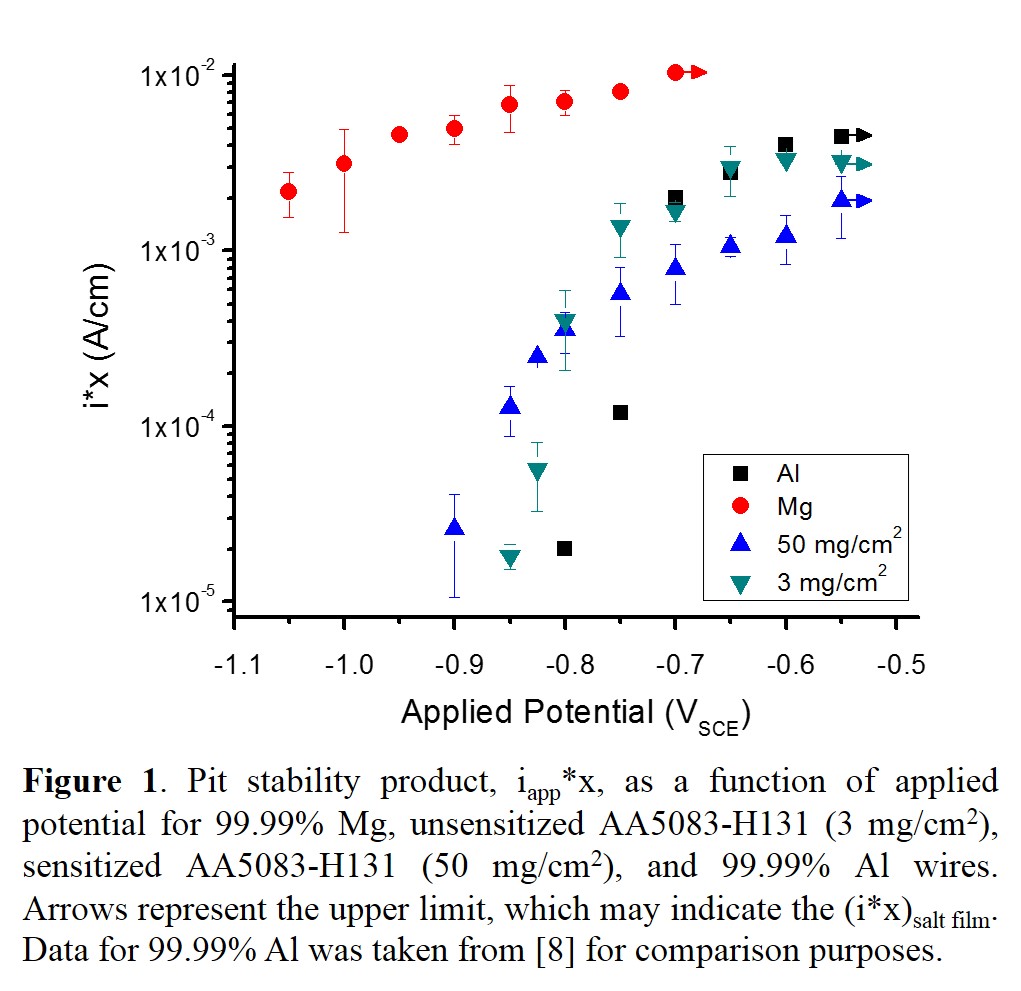