For stable Al pit growth, it is widely accepted   that local pit chemistry and environment are critical; or a critical value of the stability product (x.i), where x the pit depth, and i the current density, must be maintained for pit survival [2-6].

In this work, we propose to employ a single Al wire (~100um dia.) mounted in epoxy with different initial pit depth d, which is produced by anodic dissolution, for singe Al corrosion pit growth by coupling with a large Al foil ring as its remote cathode through a zero resistance ammeter (ZRA), as schematically shown in Fig.1. The purpose of this study is, in combined with in-situ scanning vibrating electrode technique (SVET, Fig. 2), to determine quantitatively whether the single Al corrosion pit growth follows a depth-dependent growth model as often predicted.

This work was performed under United Technologies Corporate R&D funding.

Fig. 1 Schematic geometry of single al corrosion pit formed by an Al wire mounted in epoxy, by coupling with a large Al foil ring as its remote cathode through a zero resistance ammeter (ZRA). 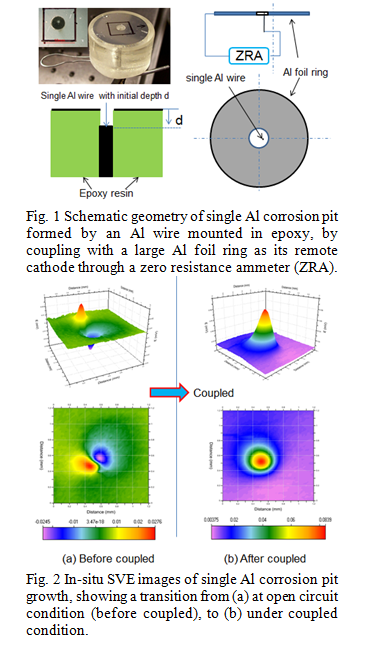