102-A (Phoenix Convention Center)
B. Volaric, P. Rodic (Jozef Stefan Institute), and I. Milosev (Jozef Stefan Institute)
Aluminum alloy 7075-T6 is due to good physical and chemical properties commonly used material in different applications in industry. To protect the metal surface against corrosion various coatings were often applied. Some of the components used for their production include toxic organic solvents harmful to the environment. Chromate conversion coatings have been for many decades extremely effective and easy way to improve corrosion resistance on aluminum alloys. It was based on the CrOOH matrix containing islands of Cr6+ and connections Cr3+-O-Cr6+ enabling a self-healing process and resulting in the protection of the material in different corrosive media [1]. Due to toxicity and cancerogenicity of chromate these conversion coatings are now banned or largely restricted in European Union, USA and other parts of the world. For that reason various alternatives are investigated including various chromate-free conversion coatings, e.g. Ti- and Zr- based and rare earth conversion coatings, sol-gel coatings, electro-polymerized coatings, plasma processes, etc. Rare earth compounds including immersion coatings, both accelerated and non-accelerated are among most promising options [2,3].

Alternative approaches should be environmentally acceptable and offer high efficiency of corrosion protection. Lanthanide compounds are environmentally friendly, their price is reasonable and are available in natural sources. Among lanthanide salts, especially cerium has been identified. Cerium is the most active and the only lanthanide, which can be oxidized in a stable salt with a higher oxidization state. The mechanism of surface protection includes the formation of a protective layer of hydroxide and/or oxide and precipitation as insoluble CeO2 [3]. This reaction is carried out on metal inclusions (Zn, Cu, Mg), which act as a cathode sites.

While rare earth compounds have been used in numerous studies, there have been relatively few reports on the effect of mixtures. Instead using individual inhibitors, a mixture of inhibitors may achieve an enhanced effect. Binary mixture of Ce and La chlorides was used [4]. It has been recently shown using a combinatorial matrix of four rare earth chlorides that mixtures can be used to achieve synergistic effects for corrosion inhibition [5]. Four types of rare earth (Ce, Pr, La, Nd) chlorides were used as non-accelerated inhibitor coatings [5]. Another approach using conversion treatment at elevated temperature without acceleration showed that temperature promotes the conversion to more stable compounds [6].

The aim of this study was to investigate various lanthanide salts and their mixtures as potential corrosion inhibitors of high-strength aluminum alloy AA7075-T6 in chloride solution.

Two approaches are taken – non-accelerated immersion and accelerated conversion coatings. Various types of Ce and La salts were used. Chlorides and nitrates were tested both as individual inhibitors and as their mixtures in two different ratios (1:3 and 3:1).

The electrochemical measurements were used to analyze the efficiency of corrosion protection and SEM/EDS and 3-D profilometry to analyze the morphology, composition and topography of treated surfaces. Although all inhibitors protect primarily intermetallic sites their efficiency and morphology and composition of compounds formed differed markedly. After immersion in solution containing a mixture of inhibitors the morphology of product contained features of both types of inhibitors. EDS analysis identified the presence of both rare earth cations. An examples is given in Figure 1 for the mixture of Ce and La chlorides (Fig. 1). Results confirm the synergistic effects of both types of salts on the corrosion inhibition of aluminum alloy.

Acknowledgments: The financial support by the Slovenian Research Agency is appreciated (grant No. P2-0393). 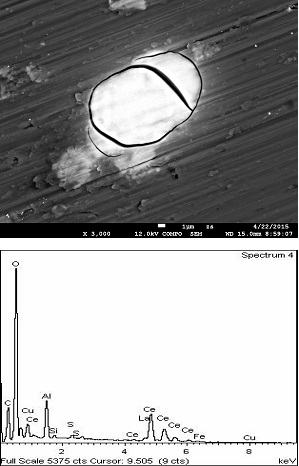