101-B (Phoenix Convention Center)
M. Schoenleber (IAM-WET, Karlsruhe Institute of Technology (KIT)) and E. Ivers-Tiffée (IAM-WET, Karlsruhe Institute of Technology (KIT))
By analyzing the Distribution Function of Relaxation Times (DRT) of a measured impedance spectrum one can separate different loss processes and thereby study which physical mechanisms contribute how strongly to the overall polarization resistance. The method is based on the idea that certain parts of an impedance spectrum can be represented by a serial connection of parallel RC-Elements [1].
The DRT has been successfully used for analyzing the polarization processes taking place in Solid Oxide Fuel Cells (SOFC) as well as in Li-Ion batteries [2][3]. For the latter however, the analysis had to be limited: Due to the structure of the underlying modelling approach using parallel RC-elements, only the non-capacitive region of the impedance could be analyzed using the DRT. Accordingly, information contained within the capacitive region could not be utilized optimally so far.
For analyzing capacitive characteristics we therefore propose to adapt the concept of DRT to capacitive systems yielding a Distribution Function of Differential Capacities (DDC).
By physical means this function states how much load is intercalated how fast into an electrode after applying a voltage step. Figure 1 further exemplifies the concept by showing
(i) a simple model system consisting of three intercalation pathways.
(ii) the non-measurable intercalation currents over time exhibiting the different time constants with which the partial capacity of different-sized particles can be utilized.
(iii) the according shape of the DDC, which allows to quantify time-constants and capacity contributions of different-sized particles from simple impedance measurements.
Hence, using the proposed DDC allows to easily obtain information regarding an electrodes capacitive characteristics and can therefore serve as a supporting tool for custom-tailoring modern electrode microstructures.
A detailed motivation and derivation of the new method will be given and first results will be shown. 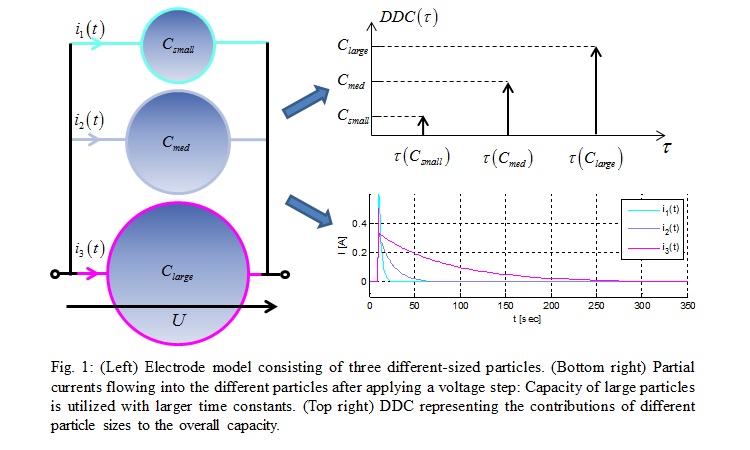