101-B (Phoenix Convention Center)
G. Inoue (Kyoto University)
In order to improve the performance of Lithium ion secondary battery (LiB), it is very important to understanding the internal transport phenomena under high rate condition to increase power density. In my previous study, I focused on the actual porous electrode structure, and the Li ion and electron conductivity was evaluated by the effective conductive path with the actual reconstruction electrode structure [1], [2]. However, the effect of volume expansion of charge-discharge state is not been understood enough. In this study, I examined the new model with structure change based on the actual porous electrode structure, and the relationship between structural change and battery performance was considered. Actual Graphite anode and LiCoO2 cathode electrode structure were reconstructed by FIB-SEM, and the reaction and mass transfer in these reconstructed electrode structure and simulated separator structure were simulated by multi-block method [3] which is the method of coarse graining to keep the information of heterogeneous structure. Li concentration and potential distribution in active material (AM) and electrolyte (EL) were calculated with Butler-Volmer equation as the boundary condition of the interface between AM and EL. it was assumed that temperature is constant, the formation of SEI is ignored, binder phase inhibit ionic transfer. The discharge performance was calculated with 1M LiPF6－EC/DEC (1:1) and the condition reported previous research[4]. Figure 1 shows the cell structure, current density distribution and Li concentration distribution in AM. The current density near LCO collector became lower because of the lack of Li ion caused by binder migration. In addition, the simulation results were compared with experimental results which were obtained by coin cell with same electrode structure. These results were almost equal to each other. Furthermore, the effect of volume expansion was included in this previous model. Especially, the effect of electrolyte convection caused by the change of porosity was examined. Figure 2 shows the simulation results of the discharge-distribution with volume expansion. From this result, it was found that the effect of convention cannot be ignored in the case of high expansion volume ratio (more than e=2) 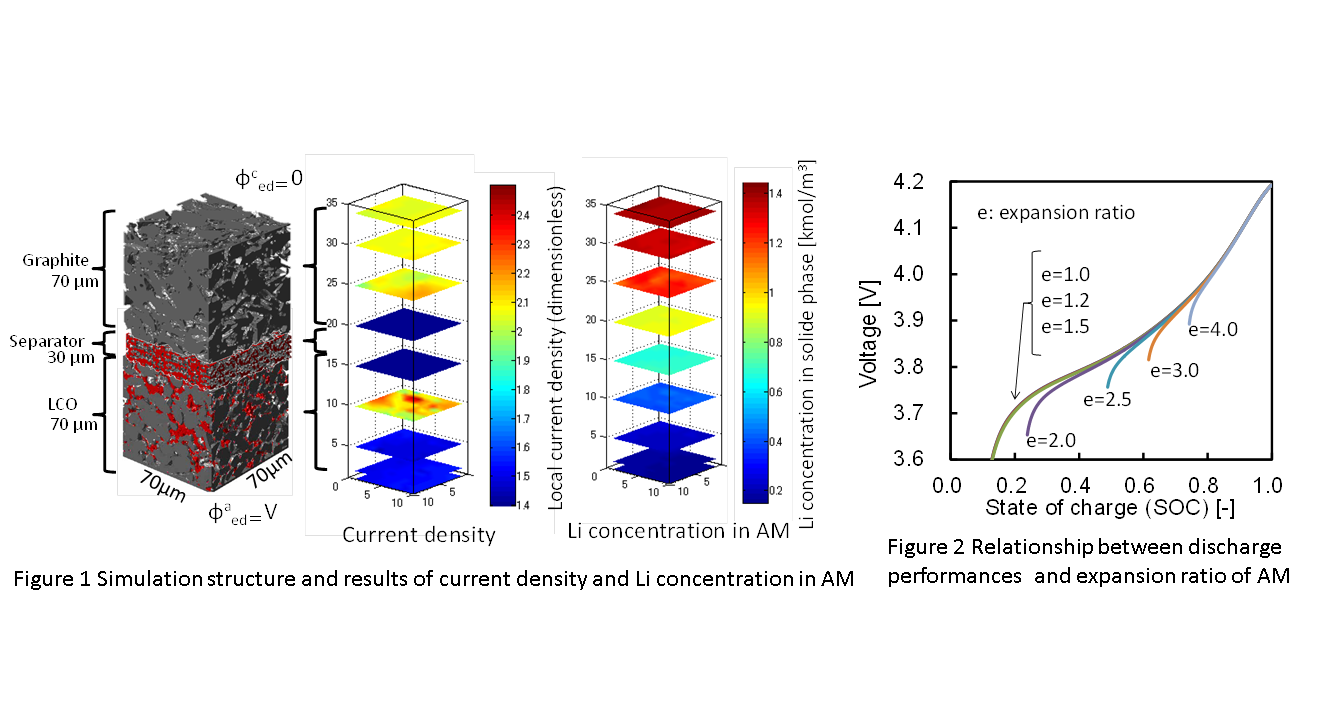