West Hall 1 (Phoenix Convention Center)
M. Iwami (Kyushu university), D. Horiguchi, Z. Noda (Kyushu University), A. Hayashi (Kyushu University), and K. Sasaki (Int. Res. Center for Hydrogen Energy, Kyushu University)
Pt nanoparticles supported on carbon black (Pt/C) are widely used as polymer electrolyte fuel cell (PEFC) electrocatalysts. However, under the high potential at the cathode, carbon corrosion can occur to decrease electrocatalyst performance. In addition, fuel starvation can also cause carbon corrosion on the anode side [1]. Therefore, alternative electrocatalyst support material is desired to be developed to replace the conventional carbon black support. Metal oxide is a promising candidate. Titanium oxide (TiO2) possesses high stability in the strongly-acidic fuel cell environment on both the anode side and the cathode side. Pt/TiO2 electrocatalyst has high durability, but the initial electrochemical activity is still much lower than Pt/C, partly due to poor electronic conductivity of TiO2 [2]. To increase the initial activity of Pt/TiO2, we dope TiO2 with a small amount of Nb ions [3], and we apply conductive fillers to further improve electrical conduction in the electrocatalysts. The aim of this study is to develop TiO2-based electrocatalysts with both high durability and high electrochemical activity.

Vapor grown carbon fiber (VGCF-H) were used as conductive fillers. Ti0.95Nb0.05O2 was prepared on the VGCF-H (Ti0.95Nb0.05O2/VGCF-H) by the sol-gel process. Colloidal process and Pt(acac)2 process were applied to impregnate Pt nanoparticles to obtain the electrocatalyst, denoted as Pt/Ti0.95Nb0.05O2/VGCF-H.

BET specific surface area of TiO2/VGCF-H was measured for different TiO2 loadings on the conductive fillers. We then made half-cell measurements to evaluate electrochemical activities of these electrocatalysts. Electrochemical surface area (ECSA) was measured by cyclic voltammetry (CV), and oxidation reduction reaction (ORR) activity was derived from kinetically controlled current density (ik) in the rotating disk electrode (RDE) measurement.

Figure 1 shows the BET specific surface area of TiO2/VGCF-H for different TiO2 loadings. The surface area becomes larger with increasing TiO2 loading. On the other hand, agglomeration of TiO2 particles on VGCF-H becomes obvious so that the electronic conducting passway through TiO2 becomes longer, leading to a decrease in electrochemical performance. Figure 2 shows FE-SEM images of Pt/Ti0.95Nb0.05O2/VGCF-H prepared by the colloidal process and the Pt(acac)2 process. These micrographs clearly show the selective impregnation of Pt nanoparticles on TiO2 rather than VGCF-H in the colloidal process. However, there are some Pt nanoparticles locating directly on the VGCF-H after the Pt(acac)2 process, partly because of the difference in the solvent of the inorganic colloidal process and the organic Pt(acac)2process. Details on their electrochemical activities are presented at the Symposium. 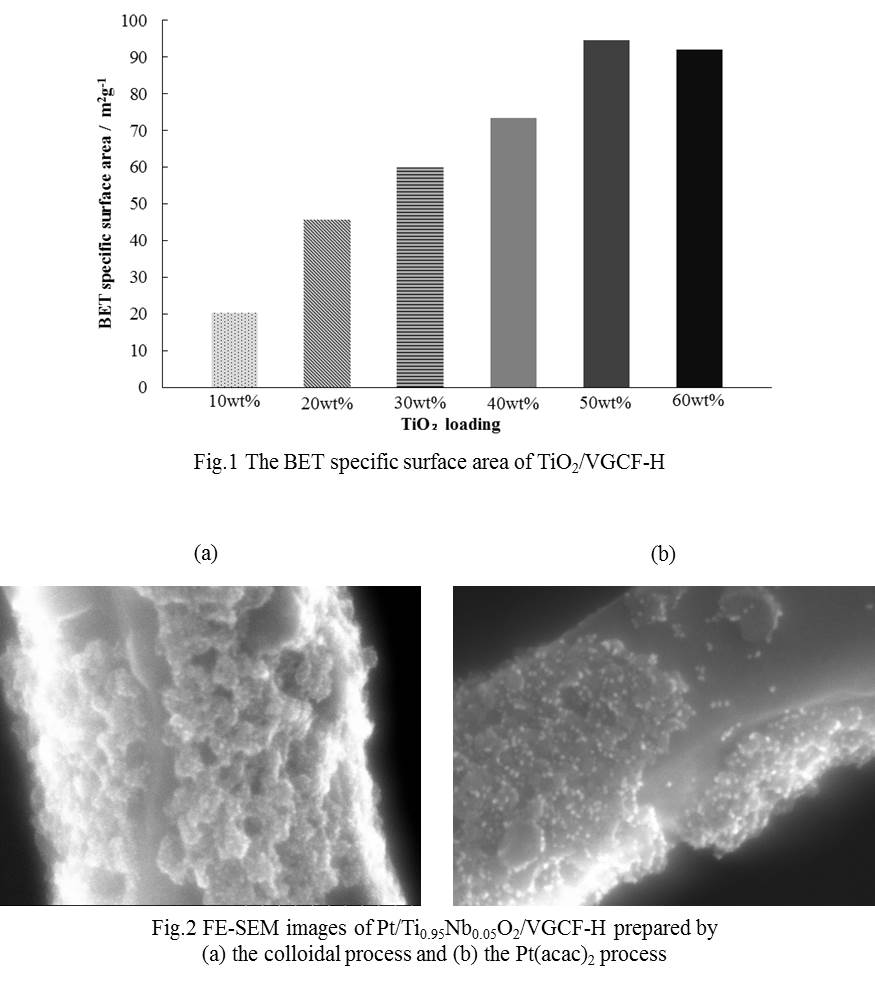