West Hall 1 (Phoenix Convention Center)
D. Horiguchi, Z. Noda (Kyushu University), A. Hayashi (Kyushu University), and K. Sasaki (Int. Res. Center for Hydrogen Energy, Kyushu University)
For polymer electrolyte fuel cells (PEFCs), the electrocatalysts with Pt nano-particles homogeneously dispersed on carbon black (Pt/C) are widely used. However, during the fuel cell start-stop cycles, the potential of the cathode can reach up to ca. 1.5V, resulting in a severe carbon corrosion. Tin oxide (SnO2) has been studied as an alternative support material because of its thermochemical stability. Takasaki et al. [1] have demonstrated negligible degradation within 60,000 cycles in a half-cell test, indicating that Pt/SnO2 electrocatalyst can exhibit an excellent voltage cycle durability. However, relatively low electrical conductivity in such semiconducting oxides often leads to poor cell performance. In the previous PEFC Symposium in Cancun, we reported higher activity of Pt/SnO2 electrocatalysts on conductive fillers acting as the backbones of the electrocatalysts [2]. We selected vapor grown carbon fibers (VGCF) and acetylene black (AB) as possible conductive fillers, and Pt/SnO2/VGCF and Pt/SnO2/AB were synthesized. Their electrochemical surface area (ECSA) was about three times as large as that of Pt/SnO2. However, they are slightly inferior to the ECSA of Pt/C. Here, we aim to improve the electrochemical activity of Pt/SnO2electrocatalysts on conductive fillers approaching that of the state-of-the-art Pt/C electrocatalyst.

First, we have reexamined the procedure for the preparation of SnO2. Previously, SnO2/VGCF and SnO2/AB were synthesized via the ammonia co-precipitation. In this process, due to heat treatment required at a high temperature (e.g. 600oC), the particles of SnO2 were agglomerated. We thus introduced a homogeneous precipitation procedure using microwaves which requires no heat treatment at a high temperature. Consequently, the BET specific surface area of SnO2becomes one order of magnitude larger.

Second, we have adjusted the loading of SnO2 for the conductive fillers. The BET specific surface area of SnO2/VGCF becomes larger with increasing SnO2 loading. However, their electrochemical activity decreased for too high SnO2 loading, due to its lower electrical conductivity. In addition, the catalytic activity was improved by heat treatment to 200 or 400oC. The details on the catalytic activity increase by optimizing SnO2loading and heat treatment temperature will be presented at the meeting. 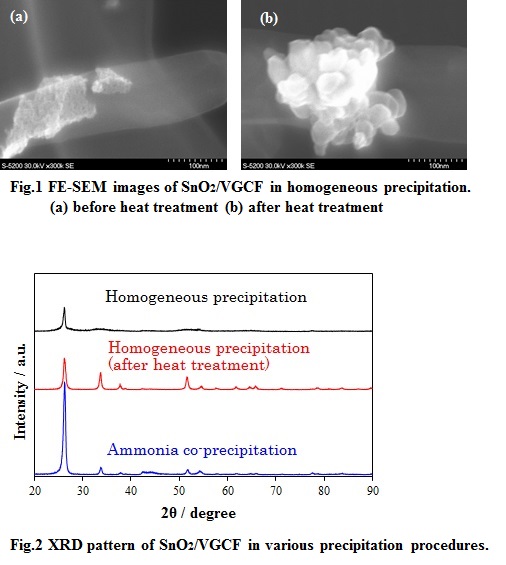