Borein B (Hyatt Regency)
H. Erikson, A. Sarapuu (Institute of Chemistry, University of Tartu), K. Tammeveski (Institute of Chemistry, University of Tartu), J. Solla-Gullón (Instituto de Electroquímica, Universidad de Alicante), and J. Feliu (Instituto de Electroquímica, Universidad de Alicante)
In recent years palladium has proven to be a good alternative to platinum in low-temperature fuel cell cathode catalysts.1 The electrocatalytic activity of Pd catalysts toward the oxygen reduction reaction (ORR) can be improved by preparing shape-controlled nanoparticles.2
The aim of this study was to investigate the electrocatalytic activity of carbon-supported Pd nanocubes of different size and varied metal loading toward the ORR. CTAB or PVP were used as capping agents to prepare the Pd nanocubes of different sizes.
The morphology of Pd/C catalyst was evaluated using transmission electron microscopy, which showed that the particles are cube shaped and their size depends on the synthesis method. The thermogravimetric method was used to determine the Pd loading on carbon. The nominal Pd contents of the prepared catalysts were 5, 20 and 50 wt% and the measured content deviated only slightly.
Electrochemical experiments were carried out in acid and alkaline solutions. The catalysts were electrochemically characterized by cyclic voltammetry and by oxidation of pre-adsorbed CO. Both electrochemical methods showed characteristics that can be attributed to Pd(100) facets that are predominant on cubic Pd nanoparticles. From cyclic voltammograms the electrochemically active surface area was found, expectedly it increased with increasing Pd content in the catalyst and also with decreasing the particle size.
The ORR studies in 0.5 M H2SO4 showed that the half-wave potentials increase with palladium content and with decreasing the particle size, following the changes in the electrochemical surface area. The mass-activity of the catalysts did not depend on the Pd loading, but increased with decreasing the particle size.  From the rotating disk electrode studies the number of electrons transferred per O2molecule was found to be near 3.5, showing that some hydrogen peroxide is formed. The Tafel analysis revealed that the ORR mechanism on carbon-supported Pd nanocubes was the same as on bulk Pd.
In alkaline media the half-wave potentials were in the same order as in acid solution, but more subtle differences were evident. The Koutecky-Levich analysis of the RDE data showed that the number of electrons transferred per oxygen molecule was 4 in the whole range of potentials studied. The Tafel analysis showed that the rate limiting step is the sluggish transfer of first electron to O2molecule. 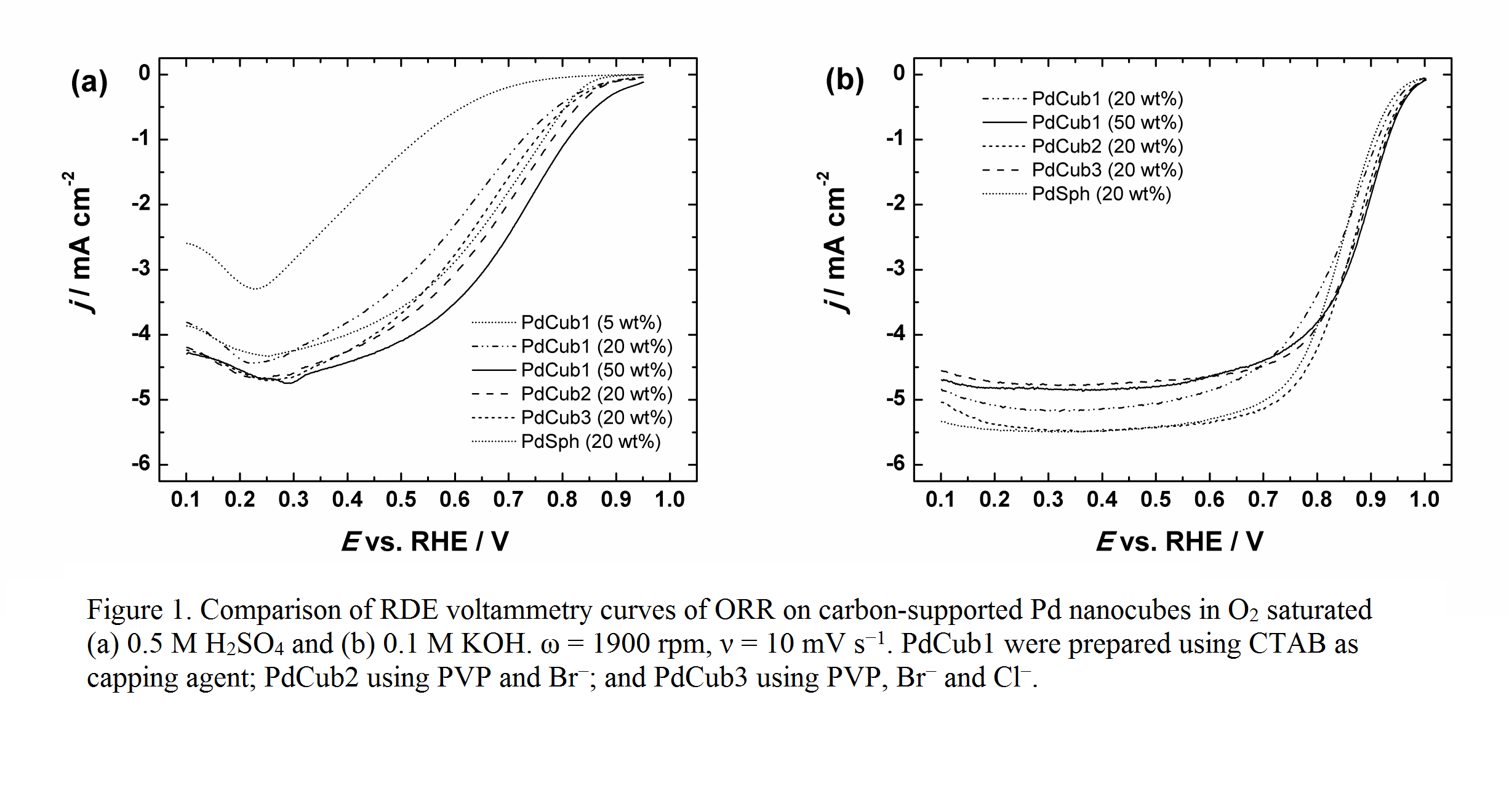