In modern high voltage power semiconductor technologies ion migration is a highly relevant challenge owing to ongoing miniaturization and operation at higher temperatures. Strong electric fields may cause an enrichment of mobile ions in the gate- and field oxide of the transistor which in turn may result in a shift of the threshold or breakdown voltage leading to chip failure. Therefore it is of strong interest to investigate ion migration in modern semiconductor devices.

One of the main contamination sources for mobile ions in semiconductor devices is the molding compound used for encapsulation. These materials consist of various substances such as the polymeric matrix, filler materials for mechanical strength, adhesion promoters and flame retardants. In the elaborated production process of these compounds, mobile ion contamination cannot be avoided. Their small ionic radii and their high abundance make sodium, potassium and chlorine the most critical contaminations responsible for mobile ion induced chip failure. The quantitative analysis of concentration and distribution of these impurity ions in modern semiconductor devices is thus urgently needed.

A promising analytical technique for measuring the concentration of these ion contaminations is inductive coupled plasma mass spectroscopy (ICP-MS).

In the present work a measurement setup based on thin film samples with simplified well-defined geometry was used to measure ion migration in encapsulation materials [3]. To that purpose thin samples of standard processed mold compounds were assembled between two silicon wafer electrodes with well-defined silicon dioxide layers between the mold compound and the electrodes. The sample was heated and a bias was applied between the silicon electrodes. Mobile ions moving from the mold compound to the silicon dioxide / silicon interface were monitored by current measurements. The measurement setup is shown in figure 1.

After the measurement the mold compound was removed. Time of flight secondary ion mass spectroscopy (TOF-SIMS) depth profiles of the remaining silicon dioxide layers were recorded, which showed that mobile ions such as lithium, sodium potassium and chlorine moved to the silicon dioxide / silicon interface. Due to the fact that only mobile ions were able to penetrate the silicon dioxide layer, identification and quantification of the migrated ions was possible without the influence of the non-migrated ions, which remain in the mold compound. These measurements can be an important tool to compare different mold compounds and evaluate the risk of mobile ion migration. 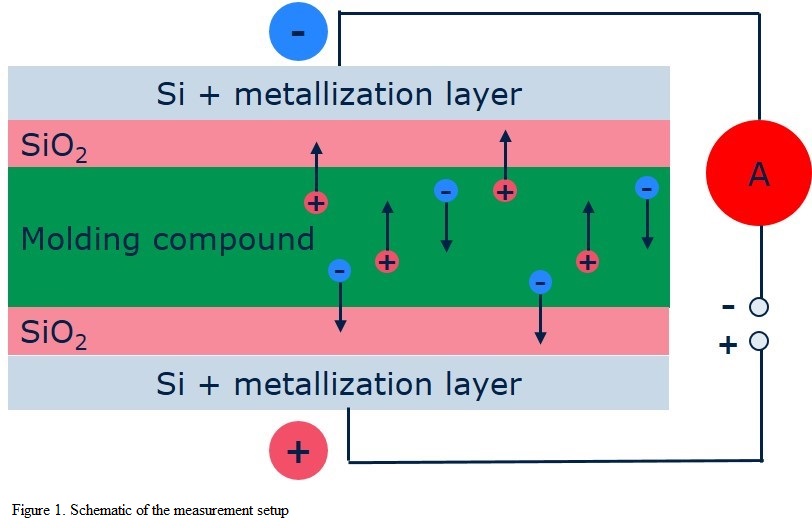