The search for renewable energy sources is motivated by a decrease in the reserves of fossil fuels and rising environmental degradation. Researchers have studied the use of ethanol as a sustainable fuel, due to its several positive characteristics, such as low toxicity and wide availability. However, the ethanol oxidation reaction (EOR) has parallel reaction routes that release lower number of electrons than result from CO2 formation [1]. To address this challenge, ethanol electroxodiation at intermediate temperatures using solid acid electrolytes has been proposed [2]. In the present work, the EOR was investigated at low temperature, using aqueous H2SO4, and at intermediate temperature, using solid CsH2PO4, as electrolytes. The reaction products for the catalysts, carbon-supported combinations of Pt, Ru and Sn, were investigated by on-line mass spectrometry using a Dual Thin Layer Flow Cell for room temperature, and a tip inlet setup for the mass spectrometry measurements at intermediate temperature.

The Pt3(SnOxRuOx)1/C electrocatalysts were synthesized via thermal decomposition of the precursor metal salts, adapting a previously published method [3]. Pt/C (E-TEK) was also studied for comparison. The atomic composition was estimated by X-ray energy dispersive spectroscopy (X-EDS) analysis, and structural features were investigated by X-ray diffraction (XRD) measurements. Synthesis of CsH2PO4 and fabrication of the CsH2PO4-based electrochemical cell, with Pt/C serving as the cathode, followed previously published procedures [2]. A dynamic hydrogen electrode was used as reference (humidified H2). The m/z signals of 22 (CO2), 29 (acetaldehyde), 44 (CO2 + acetaldehyde) and 15 (acetaldehyde and methane) was utilized during the DEMS measurements.

Fig. 1 presents the faradaic currents (a) and the mass signals (b) m/z = 22 and (c) m/z = 29 (insets) obtained during potentiostatic measurements of ethanol electro-oxidation (0.1 mol L-1) in the DEMS equipment, at room temperature, catalyzed by Pt3(SnOxRuOx)/C and Pt/C. One can be observed a deactivation of the currents (faradaic or ionic) as a function of the time, for both electrocatalysts, with the CO2 signal (m/z = 22) dropping to zero. The stripping of the adsorbed reaction fragments (Fig. 1(d)), revealed that the poisoning species are CO and CHx. These species may accumulate during the course of the ethanol oxidation reaction in this potential domain.

On the other hand, for the measurements conducted at 245oC, and at 0.5V and 0.8V, the faradaic current and the ionic signal for CO2 formation underwent no decay (Fig. 2). Additionally, the trimetallic electrocatalyst, presented much higher activity for the EOR than did Pt alone. While the calculation of the faradaic current efficiency for CO2 formation at intermediate temperature is still in progress, initial results showed much higher values for both electrocatalysts when compared to the values obtained at room temperature. 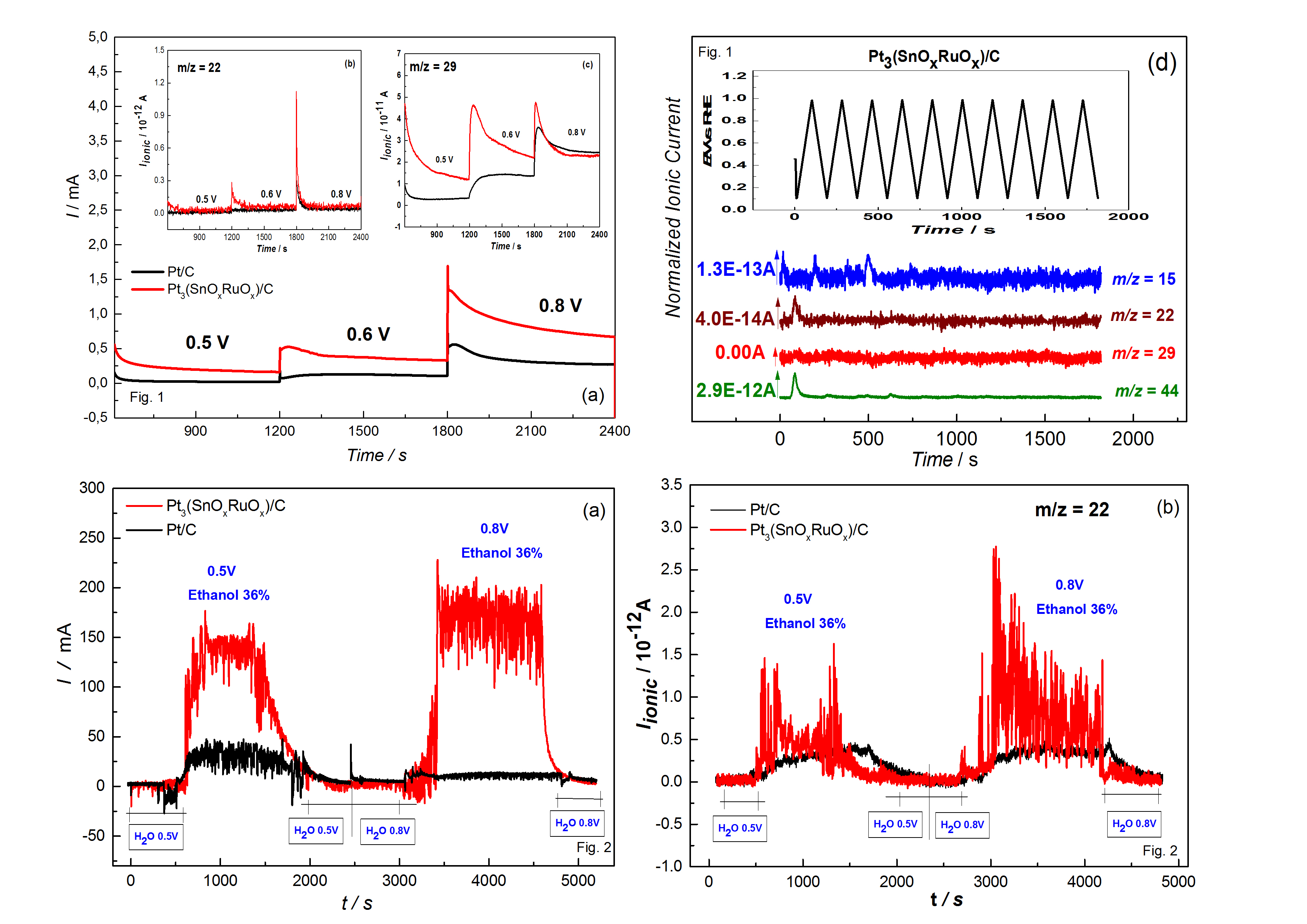