Copper interconnects are typically grown electrochemically as electrodeposition provides a means of depositing large amounts of material over complex geometries and is easily scalable. However, electrodeposition generally results in film microstructures that adversely affect resistivity and electromigration properties. Electromigration rates increase due to surfaces and grain boundaries, and this problem may worsen as smaller device scales lead to larger surface area to volume ratios. Chemical additives are typically used in electrolytes in order to mitigate these problems. Several additives often must be used to manufacture a high quality film, and the relative concentrations of additives can have significant impact on the microstructure of the film. Unfortunately these additives are poorly understood, and their effects are complex and empirically derived, which slows improvements in electrodeposition processes that rely on these additives.

Mediating electrochemical deposition with under potentially deposited (UPD) monolayers of another elemental metal provides a controllable means of affecting the microstructure of the deposited film. The technique requires only one additive to the deposition solution, the mediating metal. This mediator must meet only a few characteristics. The mediating element must be less noble than, exhibit under potential deposition on, and not alloy with the deposited metal. The technique has been previously demonstrated for silver deposition on a single crystal gold substrate. [1,2] In this study, we extend the process to electrodeposition of silver and copper on industrially relevant polycrystalline substrates.

We present resistivity data that demonstrate improvement over unmediated growth. In situ stress measurements of the growing films indicate UPD deposition significantly reduces the intrinsic stresses of deposited films. Atomic force microscopy images of the films are presented to show the effects of UPD on growth mechanism, surface roughness and grain sizes. We present Rutherford backscattering data to show the purity of the deposited films. Finally, we report the filling characteristics of UPD mediated deposition of Cu films on patterned Si substrates.

Based on experimental results, we discuss how mediated deposition can be applied to improve the quality of electrodeposited copper for interconnect applications to improve electrical resistivity. We also discuss how this deposition technique might be applied to other film/substrate systems to tailor resistivities, intrinsic stresses, and microstructures of electrodeposited films.  We also propose that the demonstrated correlation between intrinsic film stress, grain size and resistivities might be used for qualitative characterization of deposited films. 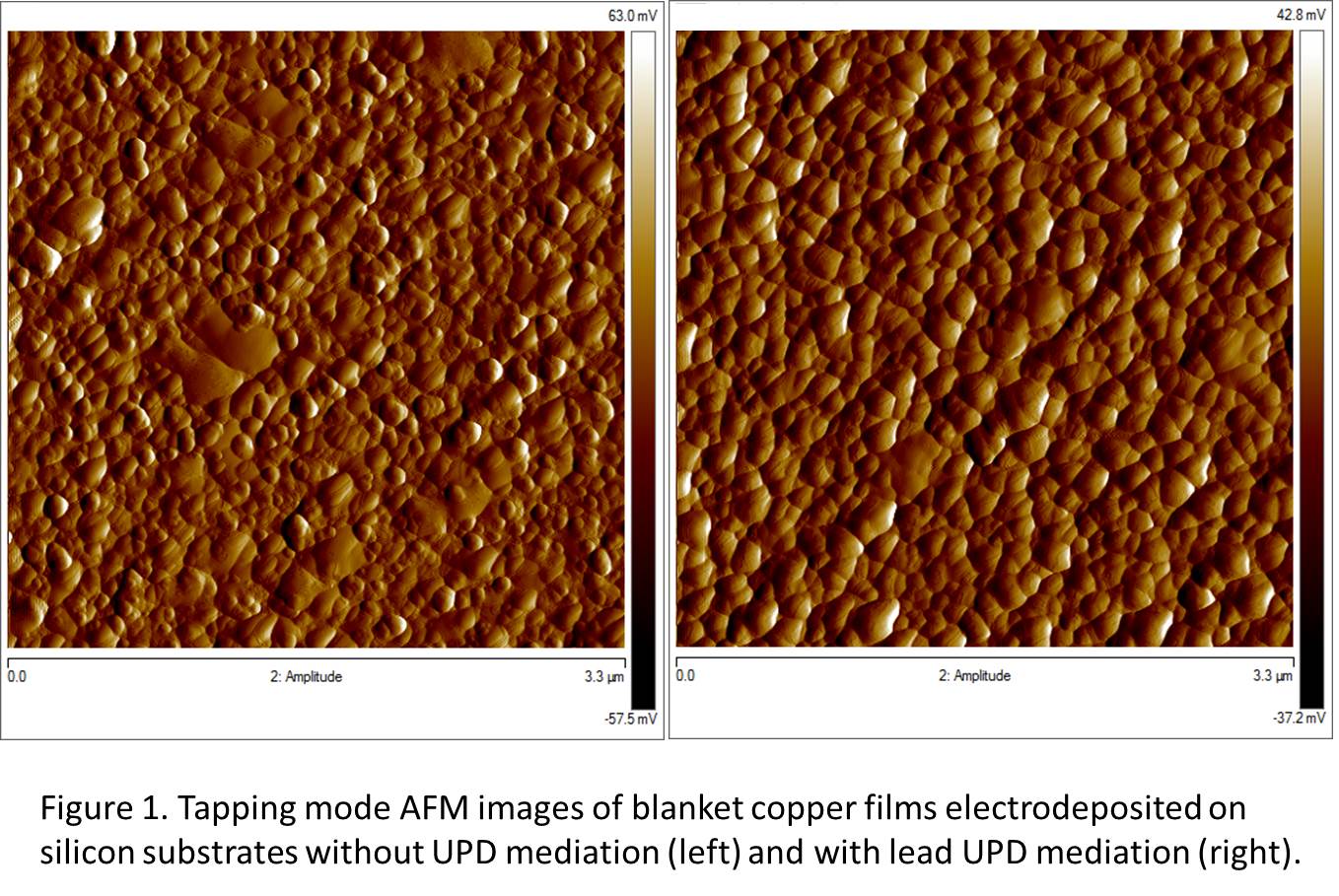