Direct formic acid fuel cells, DFAFCs, have attracted as the alternative electric power source for the hydrogen fuel cells with a polymer electrolyte, PEFCs, due to the easy handling of the liquid fuel and the low operating temperatures. However, the power density of the DFAFCs are half or a forth comparing to that of PEFCs. Therefore, the enhancement of the catalyst activity is required in order to improve the power density of DFAFC. Ito et.al reported that PtRu nanoparticles supported on TiO2-embedded carbon nanofibers, PtRu/TECNF, showed a grate methanol electro- oxidation activity [1]. In this study, nanoparticle- embedded carbon nanofibers, PECNF, were proposed as a promising support of the Pd catalyst for the formic acid oxidation reaction. We prepared the PECNFs which contained three different nanoparticles (TiO2, SiO2, Vulcan XC-72R) as a support of the Pd catalyst and compared the formic acid oxidation reaction (FAOR) activities.

The FAOR activities of the prepared catalysts were evaluated by the cyclic voltammetry, CV, in a three-electrode cell with a fixed glassy carbon electrode (GCE) (3-mm diameter) at room temperature. The electrolyte solution was a 3 M formic acid containing 0.5 M H2SO4. The CV measurements were conducted in the potential range from 0 to 1.2 V vs.NHE at the scan rate of 20 mV s-1 with N2 bubbling at room temperature.

Figure 1 shows the SEM images for the PECNFs obtained after steam activation. The surface of CNFs is flat, on the other hand, that of SECNFs is bumpy. We also confirmed that the surfaces of TECNF and CECNF were bumpy. The average diameter of fiber is approximately 300 nm in all the samples irrespective of with or without nanoparticles. Figure 2 shows the effect of the nanoparticles embedded in the CNF on the CV profile. For the comparisons, Pd/CNF and Pd/C were also shown in Fig.2. The highest FAOR activity of 3151 mA mg-Pd-1, which is 12.6 times higher than that of Pd/C, was obtained in the case of Pd/SECNF. Pd/TECNF and Pd/CECNF also showed higher FAOR activity, 618 mA mg-Pd and 1010 mA mg-Pd, respectively, than that of Pd/C. On the other hand, Pd/CNF showed lower FAOR activity than that of Pd/C. Therefore, it is found that the fiber structure was not contributed to the high FAOR activity. It has been reported that SiO2 and TiO2 showed strong metal-support interaction. Due to this, SECNF and TECNF showed higher FAOR activity. In case of CECNF, Vulcan contained in the CNF was carbonized and activated by steam with CNF. There is a possibility that Vulcan embedded in the CNF showed stronger metal-support than the Vulcan used in Pd/C by doing these treatments. Moreover, it is considered that the high activity of the PECNF is influenced by not only metal-support interaction but also the electrical conductivity. Based on these results, it was confirmed that the PECNF is the promissing support of the Pd for the FAOR. The highest catalyst activity was obtained using Pd/SECNF. This might be mainly attributed to the metal-support interaction between SiO2 and Pd

Using PECNF, the FAOR activity was enhanced irrespective of the nanoparticles. Pd/SECNF showed the highest FAOR activity comparing to that of the other catalysts prepared in this study.

This work was supported by JST, PRESTO. 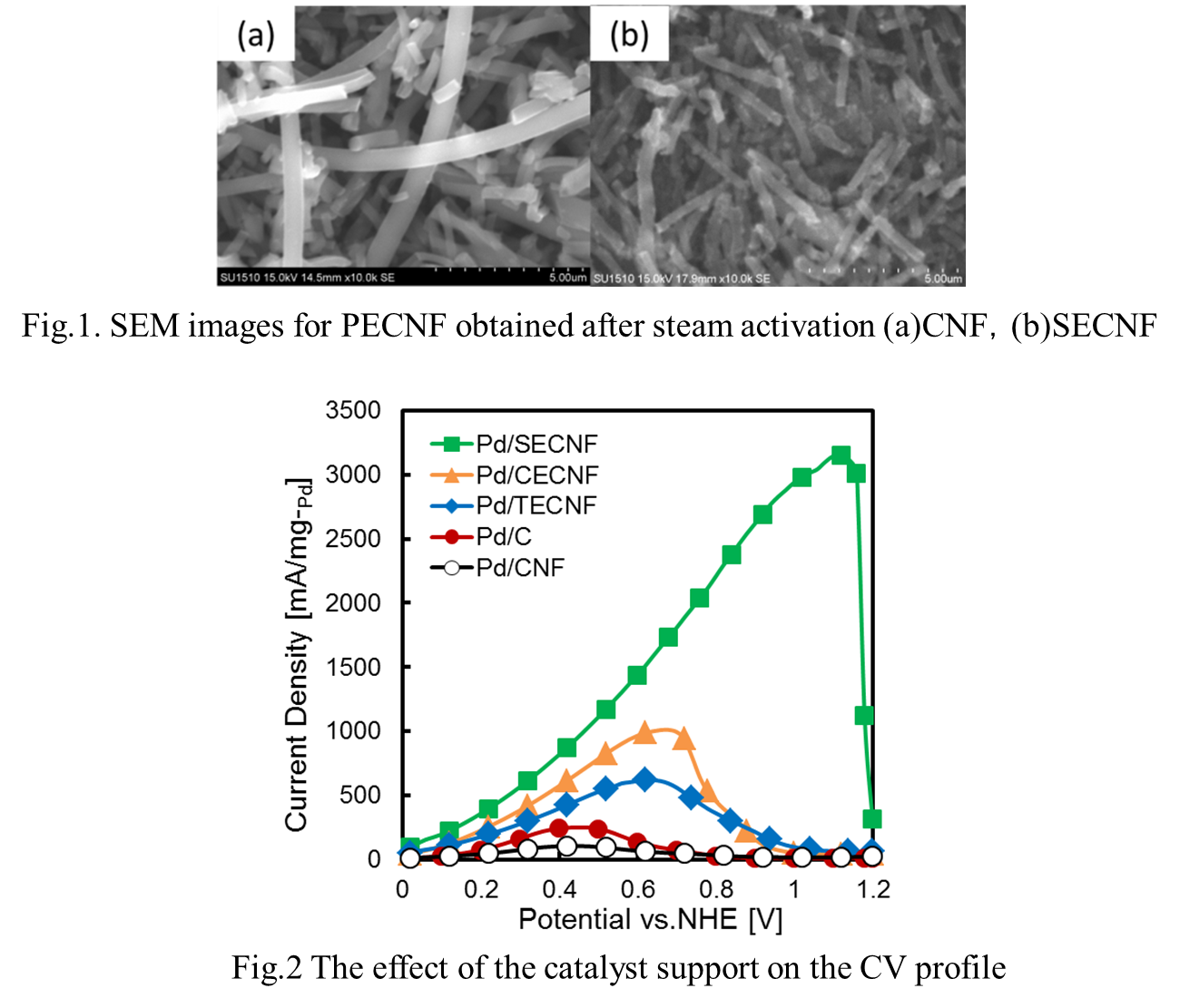