HOPG substrate was scraped by Scotch tape in air and cleaned by annealing at 773 K for 30 min in ultra-high vacuum (UHV). Au-modified Pt NPs with various Pt/Au atomic ratios were prepared on the substrate by sequential APD of Pt followed by Au. The prepared samples are denoted hereafter as Aux/Pt100 NPs (where x is the atomic ratio of Au against Pt). The substrate temperature during depositions was kept at 773 K to control the size distribution of the Pt NPs and to activate thermal segregation of additionally deposited Au on the APD-Pt NP surfaces. The deposition weights of Pt and Au were evaluated by a quartz crystal microbalance and controlled by pulse repetitions of APD. The Aux/Pt100 samples were transferred from UHV to EC apparatus set in a N2-purged glove box without exposure to air. EC properties of the samples are evaluated by cyclic voltammetry (CV) and linear sweep voltammetry (LSV) in 0.1 M HClO4. ORR durability was investigated from change in ik at 0.9 V by applying square PCs between 0.6 (3 s) and 1.0 V (3 s) in oxygen-saturated 0.1 M HClO4 at ca. 20˚C and 80˚C. Surface morphologies of the Pt100 and Aux/Pt100 NPs before and after applying the PCs were observed by scanning probe microscopy (SPM).

Fig. 1 presents CV curves of the as-prepared Pt100 and Aux/Pt100 NPs on HOPG substrate. Electrochemical hydrogen adsorption charges, particularly, characteristic currents located around 0.13 V decrease with increasing Au atomic ratio (x), suggesting Au preferential terminations of the lower-coordinated sites of Pt NPs, such as corners and edges. Changes in ik value of the Pt100 (green) and Au7/Pt100 (purple) during applying the PCs at 20˚C were summarized in Fig. 2(a). As for the Pt100, normalized ik values steeply decreased with increasing PC numbers: the value estimated after 10k PCs were about 60% of the initial one. By contrast, decay in ik for the Au7/Pt100 is clearly suppressed by additional deposition of Au. Similar trends are also observed under applying PCs at 80˚C (Fig. 2(b)). The ORR durabilities estimated from PCs-dependent decays in ik correspond well with SPM images of the Pt100 and Au7/Pt100 (Fig. 2 inset). An average diameter of the as-prepared Pt100 NPs (estimated to be approximately 4 nm) is almost same as for the Au7/Pt100. Although the Pt NPs considerably agglomerate by the PCs irrespective of the PCs-temperatures (20˚C and 80˚C), a slight additional deposition of Au (Au7/Pt100) greatly suppresses agglomeration of the Pt NPs. The results obtained in this study clearly reveal that Au atoms located at coordinatively-unsaturated sites, e.g., edges and/or corners of Pt NPs, can enhance EC structural stability through suppressing unsaturated-site-induced NPs degradations.

This study was supported by NEDO of Japan. 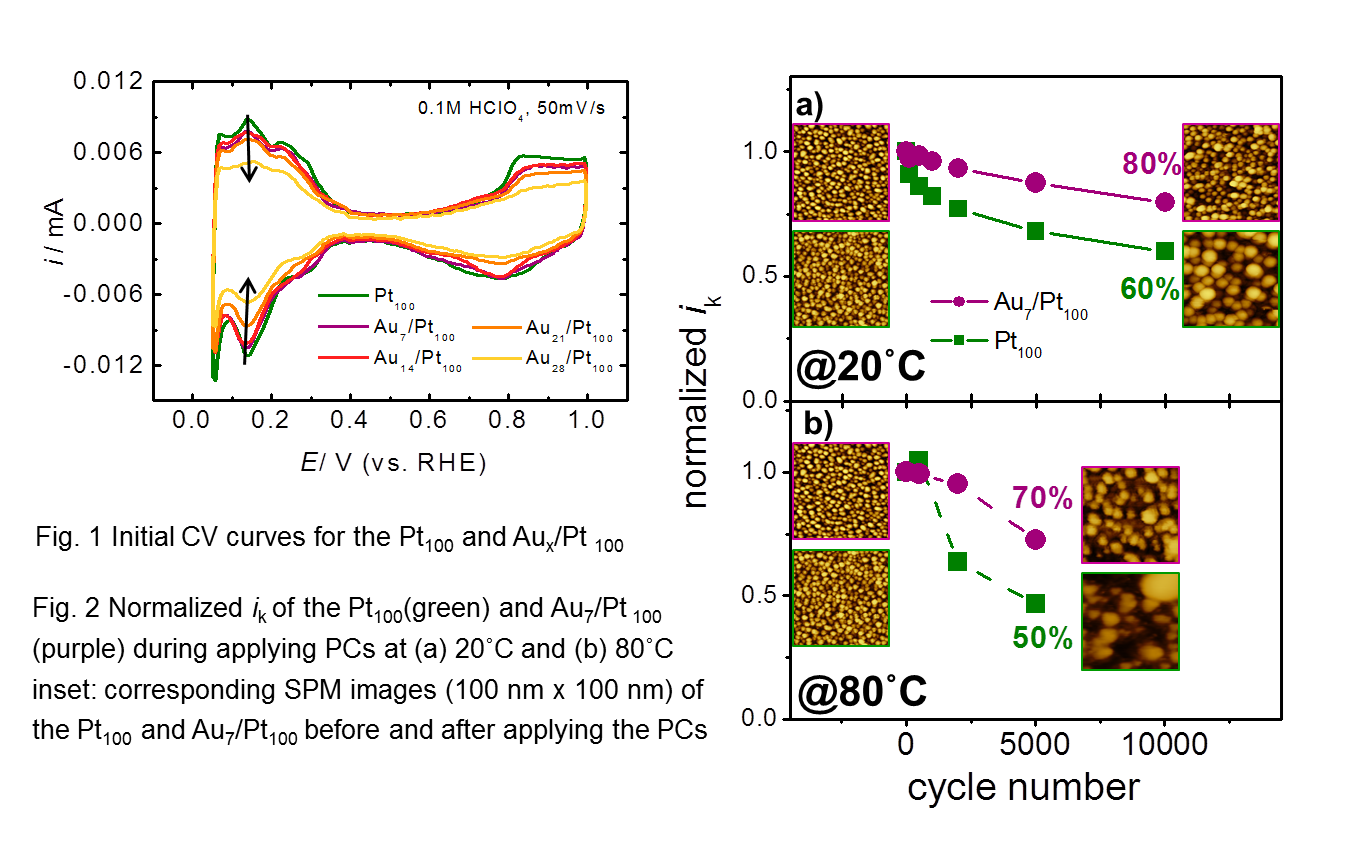