Curtis B (Hyatt Regency)
K. Kinoshita (Tottori University)
Research and development of resistive memories advanced from the standpoint of circuit [1,2] and material design technologies [3]. However, controlling memory characteristics, such as switching voltages, by selecting materials used for electrodes and memory layers and by controlling their crystallinity seems not to be very effective for conducting-bridge memory (CB-RAM). Under the circumstance, it was reported that both switching voltages and reset current were decreased by providing water to the HfO2 memory layer in CB-RAM with a Cu/polycrystalline HfO2 (poly-HfO2)/Pt structure [4]. These results suggest that water absorbed in grain boundary due to capillary condensation causes the migration of Cu ions through electrochemical dissolution and diffusion. Therefore, we consider that the poly-HfO2 layer should not be regarded as a diffusive medium for the migration of Cu ions as ever but should be regarded as a natural nano-porous body that absorbs water, where the pore corresponds to grain boundary.

In this paper, we propose the concept of ‘pore-engineering’ as a method for controlling device performance, through (i) the kind and property of solvents, (ii) the shape and size of the pores, and (iii) the physical and chemical properties of the pore surface. In particular, the stable switching operation with reduced switching voltages that is robust against environmental change was achieved by providing ionic liquid (IL) to the poly-HfO2 memory layer of a Cu/poly-HfO2/Pt structure, evidencing the item (i).

First, forming voltage (Vform) was confirmed to be drastically decreased from the value of Vform in solvent-non-supplied Cu/poly-HfO2/Pt structures by supplying water. Then, we investigated the temperature dependence of Vform in water-supplied samples.Vform increased with decreasing temperature, suggesting that the cooling of water hinders the ionization and migration of Cu ions. Nevertheless, Vform at -30 °C was still smaller than Vform of the solvent-non-supplied samples in the atmosphere at RT. These results suggest that the HfO2 layer plays a role as a nano-porous body and water that is absorbed in the grain boundary plays a key role on the resistive switching.

Figures 1(a) and (b) respectively show cumulative probabilities of Vform and Vset for water-supplied (squares) and solvent-non-supplied (circles) Cu/HfO2/Pt structures in the atmosphere. Both Vform and Vset are reduced by supplying water. However, we also confirmed that RS of water-supplied samples was unstable against environmental changes such as changes in temperature, voltage, and ambient pressure, due to the instability of the liquid phase of water. Therefore, stable solvent that can reduce switching voltages and can be replaced with water is necessary for the practical use of CB-RAM. Cumulative probabilities of Vform and Vset for IL-supplied samples (triangles) show that switching voltages can be reduced by supplying IL more effectively than by supplying water. In addition, thanks to the wide potential window and low vapor pressure of IL, high robustness against voltage stress and stable RS in vacuum were achieved respectively in IL-supplied samples. The high effectiveness of supplying solvents in the improvement of memory characteristics strongly supports the validity of the pore-engineering. 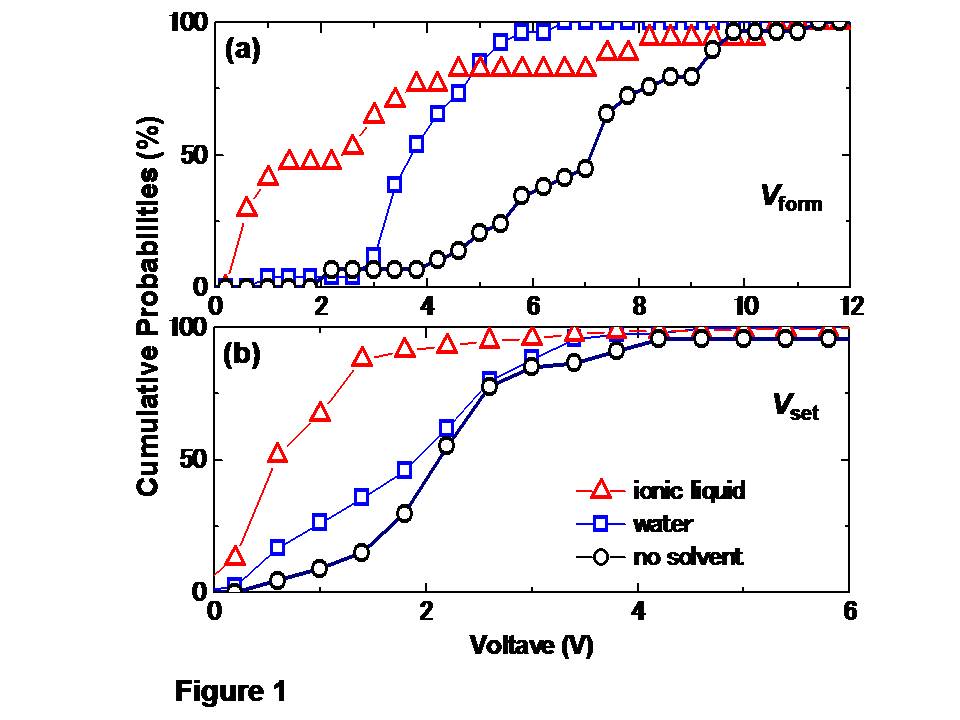