625
Hydrogen Entry into Steel Under an Aqueous NaCl Droplet

West Hall 1 (Phoenix Convention Center)
S. Kaneko, E. Tada (Tokyo Institute of Technology), and A. Nishikata (Tokyo Institute of Technology)
In recent years, high-strength steels have been developed vigorously for the saving of energy and various resources. The high-strength steels have been widely used in many engineering fields such as automobiles and construction. However, the steels are generally susceptible to hydrogen embrittlement or delayed fracture with increasing their strength. When the steels are exposed to atmospheric corrosion environments, hydrogen atoms can be generated by corrosion reaction and can be absorbed into the steels. The absorbed hydrogen atoms can cause hydrogen embrittlement. Therefore, it is needed to clarify hydrogen entry mechanism into steels in atmospheric corrosion environments. In this study, hydrogen entry into a steel under an aqueous NaCl droplet is investigated by the measurements of hydrogen permeation current and corrosion potential.

A sheet of plain carbon steel (0.018%C, 0.01%Si, 0.18%Mn, 0.017%P, 0.007%S, bal. Fe) was used as a material. The sheet was cut into a small coupon of 25mmw x 35 mml x 0.7 mmt. Both surfaces of the coupons were abraded to P1200 grit with SiC papers and then chemically etched to a mirror-like surface finish. Hydrogen entry into the steel coupon was investigated by Devanathan-Stachurski method1. The steel surface for hydrogen withdrawal was electroplated with Pd ca. 400 nm in thickness. Test solution filled in the hydrogen-withdrawal-side cell was 0.2 M NaOH. In the cell, the Pd-plated surface was polarized at a constant potential of + 0.1 V vs. an Ir wire. On the opposite surface to the Pd-plated one, which is a bare surface of the steel used for hydrogen entry, an aqueous NaCl droplet of 30mL was put and it was left for drying in atmosphere at ambient temperature for the first corrosion process. For the later corrosion cycles, the same amount of Milli-Q water (18 MWcm) was placed on the steel surface as often as the droplet dried up. During the corrosion cycles, hydrogen permeation current was monitored simultaneously with corrosion potential of the steel measured with a home-made Kelvin probe (KP). 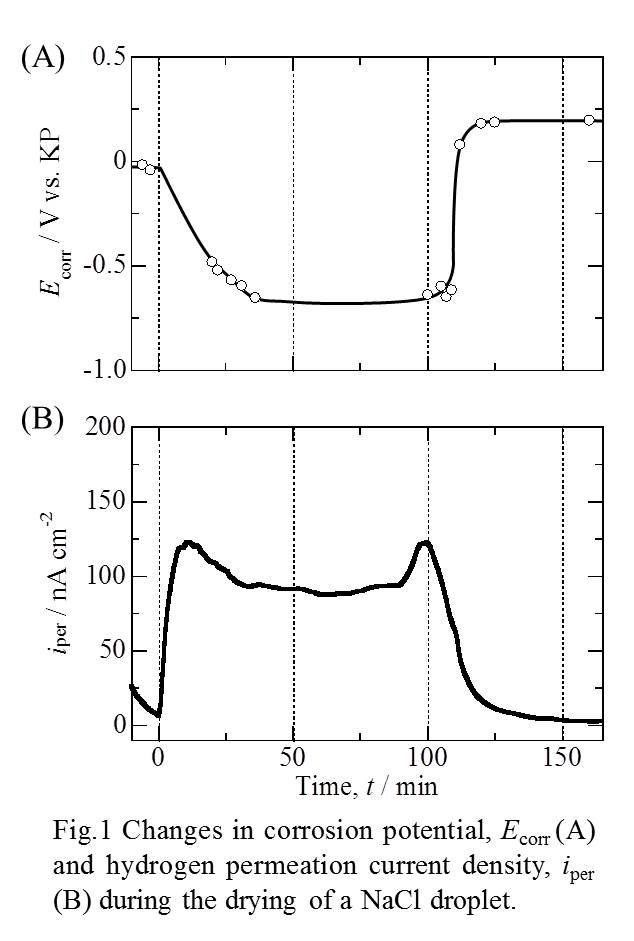